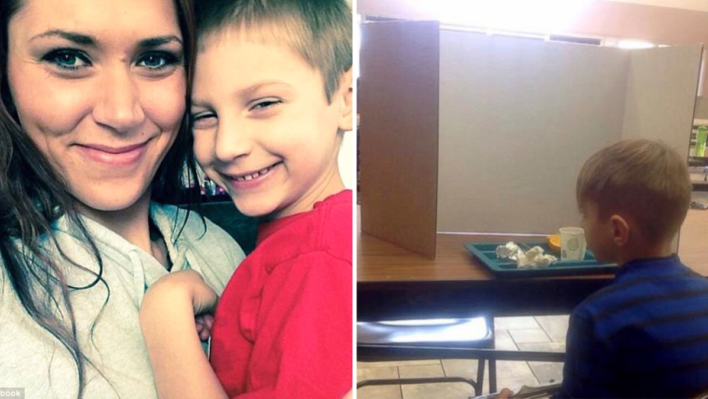 When a school bullied a young boy in a heartless fashion, his mother spoke up and the community did the rest.
By Bryan Liquor    October 26, 2022

When a school bullied a young boy in a heartless fashion, his mother spoke up and the community did the rest.

Nicole Garloff couldn’t believe her eyes. What she saw sent her into a rage. Indeed, it would make any mother’s stomach turn. And to think, it all started because she dropped off her 6-year-old son, Hunter Cmelo one minute late to school. Garloff was having a tough time with her osteoporosis that day plus her car had stalled, again.

As per Worldnews10, Hunter was so worried he would get detention for being late that his mom came at lunch to check on him.

What she found was her son in the cafeteria, sitting by himself behind a partition. His cup had ‘D’ for detention as he sat in tears, humiliated.

After taking her son home for the day, a livid Garloff went into mama bear mode.

How an Angry Mother Defended Her Bullied Son

With the motivation to act, she took a picture of her shamed son at school and posted it to Facebook. When Hunter’s grandmother got her hands on the post, she shared it with some strong words.

“This is my grandson, Hunter. He’s a little first grader. His momma’s car sometimes doesn’t like to start right up,” she started before describing the entire story.

“The principal is responsible for this. His mom found him there, crying, and took him home for the day. Anyone want to help me flood this lady principal with calls telling her how inappropriate this is?” she went on to say.

Her post went viral, with over 75,000 shares. Her call to action was also a success, as the school district was blasted with angry calls and bad reviews on its Facebook page.

Yet, the real surprise to celebrate would soon follow.

How a Community Surprised a Mother With a New Car

When Garloff and Hunter’s father Marc Cmelo stopped by Kelly’s Automotive Service to pick up their car from the shop yet again, they were preparing for news that it couldn’t be fixed. Instead, they got the shock of their lives.

Upon greeting Hunter’s parents, Lisa McClease-Kelly pointed and said “You see that minivan sitting right there? It’s yours,” as she handed them the keys.

It turns out that after hearing Hunter’s story, the people and businesses in Garloff’s community wanted to help. And so, they teamed up with the car dealer to gift his parent’s a smooth new ride to drive him to school in.

How a Community Showed That Love Wins Every Time

Hunter’s father was floored by the gift. “I’m just blown away to see the community come together like this and see that there’s still good people out there,” he said.

It’s hard to believe that a school whose role is supposed to be to teach our kids to be our adults of tomorrow did something so cruel to an innocent boy.

RELATED: Little Boy Denied Food On His Birthday Because Of $9 Lunch Debt – His Grandmother Has The Best Response

After all, how do you punish bullies when you’re acting like one? Let’s hope they have a moment of self-reflection after this.

While there’s no undoing what has already happened, at least Hunter can see that while the world can be cold at times, there will always be people who care to warm it up.

Teen Born With a Drug Addiction Eats Lunch Alone Everyday – Then, the First Day of School Changed Everything