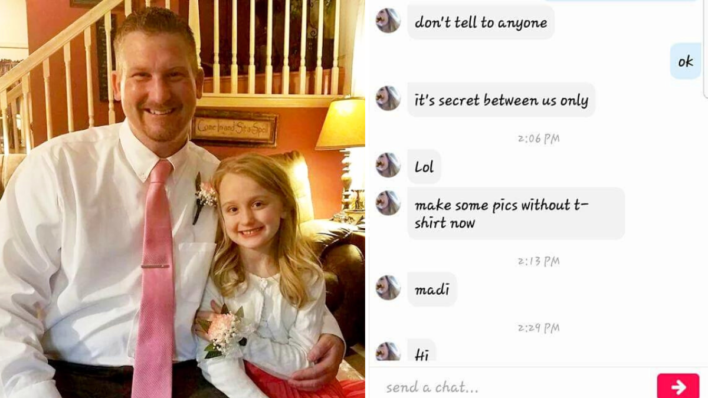 One dad saves his daughter by stepping in when a stranger begins to harass her online.
By Lindsey Staub    October 28, 2022

One dad saves his daughter by stepping in when a stranger begins to harass her online.

In the age of social media, parents have had not only to teach their children how to stay safe in the face of danger from strangers in person, but also online.

Unfortunately, one family learned to do this the hard way.

In 2017, the parents of a little girl had to help their daughter navigate the internet after a predator contacted her over social media.

Brad Summer’s daughter Madi used Musical.ly on his and his wife’s phones when they were with her.

“She used this app to connect with her cousins and make goofy duets of songs together,” Brad explained. “I never thought of someone pretending to be 9 to gain access to my child. We live and learn and I continue to do so every day as a parent.”

Madi’s mother shared the incident on Facebook where it garnered over 16,000 reactions and 73,000 shares within 10 days.

“To our FB friends; Today we went through something that I feel needs to be shared,” Brad wrote. “Our daughter has an app that she has been using with some friends and family members that went from fun, to making me furious. The name of this app is called Musical.ly.”

Brad then recounted the story to his followers.

On the app, someone posing as a nine-year-old friended Madi and they began to message each other back and forth. Not long into the direct messages, the stranger requested that Madi send him photos of herself topless.

“First I want to say how proud of our daughter I am and want this to be a warning to your families,” Brad said. “Please, tell your kids to let you know if anyone ever asks something like this, let them know it’s okay to tell you. It has helped us in this situation.”

How One Dad Proved the Importance of Openly Communicating With Children

Thankfully, when Madi showed the interaction to her parents, they jumped into action.

“If you’re wondering if we called the police, yes and they have the phone to pull all the information to track this person down. Please feel free to share if you think it can help others,” Brad wrote.

Fortunately, the culprit is unlikely to get away unscathed. The detective looking into this case found the IP address of the person and has submitted a subpoena to Muscial.ly to freeze all of his records.

Because of Brad and his wife’s close involvement with their children, they were able to stop a bad thing in its tracks. Like Brad writes in his Facebook post, parents need to have open communication with their children in order to ensure their safety.