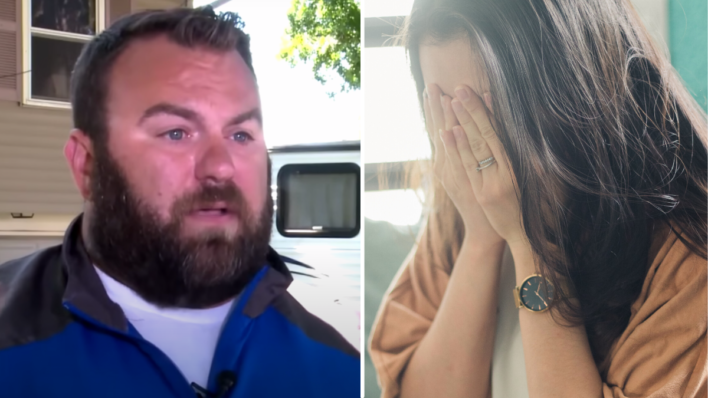 One man’s daughter was asked to weigh herself publicly before getting on a ride.
By Amber Dowling    August 20, 2022

One man’s daughter was asked to weigh herself publicly before getting on a ride.

What was supposed to be an exciting and fun day at the waterpark was soured this summer by unclear ride regulations and a humiliating policy that left one father angry and his daughter humiliated. Now, that father is sharing his family’s story hoping to invoke change.

Andrew Batton took his family to Raging Rivers Waterpark in Grafton, Illinois, this past July for what was supposed to be a regular day out. Batton and his family are season ticket holders and have been for years, and they were all excited to try the park’s latest ride, the Mississippi Monster.

Unfortunately, when Batton’s 13-year-old daughter got to the top of the ride, things turned sour. The new teen was asked to step on a scale and verify her weight, as the ride had a weight limit of 200 pounds. Batton’s daughter stepped on the scale, weighed in at 205, and was told she would have to climb back down the stairs.

RELATED: Angry Dad Stands Up For Daughter Humiliated By Cashier For Buying Her First Pads

Batton was upset because, according to him, that weight limit wasn’t posted anywhere, and had the family known about the rule, his daughter could have avoided the public humiliation of weighing herself in front of a crowd.

“To have a company be responsible for such a massive mental impact on my daughter, it’s tough,” he told a CBS News outlet. “I was like, ‘There’s nothing on the media about that. Was this posted anywhere?’ [The employee] was like, ‘No. We’ve had some people getting hurt, so we’re limiting the weight on the ride.’”

How an Angry Father Is Demanding Change

At first, Batton wasn’t going to share the story, but he revealed he didn’t want anyone else to go through what his daughter did. “The disappointment that she felt by not being able to ride the brand new ride was definitely overshadowed by the public humiliation of being asked to step on a scale,” he added. “Then further than that, being told that you’re overweight.”

The dad added that he was in shock, and his daughter had tears in her eyes, which is hard for any parent to watch. “We as parents now have to undo the emotional damage this corporate company caused us,” he added.

The father is calling on Raging Rivers to do better when communicating safety standards to its guests and employees.

“Let’s leave out the amazingly damaging psychological impact of forcing a young woman to publicly weigh herself, but to have to see my daughter’s face eyes welling up with tears as she was turned away for being FIVE POUNDS OVER!” Batton wrote in a Facebook post, which was also shared by the affiliate.

The employee was extremely upset and explained that this scene has been playing out all day and many people had been upset/surprised by the restriction.

“Raging Rivers has been such a source of joy for my daughter throughout her childhood to have such an amazingly awful experience today has saddened me beyond words, as well as negativity impacted my daughter in a way that I am sure we are going to be discussing in therapy for years to come. And all over five pounds!”

How Raging Rivers Waterpark Responded to the Viral Story

After Batton’s post went viral and news outlets began picking it up, a spokesperson for Raging Rivers revealed the park had already placed an order for tubes that could hold more weight on the ride in question, and they were expected to arrive soon.

“Our goal is never to embarrass anyone, but we must look out for their safety while visiting Raging Rivers. Raging Rivers takes an abundance of precautions to ensure the safety of our guests while enjoying our slides and attractions,” spokesperson Jimmy Holmes said.

“The new Mississippi Monster Slide has a max weight limit of 200 lbs per rider,” he continued. “Signage is located at the base of the slide, alerting guests of this restriction. In addition, there is a scale that all guests who choose to ride the attraction must step on to ensure they meet the safety requirements for the ride. We will continue to follow manufacturer guidelines for safety while offering our guests a fun experience at Raging Rivers Waterpark.”

How Body Positivity Starts With Loving and Accepting All Bodies

While some online have cited that the park is responsible for guest safety and these rules are necessary to avoid injury, many people feel the park could have done better by making rules clear and visible. One idea is to put a scale at the bottom of the ride to help riders learn whether they are eligible. Getting color-coded wristbands when you enter the park is another.

The reality is that issues of body-shaming and perfectionism in media don’t just affect adults. These are also issues that affect children — especially in these situations. We are all worth more than the weight we carry, but there is still a lot of work to be done to educate others in terms of understanding that it’s never okay to comment on another person’s body; especially a child’s.

RELATED: Angry Stranger Yells at Man Carrying His Daughter – What Happens Next Brings Them Both to Tears

In the meantime, learning to love and accept all bodies for who and what they are is always a good first step in achieving better overall body positivity and mental health.

EVERY BODY IS BEAUTIFUL
“Life is so much more beautiful and complex than a number on a scale.” — Tess Munster
Tags
Share
← Prev Post Next Post →