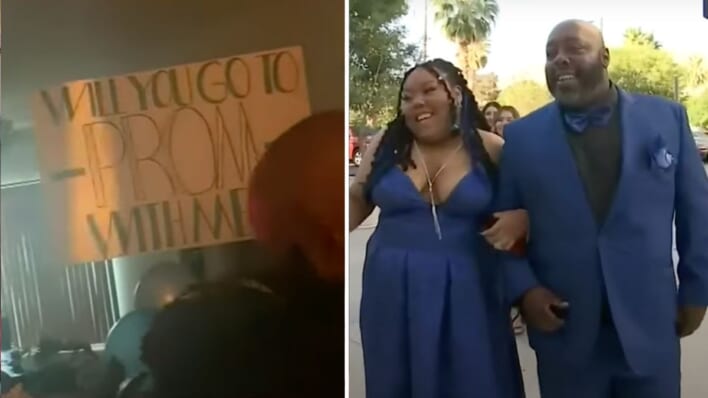 A young woman from Nevada fulfilled a lifelong promise and took her dad, who had never been able to go to his own prom, with her on the special night.
By Sophie Babinski    September 19, 2022

A young woman from Nevada fulfilled a lifelong promise and took her dad, who had never been able to go to his own prom, with her on the special night.

Prom is one of high school’s most exciting milestones. Kids get to dress to the nines, ride in limos, and party together! Usually, when someone misses prom they look back on their formative years and feel that something is missing.

Jermel Jones had never been able to attend prom and always regretted it, even talking to his baby daughter about his feelings. As a little girl, his daughter Janel made a promise to her dad: when she was a teen, she would bring her dad to her own prom.

She figured that that way, he wouldn’t feel like he had missed out. Jermel was touched by the little girl’s promise, but never imagined she would stay true to her word. To his surprise, she did.

The Las Vegas Teen Gives Her Dad an Epic Prom-Posal

Janel’s generation takes prom even more seriously than Jermel’s did. The kids in Janel’s year don’t simply ask one another to prom, they put together elaborate proposals, called prom-posals, in order to get a date. Janel decided that she would ask her dad to prom the right way, and go all out.

RELATED: Dad Builds Secret Room In His House For Daughter – What She Finds Inside Shocks Her

Janel had her friends and family help her make the ask special, and laid out a trail of loving notes that led to her holding a sign asking her father to be her prom date. Jermel was floored. Not only would he finally get to go to prom, but his daughter was putting in the effort to make him feel really special. The whole proposal was filmed and went viral– garnering more than 2 million views.

Father and Daughter Have a Night to Remember

Janel and Jermel didn’t stop at the prom-posal. The night of prom, they decided to continue going all out. They got a hotel room to get ready in, wanting the make the experience feel as glamorous as possible. Then, they rented a limo to get them to the event.

The duo matched in a blue suit and a blue dress when they walked into the school. Jermel felt like the luckiest dad in the world– he wouldn’t have to wait for Janel to open up to him and tell him how the special night went, he was right there to witness it all!

The Emotional Bond of Dads and Daughters

It’s important to never take the relationship we have with our parents for granted. Jermel and Janel got to experience something amazing together, an event that they could tell her children and his grandchildren about. Prom night is now a sweet memory the two will cherish forever. Creating these types of moments is always worth it. This is what life is about.