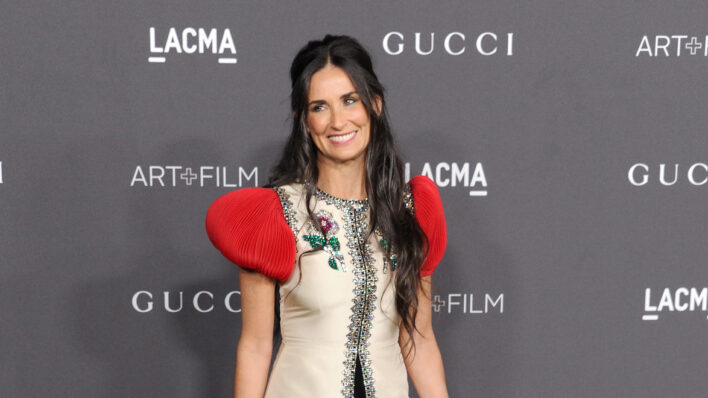 Demi Moore’s relationship with Ashton Kutcher, who was 15 years younger, seemed perfect from the outside. Behind the scenes, the reality was different.
By Shaoni Das    July 21, 2020

Demi Moore’s relationship with Ashton Kutcher, who was 15 years younger, seemed perfect from the outside. Behind the scenes, the reality was different.

Her marriage to Ashton, in fact, had played a massive part in driving her towards her current endeavours. Demi was constantly singled out as a “cougar” in that relationship in that she was an older woman pursuing a romantic relationship with a much younger man. Outside of the obvious double standard, the marriage had been unfair to Demi for more than many reasons.

But a woman of Demi’s resilience was never going to let her life get shattered by what turned out to be a difficult marriage. She was always going to pull through and put her mind to the issues that actually matter.

Ashton cheated on her constantly throughout the marriage

In Demi’s memoir Inside Out, she doesn’t hold back from shedding light on what caused her and Ashton’s marriage to break down completely. In 2011, Us Magazine published an expose on Ashton Kutcher’s extramarital affairs. They particularly referred to one occasion in which the actor slept with two girls on the day of his sixth marriage anniversary. Shortly after, Demi and Ashton announced they were ending their marriage.

In her memoir, Demi confirmed that those reports were in fact genuine. Demi received a Goggle Alert about the scandal and confronted Ashton about it.

I asked if it was true. And he admitted it right away. I think my response was: are you f***ing kidding me? I felt like I could barely take a breath.

It wasn’t the extramarital affair that alone contributed to the decline of the marriage. In her book, Demi also talked about how she and Ashton had taken part in a number of threesomes. She revealed that they had “opened” up their relationship to two different people, none of whom had “bad intentions”, according to Demi. She’d agreed because she wanted to fit herself into the “mold of the woman he wanted his wife to be.”

So when he expressed his fantasy of bringing a third person into our bed, I didn’t say no. I wanted to show him how great and fun I could be […] They were good people, but it was still a mistake. I was strangely flooded with shame, I couldn’t shake the feeling that this whole thing was somehow my fault.

The most brutal aspect of the infidelity was that this wasn’t Demi’s first encounter with a cheating husband. While married with Bruce Willis, she’d discovered that he was “screwing around” quite often. He was also reported to be quite controlling in the sense he wanted Demi to cut back on working and devote more of her time at taking care of their three young daughters.

This is why meeting Ashton at 40 had brought so much hope into her life. Settling into a relationship with a man whose “life was just beginning”, it made her feel like a young teenager again.

Ashton coerced her back into alcoholism — leading to a painful miscarriage

Another matter about which Demi speaks at length is her history with substance abuse and alcoholism. She had been twenty years sober when she suffered a relapse. It had all begun when Ashton was enjoying a glass of red wine and said that he doesn’t believe alcoholism is a real thing, that anyone could control that drinking level if they were sensible and took it in “moderation.”

I wanted to be that girl. The girl who could have a glass of wine at dinner, or do a tequila shot at a party. In my mind, Ashton wanted that, too.

But Demi does maintain that he’s not the “cause” of her foray into alcoholism. She said she just wanted to do things differently and be someone else, someone she wasn’t. One of her binges left her nearly drowning in a hot tub, an incident that made Ashton “furious.”

In another incident, she suffered a seizure after intaking drugs, synthetic marijuana, and nitrous oxide. A lot of people had to witness her body crashing in real-time and even her own daughter was terrified that she was going to see her mother die before her very eyes. The whole emergency was a wake-up call for the actress; she realized that she had to put an end to her addictions or at least begin the measures of doing so.

At 42, the actress suffered a miscarried at six months and had attributed it to her drinking problem.

It was my fault, I felt for sure: if only I hadn’t opened the door to drinking, I never would have lost the baby. Even worse, I was still smoking when I found out I was pregnant, and it took me a few weeks to quit completely. I was wracked with guilt and convinced what had happened was my doing.

Demi was still determined to have a biological child, so she went through IVF and other fertility treatments but to no avail. The whole process made her feel “lost, empty, desperate, confused.” She ended up forgetting about her actual family that loved her so much.

She ended up finding self-love through activism

Demi had felt absolutely torn following the cheating confessions and the divorce that followed. But she still had to put a brave face and take to the red carpet to promote a film. She described it as a form of “self-protection”, a kind of armour that she can don on and disappear from her feelings. The mother-of-three has also admitted that the decline of their marriage shouldn’t be blamed on Ashton alone.

I really know that there are parts of what occurred with this relationship ending that were a level of devastating for me that wasn’t really just about the relationship; it was really about my whole life. It was about being the 2-year-old who wasn’t safe — that this really represented that I’m not lovable, that I’m — I’m not deserving. And that’s not about him. That’s all just about me.

While the marriage did turn out to be awful in the long run, it must also be celebrated for a few things. Demi has always been an activist at heart; she has supported a countless number of organizations and charities throughout her career.

But her and Ashton’s DNA foundation has done tremendous, nearly unprecedented work in tackling human trafficking. The foundation has rescued hundreds and hundreds of victims from sexual slavery and to this date continues to set milestones in that regard. Demi has honoured by multiple organizations for her work with these non-profits.

Despite everything, she still values the marriage with Ashton for a number of reasons.

Whatever pain we went through together enabled both of us to grow into the people we are today.

She’s single at the moment and very much by choice. “Right now I’m focusing on my relationship with myself,” she said. The woman’s been through a lot and it’s taken her over fifty years to realize that she is worthy of being on this earth and she deserves happiness. She’s focused her energies on her daughters and on making this world a better place.

I belong. Here. In myself. In this house. On this planet. I’m in my mid-50s now, I’ve outlived both of my parents, I know that what I walked through was a lot, especially coming from where I came from. The truth is, the only way out is in.

Never change yourself for somebody else

Demi had written in her book that she had always been obsessed with pleasing the men she’d married. She’d “turned [herself] inside out” to be the person they wanted her to be. But at the end of the day, that strategy left her with nothing but pain and trauma. Over time, she realized that staying true to her passions and working to build a relationship with her own self has been the missing piece all along.