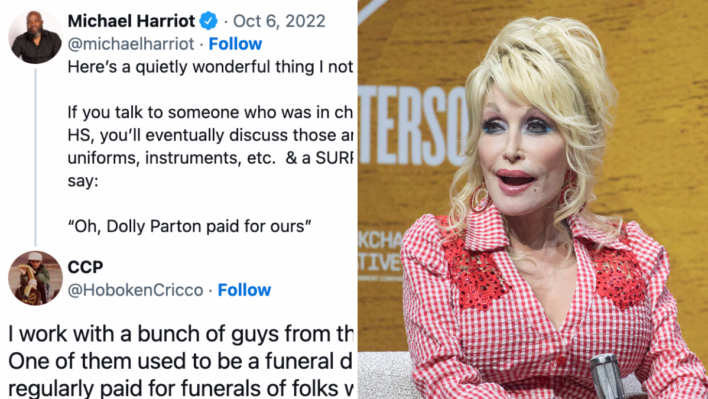 “The woman is a national treasure.”

Dolly Parton is best known for being a musical superstar. She has written or co-written thousands of songs. She has twenty-six number one hits to her credit and has sold more than 100 million records.

She has won countless awards, including 11 Grammys, 4 American Music Awards, 13 Academy of Country Music Awards, Entertainer of the Year, 2 Emmys, a Star on the Walk of Fame, and more. She was also inducted into the Rock and Roll Hall of Fame.

Dolly Parton is a legend.

However, when she’s not making hit records (or breaking them) she’s quietly going about her business making the world a better place.

Parton has long been known for her humanitarian efforts. But she recently made headlines when a tweet revealing a secret about her giving went viral.

Writer and journalist Harriot took to Twitter to divulge that the chart-topping songstress has been covertly funding bands and choirs at majority Black high schools. And she’s been doing it for decades.

He shared that when speaking to former members of high school choirs or bands, he noticed a “quietly wonderful thing” they all had in common — Dolly Parton.

“Here’s a quietly wonderful thing I noticed: If you talk to someone who was in choir or band at a majority Black HS, you’ll eventually discuss those annoying fundraisers for uniforms, instruments, etc. & a SURPRISING number will casually say, “Oh, Dolly Parton paid for ours,” wrote Harriot.

If you talk to someone who was in choir or band at a majority Black HS, you’ll eventually discuss those annoying fundraisers for uniforms, instruments, etc. & a SURPRISING number will casually say:

“Oh, Dolly Parton paid for ours”

People quickly corroborated the story. One person replied to Harriot’s tweet: “30+ years ago I was in high school marching band in East Tennessee. One year we played Sevier County High School…and DANG that band was equipped — uniforms, instruments, flags, everything. Mountain area, much poverty. Paid for by Dolly Parton. That woman is a national treasure.”

Another revealed that she “did this for all 4 of my kiddos.”

Yet another person tweeted: “Can confirm. And to anyone asking why she might do that or why band & music matter, especially to underrepresented communities, do a little research & look at the enormous jumps in graduation rates, SAT scores, & lifetime outcomes. You play a ‘bone, your world grows.”

Dolly Parton Has Decades of Giving Under Her Belt

Secretly paying for uniforms and instruments isn’t the only time that Parton has given to schools. Back in 1988, she founded The Dollywood Foundation in her hometown of Sevierville, Tennessee. It offered $1000 cash incentives to keep kids in school. Today, the foundation continues to grant scholarships to local high school students.

Dolly Parton also started the Imagination Library in 1995, a literacy program that gifts free books monthly to children under the age of 5. Since its inception, it has delivered more than 165 million books to children worldwide.

She credits her father for being the inspiration behind it, saying, “This actually started because my father could not read and write and I saw how crippling that could be. My dad was a very smart man. And I often wondered what he could have done had he been able to read and write. So that is the inspiration.”

RELATED: 42 Years Ago, Interracial Couple Was Forced To Break Up – Today, They Found Their Way Back To Each Other

But her giving doesn’t stop there. According to The Guardian, Parton is also paying the full college tuition fees of all Dollywood employees.

Additionally, she invested her “I Will Always Love You” royalties into a Black community in Nashville, calling it “The house that Whitney built.”

She also made headlines during the pandemic when her $1 million donation to Vanderbilt University helped fund research for the Moderna COVID-19 vaccine.

And while she prefers to keep her charitable works out of the spotlight, her philanthropic work hasn’t gone unnoticed.

“With her philanthropy and her artistry, she has empowered and lifted up the citizens of her Tennessee home county as well as millions more around the world,” a statement from the organization said.

And she has no plans of stopping.

RELATED: 39 Years Ago, Her Father Forbade Her From Being With a Black Man – Today, They Finally Tied The Knot

In her acceptance speech, she said that she “thinks it’s important for everyone to do their share to help their fellow man,” and when you help someone it has the power to help you even more.

“That’s what we should do as human beings,” she continued. “I never quite understood why we have to let religion and politics and things like that stand in the way of just being good human beings. I think it’s important from that standpoint just to feel like you’re doing your part, doing something decent and good and right.”

After all, in the famous words of Dolly Parton, life shouldn’t be “all takin’ and no givin’.”