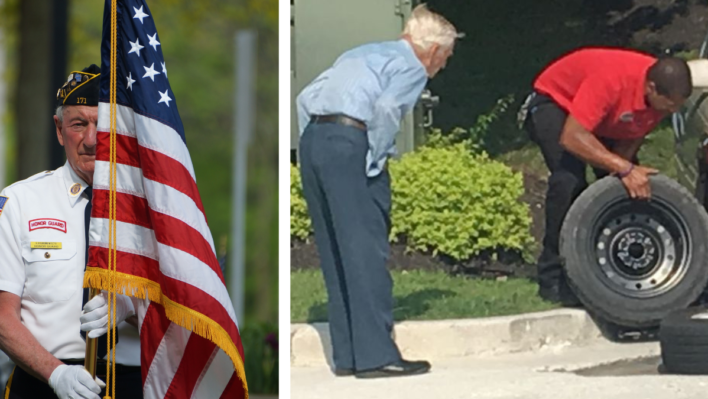 The store employee didn’t think twice before springing into action.

Growing old is one of life’s inevitabilities– the longer we live, the older we get! Some lucky people live to be in their 90s, or even 100s. Those people’s lives span so many important milestones like wars, important civil rights movements, and enormous technological strides.

Despite having survived so much, many older people still struggle daily with loneliness, isolation, and mobility issues (among other things).

Recently, when a 96-year-old World War II veteran found himself struggling with automobile issues, he got help from the most unexpected place.

The Elderly Man Got a Flat Tire on the Highway

Mr. Lee is a regular at Chick-Fil-A in Maryland. As a 96-year-old veteran, he doesn’t have too much to do on a daily basis. Amazingly, though, he is still able to drive, so he takes his car to his local Chick-Fil-A for his favorite meal, a chicken biscuit with a black coffee.

One day, though, things didn’t go as planned. Mr. Lee got a flat tire while on the highway and his long life flashed before his eyes. Driving on only three good tires, Mr. Lee thought he might not even make it to the store. When he did, he was shaken and almost in tears. He approached the cashier, where Rudy Somoza was working.

Somoza could sense just how anxious Mr. Lee was: “He was shaking, almost in tears saying he barely made it to the store on three tires because one was bad.”

Mr. Lee finished his story, telling the employees how he had nobody to help change his tire, and he wasn’t sure how he was going to get home. A manager, Daryl Howard, was taking orders when he overheard the story.

He immediately walked away from his cash and told Rudy that he had to help Mr. Lee change his tire. Daryl got focused, and Mr. Lee’s tire was changed in 15 minutes flat! The veteran was over the moon, grateful that he would be able to drive safely again.

A Manager With a Kind Heart

Rudy and all of Daryl’s other colleagues were not at all surprised that Daryl sprung into action to help the old man. He is widely known for his positive and helpful attitude, as well as his huge heart.

Mr. Lee didn’t stop thanking Daryl when he left the Chick-Fil-A that day. He continued to express his gratitude when he came back later in the week, noting that the incident really touched his heart.

Daryl is a great example of the importance of going above and beyond for those in need. Without his help, Mr. Lee may not have made it home that day. In only 15 minutes, he was able to help Mr. Lee feel safe, secure and less alone. That’s a major win in our books.