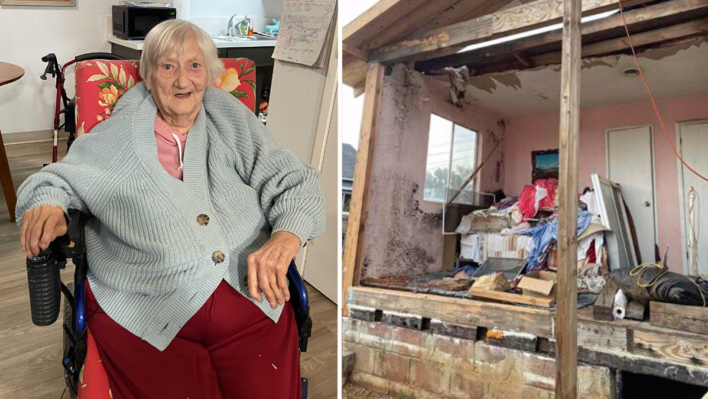 The elderly in our communities are some of the most at-risk people in society. While they’ve lived for longer than most of us and certainly have a lot of precious wisdom to pass down, they often have less physical strength, financial resources, and technological know-how making them vulnerable.

One vulnerable elderly woman was in peril until her neighbors banded together to rescue her.

93-year-old Pearl Graham was known by her community as the “Tulip Lady” because of the beautiful tulip garden she planted every spring.

The colorful flowers brightened the neighborhood and got everyone out of the winter funk, a sign that summer was coming.

So, when her neighbor Kelly Zimmerman walked by her home and saw its shameful condition, she knew she had to do something.

Pearl’s once beautiful home had been battered by devastating winter storms. Her roof had fallen apart and pieces had actually fallen off, leaving the home without a roof in some places.

RELATED: Woman Sees Elderly Passenger Get off the Bus – Immediately Takes a Photo When the Driver Follows Her Out for This Reason

Water damage and insulation was visible even from the outside of the house, and the conditions inside were even worse. There was damage to the floors and walls in every room of the house, leaving Graham, who is wheelchair-bound, freezing and damp.

“The wind was real strong and the rain came pouring down. I was just cold all night,” Pearl said.

When Zimmerman walked by the house it was December. She knew that the worst of the winter was yet to come -– they had to get Pearl out immediately.

“If Pearl was there another day, she may not have made it. When we found out that Pearl was in there, we said we were going to go in and get her out,” Kelly said.

How a Community Came Together to Help a Vulnerable Elderly Woman

Zimmerman got the community together and raised money to get Pearl into a hotel for the short term. Then, the real work began.

Neighbors worked to find Pearl an Americans with Disabilities Act-compliant apartment, and they successfully found her an affordable unit. They helped her move in, furnish and decorate her comfortable new home.

Many of her neighbors bought tulip-inspired decor, paying homage to her beautiful springtime garden. Pearl couldn’t believe her luck, but it didn’t end there. More people showed up, this time with fresh and frozen homemade food.

RELATED: Elderly Man Rings Stranger’s Doorbell and Gives Her an Envelope – What She Finds Inside Causes Her to Break Down

They had only found old hot dogs and bread in her refrigerator when they moved her out, so they wanted to make sure she was eating properly and getting nutritious food. More items are on their way from neighbors, including tulip bulbs.

Pearl is excited to plant a tulip garden in front of her new home. She was so inspired by the kindness of those around her.

“It’s the best thing that’s ever happened in my whole life, to have so many people help me like they have,” Pearl said.

However, not all seniors are so lucky. We hope this story serves as a reminder to check in on the vulnerable populations in your community. You never know what people are going through and how you can help out.

Elderly Man Responsible for His Entire Family Gives Up His Home – So Strangers Raise Almost $40,000 for Him