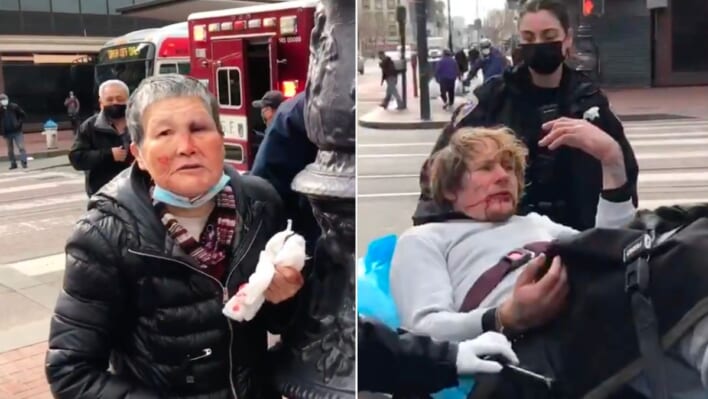 A GoFundMe raised nearly $1 million to help the elderly victim.

An elderly woman was attacked by a seemingly racist assailant in San Francisco and fought back with plenty of courage.

The 76-year-old Xiao Zhen Xie was the victim of an unprovoked attack and she immediately retaliated with force — a blunt wooden board.

How An Elderly Woman Put Her Attacker Onto A Stretcher

According to reports, Xie was standing at a traffic light on Market Street in the Lower Haight district at about 10:30 am when a man approached her and punched her in the left eye, without reason.

Despite being attacked, Xie immediately fought back by picking up a nearby wooden board and striking her assailant.

Her attacker, later identified as 39-year-old Stephen Jenkins, was taken to the hospital to deal with injuries, before later being arrested by San Francisco police.

While speaking to reports, Xie — who had her daughter Dong-Mei Li as a translator — said she was “very traumatized, very scared” and had bad bruises and a very swollen right eye.

After the attack, Xie’s grandson, John Chen, set up a GoFundMe page to help the 76-year-old grandmother pay for medical bills.

“I am amazed by her bravery,” Chen wrote. “She was the one that defended herself from this unprovoked attack.”

Chen said she suffered from two “serious black eyes,” and a swollen wrist. More importantly, he says she was “severely affected mentally, physically, and emotionally.” He noted that Xie became too afraid to step out of her home and was suffering from PTSD.

The grandson said his mother is a cancer survivor and has also survived diabetes a decade prior — a testament to her strength. Funds from the campaign helped to pay for her medical expenses, therapy treatments, and other bills.

An Incredible Response to a Tragic Trend

“My heart is with all the other elderly Asians that have also been seriously injured or killed in this wave of attacks towards the Asian community,” he wrote. “We want to thank everyone that is donating and that has shown my family massive support through this very traumatic event.”

In an update on the GoFundMe page, Chen said that his grandmother used roughly $100,000 on medical expenses and bills and donated the rest of the donations to a newly formed charity that helps protect the Asian and other minority communities.

Let that be a lesson for all the delinquents out there — you never know who you’re messing with.