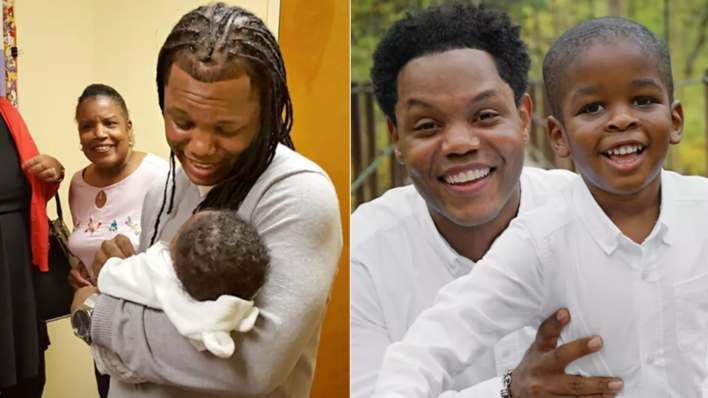 Adopting a child is not easy. Especially if you’re single and gay. But the stars aligned for Baltimore’s David Marshall who’s now using social media to help other parenting hopefuls.
By Ty Jay    September 28, 2022

Adopting a child is not easy. Especially if you’re single and gay. But the stars aligned for Baltimore’s David Marshall who’s now using social media to help other parenting hopefuls.

Adopting a child is a long, tedious, and difficult process. Which might have seemed nearly impossible for a gay and single Black man.

However, David Marshall has overcome the odds and is now using his remarkable journey to help other hopeful parents do the same.

In 2017, Baltimore’s David Marshall adopted his son Josiah, who was just two weeks old. At the time, the newfound father had no idea what type of impact he was going to make.

In November 2020, Marshall hosted a Facebook Live broadcast for his friends on social media and retold the story of how he adopted the young Josiah. The response he received gave him an idea to help other couples, families, and single people who were in similar situations.

While speaking with CBS Baltimore, Marshall said people listening to his Facebook Live were “just mind blown” after hearing his story.

Marshall says the feedback was resoundingly positive and he wanted to show the world that adopting a child as a single gay man wasn’t as impossible as it seemed. As a result, he created the non-profit organization “Journey to Josiah” to help others.

Marshall began cataloguing all of the resources and agencies he used in his own adopting journey and started putting together a guide for other prospective parents.

On the “Journey to Josiah” website, the organization’s vision says is to “increase the rates of adoptions and fostering of children around the world.” Marshall says his non-profit has “a mission focused on education and outreach” and that the “Journey to Josiah’s” content will help to “increase the likelihood of connecting children with deserving adults to create strong bonds and loving families.”

On Marshall’s social media channels, he uploads everything from advice guides, motivational quotes, tips on how to select the right adoption agency, how to become a foster parent, and much more.

Whereas “Journey to Josiah’s” main focus is helping any qualified person find a child to adopt, the non-profit organization is geared especially toward helping Black, queer, and single people become adoptive parents. The group says societal barriers and discriminatory legislation are the toughest hurdles for said groups trying to become parents.

Marshall says there is “still a lot of discrimination” against gay families and that “there are some places still where they prefer married couples to single individuals, so I want to be that person who is beginning to break those barriers.”

Through its consulting services, “Journey to Josiah” says it helps prospective adoptive parents all along the way. “You have questions, we have answers,” says the organization’s mission statement “Let’s get you started the right way today!”

Marshall told a local Baltimore news station that he does personally intend to adopt a child again, this time a daughter.

Single Dad Gets Shamed For Hugging Gay Son, Reddit Has The Best Response