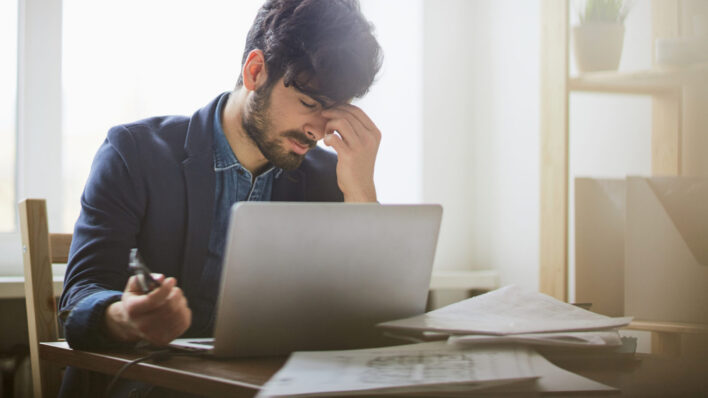 Have you ever met someone who seemed to love the grind a little too much? Maybe you? Years ago, I
By Matt Valentine    October 23, 2017

Have you ever met someone who seemed to love the grind a little too much?

Years ago, I worked in an office selling insurance and investments (it was more fun than it sounds). The culture was one of self-improvement, making it big (we were sales people), and persevering through the grind to get to success.

The problem is, over time, some of us became almost infatuated with the grind itself. It made us feel good because we knew we were working harder than everyone else. While some people were taking time off, sitting on their couch, or going out for the weekend we had goals and a dream and we were working towards them.

We never realized that we had built a cage around of ourselves that would be hard to get out it. Why Falling in Love with the Grind Can Kill Your Progress

So, why is this a problem? Why was it so bad that we had fallen in love with the grind?

One reason: Because it became our identity.

Many of us had been there in that office for years and gone through a lot just to stick it out, seeing examples of people who had perfected their system and really made what we considered at the time to be a lot of money and had a seemingly great life.

And over that time, that struggle literally became a part of our identity. Working hard is important, but seeing yourself as someone who is always struggling is highly damaging. They’re two different things which are not to be confused.

If this becomes a part of your identity you’ll never get out of the situation you’re in now and move on to something better. And I’m a testament to the fact that there is something better beyond the struggle.

Life never stops challenging you, and sometimes things happen that can throw our entire world upside down, but letting the act of struggling to accomplish something become a part of our identity is something else entirely. When that happens, we’ve built a cage around ourselves that is hard to get out of.

Since that time, I’ve become more aware of what happened then and what really helped me grow beyond it. I’ve found there are three important steps.

First, it’s critical you start tracking your progress. Many of us set goals…but very few of us actually track our progress towards those goals.

What typically happens is we set a goal, are excited for a while, can’t keep the excitement up, don’t accomplish the goal, and then altogether forget about it and set a new goal. Once that new goal is set we block the previous one out of our mind. This is especially dangerous when you don’t track your progress because it can skew your perception of your own progress in a more favorable light than it may deserve.

By tracking and assessing your progress as you go, you’ll remember everything you’ve done up until then, see how much progress you’ve made (if any), and be able to then course-correct to fix the situation or simply state on course if you’re doing great. The point is you want to make sure you’re always making real progress, that way you’re never stuck.

2. Create an image of yourself

Next comes the important part. The entire reason falling in love with the struggle is dangerous is because it becomes a part of our identity. But if you can change your identity to one of someone that is beyond the struggle, who grinds but doesn’t become attached to the hard times connected to it, and who makes real progress than you’ll break free from this crisis of identity to a better place.

So, take some time to map out a new identity for yourself. Think of what you really want to do with your life, who you want to be, and what you’d like to accomplish before you die. Don’t limit yourself and really allow yourself to think openly.

3. Become the image (mimic the conditions)

Raising your identity level takes time and definitely isn’t an overnight thing, but there’s something you can do to help the process along: mimic the conditions of your new identity goal. By doing so, you’ll accelerate the process and help yourself break out of the old identity you’ve created for yourself. This isn’t hokey advice, I’m referring to taking real steps to craft your life in the image of this bigger, more developed, and more successful image.

Back at the old insurance and investment office I used to work at, I remember hearing a story about one of the most successful producers the company had ever seen, someone I really looked up to at the time.

I was purchasing office space in a building we shared and the office secretary was telling me about how when he purchased his first office he had nothing but a desk and a phone inside of it. The guy didn’t even have very many sales coming in regularly yet to justify the office, but he didn’t see himself as the person he was at the time– he saw himself as something bigger. He knew where he was going. He had set his identity goal and was now doing things that befit someone at that level. And that’s the same thing you need to do.

How that’s done is for you to decide, but the process of brainstorming ideas is simple. Ask yourself this question: What will my life look like and what will I be doing when I hit this ultimate goal?

This could be something simple like purchasing a domain name, reading a book, calling someone; or it could be something larger like buying supplies or something to perform a task, going back to school, or leasing office space like in my example. Whatever that is for you, take steps to becoming the image you’ve created for yourself to move the process forward.

It’s easy to fall in love with the grind because working hard– harder than you ever have– is essential to realizing your dreams of success, but the struggle doesn’t have to be. Use a better system for assessing your progress, create a bigger identity, and take steps to realize that identity and you’ll find yourself breaking through your old identity to make real progress like never before.