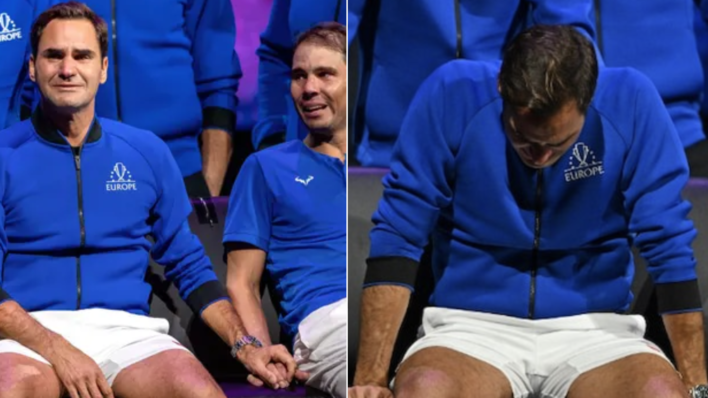 Federer and Nadal, two rivals, are re-defining masculinity at the end of Roger’s career.
By Lindsey Staub    September 27, 2022

Federer and Nadal, two rivals, are re-defining masculinity at the end of Roger’s career.

After more than a decade of fierce competition, this rivalry finished in respect.

Tennis legend Roger Federer retired from the sport this month after competing in the Laver Cup. Even during his last time the court professionally, he and his long-time rival, Rafael Nadal, managed to change the game.

The Two Rivals Had Unimaginable Skill

Federer is walking away from his career with 20 Grand Slam single titles and Nadal surpasses him just barely with 22.

“On court, we have completely opposite styles, and that’s what probably makes our matches and our rivalry probably one of the biggest and most interesting,” Nadal said. “But in the family life, personal life, probably we approach life not in a very different way. That’s why we can trust each other, we can speak very often, and we’re able to speak very feeling free, feeling confident.”

Ever since Nadal entered the scene at the ATP Tour in 2004, Federer and Nadal were interlocked in a rivalry that came to define both of their careers.

“We started when I arrived on the tour, and when I started to be a better player, then Roger was always there in front of me,” Nadal said. “For me, [he] was always the guy to beat.”

Nadal, who has spent his entire professional career rivaling Federer, can’t imagine playing with Federer no longer in the game.

“When Roger leaves the tour, an important part of my life is leaving too, because all the moments that he has been next to or in front of me are important moments of my life,” Nadal said.

Tears Were Shed on a Momentous Day

At the O2 Arena on Sept. 23, a retirement ceremony was held for Federer just after a neck-in-neck doubles game against Jack Sock and Frances Tiafoe which ended in a loss for Federer and his teammate.

But it wasn’t the loss that caused a flare in emotions that night, it was the camaraderie between Federer and Nadal as Federer played his last game.

“[It has] been a difficult day to handle every single thing, and at the end everything become super emotional,” Nadal said.

RELATED: Serena Williams On The Importance of Believing In Yourself

Nadal was seen in tears saying goodbye to his long-time competitor. Despite being opponents on the court, the two had an incredible camaraderie off of it.

“Having somebody like Roger that I feel confident to talk about any personal thing, it’s something that it’s very beautiful after all the things that we shared together and all the important things that we fighted for such a long time,” Nadal said.

The Most Supportive Competitors

No matter who won or lost, Federer and Nadal continued to support each other.

The two competed 40 times, 25 of which occurred in tournament finals.

“I’m very proud to be part of his career in some way,” Nadal said. “But even for me happier to finish our career like friends after everything we shared on court like rivals.”

Even though some may expect the two to be bitter on and off the court, both Federer and Nadal continuously displayed good sportsmanship. Just one example of the humane moments between the two occurred in 2009 in Melbourne, Nadal consoled a crying Federer after Federer defeated Nadal in the finals.

The End of an Era

This on-court opposition and off-court camaraderie will affect sports for years to come. The respect between some of the greatest tennis competitors of our time shows the incredible importance of sportsmanship and how great contenders can still shake hands once the competitions is over.

If these two can give such public love to each other, there’s hope for all of our conflicts and rivalries too.