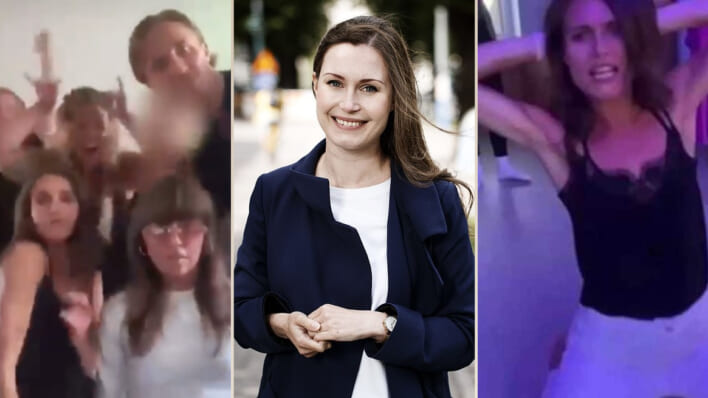 In a world where male leaders have become tyrants or have made the worst decisions for their countries, Finland’s Prime Minister, Sanna Marin, is being crucified for partying.
By Flavia Medrut    September 13, 2022

In a world where male leaders have become tyrants or have made the worst decisions for their countries, Finland’s Prime Minister, Sanna Marin, is being crucified for partying.

Ever since she obtained her position of power in December 2019, Sanna Marin has been a rising star on Finland’s political scene. At the age of 34, she became the world’s youngest prime minister. While she proved that she is very good at what she’s doing, she’s still a target for criticism because… she likes to party. But don’t we all?

RELATED: 128 Leadership Quotes to Inspire You to Become a Better Leader

Just to be clear, Ms Marin hasn’t been caught doing something out of the ordinary. She parties like any other person of her age. Besides, she made no secret of her social life, as she was often photographed at music festivals. But since she occupies a leadership position, many think that her behavior should be impeccable and partying is off the table.

We all know that behind the scenes everyone has a normal life, but it’s like we can’t accept that these people are human too and they have the same needs. However, it seems that male leaders are allowed a certain dose of “unacceptable” behavior. If we’re being totally honest, we’ve seen some men doing worse things than partying. But when it comes to women, criticism reaches new levels of ridicule.

It’s been more than two years since the Finnish PM has been a target of criticism because she loves partying. However, after a video of her dancing, singing and drinking became viral on social media, some people began saying that he is behaving inappropriately for a prime minister. It was also rumored that she might’ve been under the influence of drugs.

RELATED: Appalled Dad Stands Up For 8-Year-Old Given Sexist Assignment By Teacher

Riikka Purra, an opposition party leader, called for Marin to take a voluntary drug test. Purra feared that Marin’s inappropriate behavior could affect her decision making in the event of a sudden crisis.

Marin has denied taking drugs, saying that she only drank alcohol and partied “in a boisterous way”. However, in order to avoid any further discussions on the matter and to “clear up any doubts”, the Finnish Prime Minister agreed to take the drug test.

Sanna Marin Through the Ranks

Dubbed as “the coolest prime minister in the world”, Ms. Marin comes from a modest background. Her parents separated when she was very young, so her mother mostly raised her alone.

Before entering the world of politics, Sanna used to work at a local bakery as a cashier. However, she went into politics at the age of 20 and after only two years, she was running for a council seat in Tampere. She wasn’t elected at first, but on her second attempt she had not only won the council seat, but also became the council leader.

Marin rose quickly through the ranks of the Social Democratic Party, as a left-winger and a strong advocate of Finland’s welfare state. At 34 she became the world’s youngest serving prime minister, leading a ground-breaking centre-left coalition, which included four other young female politicians.

Sanna Marin Is Defending Herself

Commenting on the viral video of her having a good time, she said that she knew she was being filmed. The only thing that disappointed her was that the video was released to the public. “I danced, sang, and partied – perfectly legal things. And I’ve never been in a situation where I’ve seen or known of others [using drugs],” she added.

After being advised that it would be wise to take a drug test, Ms Marin was immediately open to the suggestion, telling the reporters that she’s not used any drugs and she is ready to take that test right away.

She later explained that she has a family and a work life, and barely any time to spend with her friends. Marin doesn’t consider her behavior inappropriate so she doesn’t plan on changing it.

“I am going to be exactly the same person as I have been until now and I hope that it will be accepted.”

As citizens, we expect nothing but impeccable behavior from our leaders. We expect them to be wise and always make the right decisions for our countries. And there’s nothing wrong with that. What is indeed problematic is that we sometimes forget that they are human as well.

RELATED: Why We Really Need To Talk About Simone Biles’ Shocking Olympic Exit

While they try to be at their best behavior in the public eye, they live a normal life when the cameras are off. They’re going to have arguments with their partners, daily struggles and medical conditions, just like the rest of us. And just like the rest of us, they’ll feel the need to party every now and then. As long as they don’t do anything outrageous, there’s nothing wrong with having a good time with some close friends.

When it comes to Ms. Marin, some people think that it’s normal for a woman her age to have a little fun, but then there were the ones who were completely shocked by the news. These are probably the same people who would crucify a woman of her rank for wearing a swimsuit at the beach.

A Leader’s Right to Party

We have to understand that regardless of rank or gender, people are entitled to live their lives just as much as we are entitled to live ours. Some of them are being more discreet about what they do in their private time, but that doesn’t mean they’re not dancing or having a few drinks on occasions.

RELATED: What Donald Glover and Atlanta Teaches Us About Being Your Own Biggest Cheerleader

Whether we’re talking about Sanna Marin or anyone else in a position of power, we should first look at their accomplishments and their commitment to doing what’s right for their people. And Ms. Marin seems to be very good at her job.

A little party didn’t hurt anyone. As long as what leaders do in their private lives doesn’t affect their decision making or leadership skills, there’s really no reason to make such big fuss out of it.