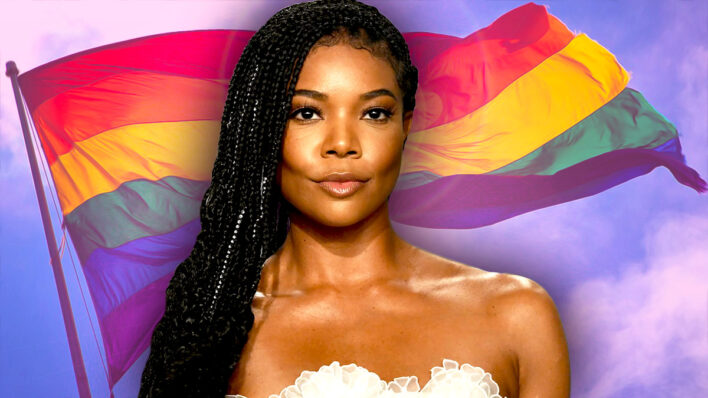 Cheaper by the Dozen star Gabrielle Union had some harsh words for Disney’s complacent response on Florida’s “Don’t Say Gay” bill. The conversation that followed continues to be of vital importance.
By Maya Khamala    April 12, 2022

Cheaper by the Dozen star Gabrielle Union had some harsh words for Disney’s complacent response on Florida’s “Don’t Say Gay” bill. The conversation that followed continues to be of vital importance.

Romcom star Gabrielle Union recently made global headlines for criticizing Disney’s blasé response to Florida’s “Don’t Say Gay” bill. It might have had a little to do with the fact that she did it while walking the red carpet at the Los Angeles premiere of Disney’s Cheaper by the Dozen, in which she stars alongside Zach Braff.

While Union didn’t name Disney specifically, she did tell reporters she was upset about how most corporations failed to push back against Florida’s controversial “Don’t Say Gay” bill, formally known as the “Parental Rights in Education” bill, designed to restrict how gender identity and sexuality are discussed in public schools.

Opponents of the bill in Florida and beyond argue that it will silence vulnerable LGBT+ students and harm their personal development while violating educators’ freedom of speech and First Amendment rights. Thousands of high school students staged walkouts in protest, and a large demonstration was held outside the state Capitol building as legislators debated the bill.

What Is Florida’s “Don’t Say Gay” Bill: A Brief Timeline

On March 28, Florida Governor Ron DeSantis signed the controversial bill into law, which effectively restricts schools in the state from teaching students about sexual orientation and gender issues. Teachers who don’t comply open themselves up to lawsuits.

The legislation states that, “classroom instruction by school personnel or third parties on sexual orientation or gender identity may not occur in kindergarten through [third grade]” or “in a manner that is not age appropriate or developmentally appropriate for students in accordance with state standards” in other grades. Furthermore, it explicitly states that parents “may bring an action against a school district to obtain a declaratory judgement” and a court may award damages and attorney’s fees if it finds that a school violated the measure.

RELATED: Inspirational Quotes from Walt Disney About Life and Following Your Dreams

A Republican amendment to the bill proposed that schools be required to disclose whether a child is LGBTQ+ to their parents within six weeks of learning that they are not straight, but it was withdrawn before the bill reached the House.

On March 31st, three days after it was passed into law, LGBTQ+ advocacy organizations filed a lawsuit against DeSantis and the state’s education officials to block its enforcement.

The Walt Disney Company, which happens to be a major political force in the state of Florida, has faced growing calls to condemn the bill, and not just by Gabrielle Union. Many people feel its response has been lackluster at best, especially given that several Disney entities have donated tens of thousands of dollars to Florida legislators who supported the bill.

In a staff memo on March 7th, Disney CEO Bob Chapek said, “corporate statements do very little to change outcomes or minds,” and are instead, “often weaponized by one side or the other to further divide and inflame.” He said the company’s films and programs “are more powerful than any tweet or lobbying effort.”

RELATED: Bob Dylan’s Hurricane: How The Legendary Star Risked It All To Stand Up For What’s Right

During a shareholders meeting on March 9th, Chapek changed his tune, saying that the company was “opposed to the bill from the outset,” and that he talked with Governor DeSantis “to express our disappointment and concern that if legislation becomes law, it could be used to unfairly target gay lesbian, nonbinary and transgender kids and families.”

Disney’s LGBT+ employees and staff opposed to the bill have been staging daily walkouts in an effort to compel Disney (which identifies as an LGBTQ+-friendly workplace) to “protect employees and their families in the face of such open and unapologetic bigotry,” as well as to pressure Disney to cease all campaign donations to state officials who helped pass the bill. Protesting employees have also demanded that Disney leadership publicly commit to an action plan that protects employees from anti-LGBTQ+ legislation.

On March 11, Chapek announced that Disney would “immediately” begin supporting efforts to combat similar legislation in other states and will pause “all political donations” in the state pending a review of the company’s political giving, conceding that the company failed to “be a stronger ally in the fight for equal rights.”

More recently, after the bill had already passed, and following weeks of protests, Chapek says he spoke with Governor DeSantis and has asked for a meeting with his office and LGBTQ+ staff from Disney.

In hearing this latest news, Benjamin Siemon, an LGBTQ animation writer at Disney, tweeted, “We’ve heard apologies which is important but as Disney employees we have not heard any specific policies that help alleviate our worries that the company is just temporarily placating its LGBTQ+ employees & only pausing political donations until the media stops paying attention.”

Disney, Hollywood and the Importance of Celebs Speaking Truth to Power

Union, whose stepdaughter Zaya Wade identifies as transgender, has zero regrets about the comments she made on the red carpet and has since held her ground. As a recent guest on the “Keep It” podcast, she said she wasn’t concerned about retaliation from Disney.

“I was very clear about my thoughts about Disney funding hate and oppression…” she said. “I don’t know if they might murder off my character on Cheaper by the Dozen … Luckily, there’s enough other companies willing to hire me, knowing that I tell the truth, and I will not be held back by fear [of taking] my career away. I’m Black in Hollywood. What does that even mean?”

RELATED: Spider-Man’s Andrew Garfield Is an Empathetic Lover – And Can Teach Us a Lot about Intimacy

In spite of the powerful protests organized by employees and staff, it tends to be extra mobilizing when celebrities and other well-known public figures speak up. Union understands this better than anyone and should be commended for her fierce stance. But she is not the only one using her wide-reaching powers for good.

Demanding that Disney do better, celebrities like Star Trek actor George Takei, who has a lengthy relationship with Disney, tweeted, “Today I support Disney employees walking out in solidarity for human rights, including those of our #LGBTQ+ loved ones. We must make schools and workplaces safe for all marginalized communities.” Takei has been vocal in his opposition of the bill beyond Disney’s involvement as well.

Award-winning actress and LGBTQ+ advocate Kerry Washington — also a longtime employee of Disney — shared a statement on social media, talking about how while she considers Disney “family,” families sometimes disagree. She adds, “I don’t condone the actions or inactions of Disney in this moment. I wholeheartedly support the LGBTQIA+ employees, and stand with them in this walk out today. Please know that you matter. Your rights matter. Your voices matter. I encourage you all to help their voices ring louder today.”

She also urged her following to sign the petition asking Disney to “immediately and indefinitely cease all campaign donations to… politicians involved in the creation or passage of the ‘don’t say gay’ bill.”

The more commonplace it becomes for celebrities to speak out about oppressive government policies — regardless of the repercussions they may face — the better off we all may be. And if you’re sitting there shaking your head at the idea that a celebrity would ever face repercussions, let’s not forget The Mandolorian’s Gina Carano, who posted a series of controversial tweets in which she mocked mask-wearing, suggested voter fraud occurred during the 2020 election, and shared posts that some viewed as transphobic. Disney chose to fire her. Ultimately, the risk is just as real for anyone, regardless of their views.

Ever since the “Don’t Say Gay” bill reared its head, conservative states across the US have been proposing similar bills in an attempt to ban any discussion of gender identity and sexual orientation at school. According to a February report by Pen America, over 156 anti-LGBTQ+ bills have been introduced or refiled in 39 states since January 2021. Sixty-two of these include mandatory punishments for those found in violation.

But as always, those bearing the brunt of policy decisions like this one are the kids in the classroom. A 2021 report by LGBTQ+ suicide prevention and crisis intervention group The Trevor Project found that LGBTQ+ young people who learned about LGBTQ+ people or issues in school were 23% less likely to report a suicide attempt within the last year.

Gabrielle Union has words of encouragement for anyone feeling under attack by these restrictive laws: “There are people just like you that want you to win in life. And by win, I mean to survive and thrive. And we will find a way.”