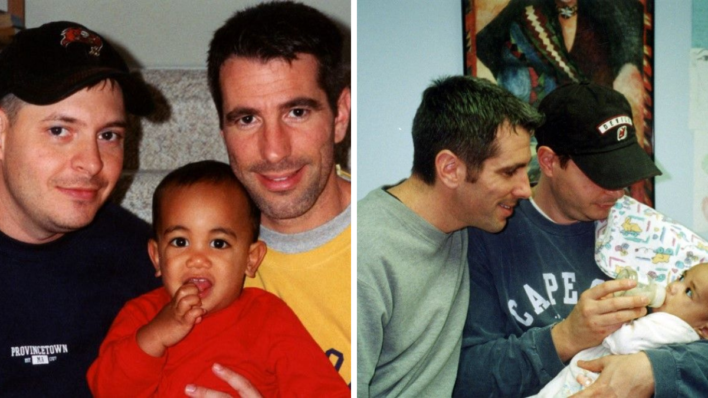 Danny Stewart and Pete Mercurio didn’t plan on being parents until a baby arrived in their life in the most unexpected
By Joel Balsam    April 8, 2021

Danny Stewart and Pete Mercurio didn’t plan on being parents until a baby arrived in their life in the most unexpected way.

Danny Stewart was in the New York subway rushing to meet his partner for dinner when he noticed something strange beneath the stairwell.

“I noticed on the floor tucked up against the wall, what I thought was a baby doll,” he told the BBC. “I glanced back one more time, and that’s when I noticed his legs moved.”

As it turned out, what he was a real-life baby boy.

“He didn’t have any clothes on, he was just wrapped up in this sweatshirt. His umbilical cord was still partially intact, so I could tell he was a newborn. I was thinking maybe a day or so old,” Stewart added.

Who will adopt this baby?

Stewart tried to ask for help, but people wouldn’t believe him. Since this happened in 2000, not everyone had cell phones, so Stewart had to use a payphone to call 911.

By the time police finally arrived to take the baby to safety, Stewart’s partner Pete Mercurio had joined him.

“I remember turning to Danny and saying to him on the sidewalk as the police car was driving away, ‘You know, you’re going to be connected to that baby in some way for the rest of your life,'” Mercurio told BBC.

The story made headlines and Stewart soon found himself in court about the baby’s future. The judge said: “‘Mr. Stewart, I want to let you know what’s happening here, in instances where we have a baby that has been abandoned, we want to place them in pre-adoptive foster care as quickly as possible,'” Stewart recalled. “In my head, I’m thinking, ‘Well that makes sense.'”

“And then the next thing out of her mouth was, ‘Would you be interested in adopting this baby?'”

Stewart thought about it for a second and quickly followed his gut.

“I think most of the mouths dropped in the courtroom, including mine. I said, ‘Yes, but I don’t think it’s that easy,’ and the judge smiled and she said, ‘Well, it can be.'”

Stewart and Mercurio had not considered adopting before they discovered the baby was discovered in the subway and got into an argument about whether they should keep it.

“We had no money, we had no space, we still had a roommate,” Mercurio said. “I was also a little angry with him, ‘How could you say yes, without consulting me first?'”

Stewart said he planned to keep the baby whether Mercurio liked it or not, but once they met the baby again they both were convinced.

“The baby squeezed my finger with his entire hand so hard,” Pete told the BBC. “He was just staring up at me and I was just looking at him, and it was almost like he found a pressure point in my finger that just opened up my heart to my head and showed me in that moment that I could be one of his parents, one of his dads.”

After going through parental training and a long adoption process, Stewart and Mercurio managed to adopt the baby, who they named Kevin.

While they’d been a de facto family for a decade, Stewart and Mercurio got legally married in 2011, and as per Kevin’s suggestion, they had the judge who granted their adoption officiate the marriage.

Now, Kevin is a “respectful,” “empathetic and kind” 20-year-old, and his dads couldn’t be happier.

Mercurio recently wrote a children’s book called “Our Subway Baby” and Stewart can’t imagine life not as a parent.

“My life has become much more enriched and full. It has changed my world view, my perspective, my whole lens,” he said. “I did not know that this level of deep love existed in the world until my son came into my life,” he added.

Stewart and Mercurio were a couple of 30-somethings loving life in the big city, then all of a sudden everything changed. And while they didn’t plan for a baby to come into their lives in that way — who could!? – they made the best of it and have no regrets.

While we can do our best to plan out our lives, we really have no idea what the future will bring — and that’s a beautiful thing about life.