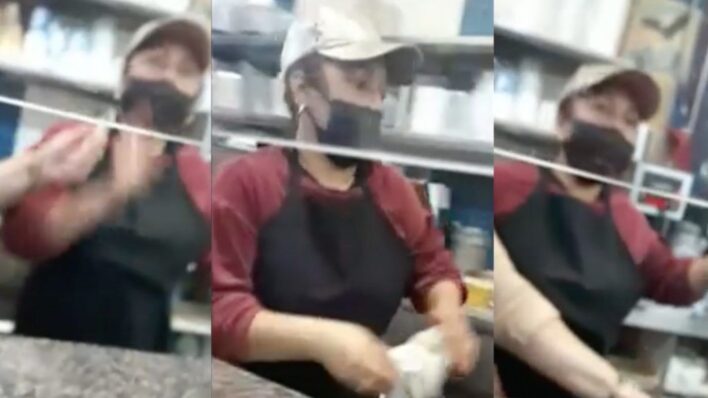 Gay Couple Gets Kicked Out Of Restaurant, Manager Has The Best Response

Simply holding hands was enough to get a married gay couple kicked out of a Bronx restaurant simply for embracing
By Joel Balsam    January 27, 2021

Simply holding hands was enough to get a married gay couple kicked out of a Bronx restaurant simply for embracing in public. But the restaurant has since apologized and fired the worker who made the discriminatory remarks.

An affront against love

Nelson Ayala and Jamel Brown Jr. just wanted some food from La Isla Cuchifrito Restaurant in Mott Haven, New York. But when they went to order, a cook made gestures criticizing the two men, who are married, for showing a public display of affection.

In a video recorded by the couple, the woman is seen saying “man” and “woman” in Spanish, implying that their love is wrong.

According to the couple, the woman wanted them kicked out, so they canceled their order and left to call the police.

“Now that we have to go somewhere and be kicked out because of our sexual preference is just mind-blowing,” said Brown Jr. to News 12.

“Who I love shouldn’t define where I shop or eat at. I came here to get service, not to get judged.”

A manager at La Isla Cuchifrito has since apologized to the couple.

“We don’t condone what happened in this restaurant, we’ve been here like I said for 15 years, we have never had a problem in this community,” said Elizabeth Ocasio, manager at La Isla Cuchifrito, to News 12.

“This one employee we didn’t know her behavior, we didn’t know that she’d act this way, as soon as we found out what happened, we terminated her,” Ocasio added.

The couple protested outside the restaurant

To further amplify how unjustly they were treated, the couple held a rally outside the restaurant. While there, the couple was offered a free meal but declined.

“What is a free meal going to do? We are not hungry,” said Brown Jr. “We want them to know that they just have to train their employees more. Have them treat people with respect just like they would want to be treated with respect behind the counter.”

Ocasio continued to try to make amends, inviting the couple to come back so that she can apologize to their face.

“I apologize to anyone that felt offended, that felt any kind of way,” Ocasio said. “That’s not us, it was only one person, one employee and she’s not here no more.”

Yes, this story shows much more work needs to be done to eliminate discrimination. But it’s also positive news, considering how quickly justice was served against the employee.

The fight for equality in love, sex, race, and gender is far from over, and it’s important for all of us to call out discrimination when we see it.