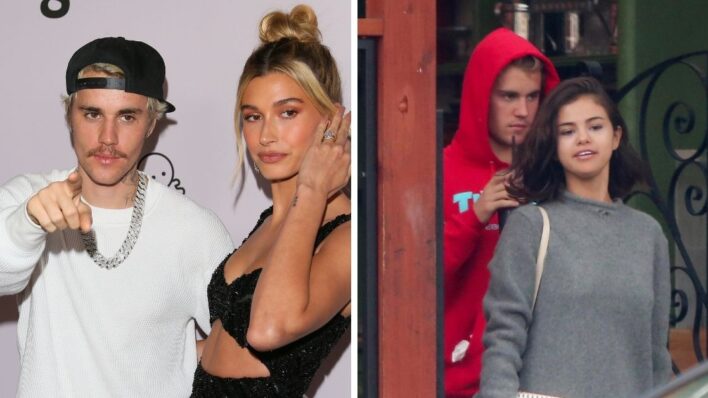 When Hailey Baldwin married Justin Bieber, the world inevitably tried to pit her against his ex-girlfriend, Selena Gomez. This is how Hailey dealt with it.
By Maya Khamala    October 14, 2020

When Hailey Baldwin married Justin Bieber, the world inevitably tried to pit her against his ex-girlfriend, Selena Gomez. This is how Hailey dealt with it.

Hailey Baldwin, daughter of movie star Stephen Baldwin, is most known for her modeling work and for her presence as TV personality closely linked to the Kardashian and Jenner families. Although born into the famous Baldwin family legacy, Hailey has made a point of distancing herself from her father and uncle’s names in favor of accomplishing things on her own.

Nonetheless, it was her father who introduced Hailey to Justin Bieber back in 2009 when he took her backstage at the Today Show. Little did he know at the time that he was introducing his future son-in-law to his teen daughter. Even then, in addition to being a fan of Bieber’s music, she had a huge crush on him.

Fast forward to 2018, and Hailey married Justin at an NYC courthouse. They didn’t tell anyone before they did it. A year later, they followed this up with a second, traditional ceremony in front of loved ones and celebrity guests. But although the stars may have ultimately aligned for Justin and Hailey, getting there was anything but a straight path!

Hailey Baldwin was in a love triangle from the start

Though she never would have chosen it, Hailey has been ensnared in a love triangle with Justin and his ex-girlfriend Selena Gomez for many years. While Selena and Justin dated on and off from 2010 to 2018, it was Hailey (who dated Justin in his off period from Selena in 2015), who ended up marrying him.

But what about that in-between period—the prolonged period before they announced they were getting back together, when Justin was back with Selena while still friends with Hailey? How did Baldwin actually deal with being one side of a well-traveled triangle?

From the start, fans were fully obsessed with Justin and Selena’s relationship status, which can’t have made his high profile to-and-fro between Hailey and Selena any easier on her. And, predictably, fans are still picking sides in a dramatically fabricated feud which pits one woman against the other. Although both women met Bieber in their teens, it was Gomez who dated him first, therefore legitimizing her as the official girlfriend—by the time Baldwin came into the picture, celeb media were primed to dub her “the other woman.”

Did Justin only marry Hailey to get back at Selena?

In fact, the attacks on Hailey had become so extreme that Justin had to intervene. After receiving countless hateful messages from Selena fans, Justin reached his limit when one particular comment insinuated that he had only married Hailey to get back at his ex.

The particular comment said: “You are NOT in love with Hailey! You only married her to get back at SG [Selena Gomez].”

Justin wrote an entire paragraph responding to the comment, clarifying things for good. In it, he reaffirmed his love for his wife and his good feelings for his ex.

I absolutely loved and love Selena; she will always hold a place in my heart, but I am head over heels in love with my wife and she is absolutely the BEST THING that has ever happened to me period.

But how did Hailey deal with all of it?

Dealing with romance and the emotions that go with it when you’re still in your teens—which was true of all three stars at some point in the parameters of our love story—is hard enough. Add the fame factor and you get everyone watching and commenting on your every move. That combination can’t be easy on anyone’s romantic relationships or their general mindset.

In 2018, one fan posted on Instagram, calling Hailey a “hoe,” “pathetic,” and “sad” after she spotted her hanging out with Justin at a Los Angeles church. Somehow finding the now-deleted post, Hailey took the high road, responding, “So interesting to leave a church service and speak this way about someone. Anyways, hope you enjoyed the service and were able to get something out of it!! God bless :)” Way to kill ‘em with kindness, Hailey.

Seeing Justin rekindle his romance with Selena in 2016 was not easy for Hailey either, but she has time and again coped with genuine style and class. Earlier this year during an episode of their Facebook show, “The Biebers on Watch,” Baldwin openly discussed her period of recovery during that time with her husband himself as the couple chat on a lake by their house.

In response to Justin asking her how she forgave him and learned to trust him enough to get married after their abrupt split in 2016, she said, “I think that one thing that’s really important is that from the time that you and I weren’t — ended, and it was not on good terms, I was on my own, essentially,” Hailey responded.

During a 2019 interview, Hailey described how she “really let myself feel the emotions that I was feeling” as she recalled grieving her breakup with Justin.

Even though Hailey has said that she was certain about her feelings toward Bieber, even after their split, she experienced doubt and confusion when he started back up with Gomez. It was through their mutual friends that Baldwin learned of Bieber doing a lot of important work on himself during this time. Bieber has pointed out that both he and Baldwin had to be forgiving when they finally revisited their relationship.

When faced with rumors that there is a feud between her and Selena, Hailey has insisted this is not the case. She has consistently shown quiet but public support for Selena Gomez by liking her Instagram posts. In fact, she wants people to know that she’s a genuine fan. Similarly, she also isn’t upset about Selena’s breakup song, “Lose You to Love Me,” in which she seems to refer to Justin moving on to Hailey too fast.

According to a source from US Weekly, “Hailey thinks Selena is talented. By liking photos of Selena, whether it be a glam shot or ones that her friends post on Instagram, Hailey wants to show that there are no hard feelings. It’s her way of trying to make peace and show her support for Selena in a low key way, yet public way.”

While Hailey has admitted how difficult her split from Justin was at the time, she has since called it “the best thing” that they both decided to focus on themselves. Ultimately, it seems the two young stars needed those two years apart in order to come together stronger, having both matured a lot in their time apart.

She had to get to know herself outside of her relationship with Justin and he had to get closure from his past with Selena. As for the “love triangle,” these days, all three young stars are doing great. Selena has since dated other guys, including a 2017 relationship with The Weeknd, and just last year she released a critically acclaimed album.

Meanwhile, Hailey and Justin are happily married and going strong while also focused on growing their careers.
The moral of the story? Drama and haters aside, love always wins—if you’re willing to do the self-work.