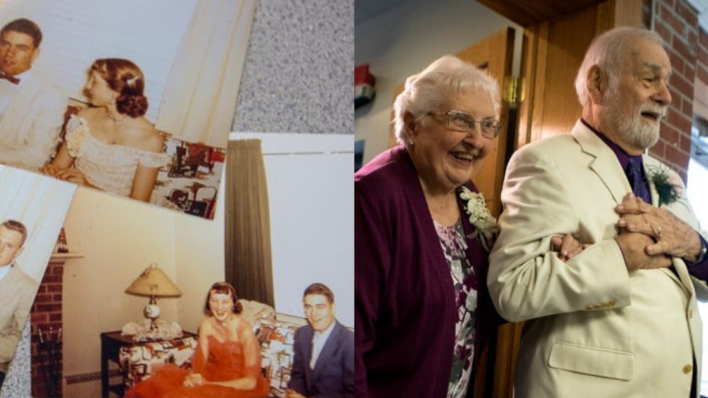 64 Years After Their Breakup, He Drove 500 Miles to Marry His High School Sweetheart

In life and in love, it’s easy to talk about the one who got away. You know, that great love that was magical for the moments it lasted – and then fell through our fingertips. We assume that love lost is lost forever, except sometimes, in rare instances that feel like they are right out of an epic story, they come back to us.

In 1950s, television was barely a thing, and the world was a very different place, but Annette Adkins and Bob Harvey were already in love. They were high school sweethearts at Gar-Field High School in Woodbridge, Virginia.

It was a typical high school relationship at that point. They went to prom and posed for pictures together. However, their romance was about to hit a giant barrier – and it would going to be decades before they even saw those photos!

“I thought I was in love,” Annette said. That summer, Annette went on a Florida vacation with family. That summer, she met another man and fell for him. She married that other man in 1961.

Annette remembers telling Bob about her new romance. “Bob comes to me. I’m at my locker. He has his arms spread out for a hug, and I said, ‘Bob, I found someone else and I don’t want to date you anymore.’”

I regret the harshness…

“She broke my heart the second time then,” Bob said.Bob recalls being polite and a gentleman. “Nice guy I am, the Southern gentleman, I said, ‘all right.’” And then he walked away.

Bob said the rest of high school, he tried to move on, but he was very lonely.

Try to understand this one: I’m still madly in love…

After graduation, the couple went their separate ways. And their paths did not cross again for over sixty years.

Over that time, both Annette and Bob were separately married and in happy relationships where they raised families.

In January 2015, Annette’s husband died, and Bob also became a widower, when his wife lost her battle with cancer in 2017. Bob was her caretaker until the end.

Then, a few months ago, Bob took a trip and found himself thinking of Annette, his high school sweetheart.

“A couple of months ago, she was heavy on my mind. I googled her.” That’s when Bob found John’s obituary and realized Annette had been a widow for more than four years.

My heart fell on the floor…

He worried that during those four years, she might have found another; he feared that he “might have lost her again.”

Annette had been thinking of Bob, too

Bob found Annette first, by making a donation to the care unit that took care of John Callahan during his last days. Then, he sent a card to Annette. In that card, he included his phone number.

I danced around the room…

He says, “When she called, I couldn’t talk. I was still madly in love with this woman.”

Annette confessed that she had been looking for him for a couple of years. They talked of meeting and she asked whether he could come to Ohio.

Bob got there to her home that week

He called Annette on the phone and she asked where he was.

“The door opened instantly,” Bob said. “My heart was soaring. I had brought flowers.”

Annette: “He held my face in both his hands and he kissed me.”

“She said she had thought of me over the years,” Bob says. “I love her dearly. I love her more every day.”

And now, they have gotten married.

A wedding 60 years in the making

Annette and Bob’s long-awaited nuptials made certain to honor their lost spouses and their children while also paying homage not just to their love as teenagers, but to the loving years ahead of them.

Bob said, “I’m giddy as can be… My heart is bursting. We’re looking forward to a very long-lasting relationship.”

Their story is a powerful reminder that it’s never too late for your epic love story. And when a second chance comes along, it’s up to you to seize it and make the most of it.