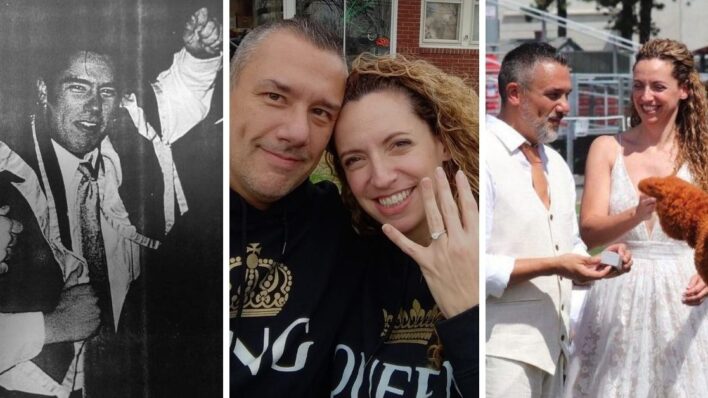 Homecoming King and Queen Get Married After Spending 28 Years Apart

Back in the 90s, Janet Fenner and Gregory Dabice were homecoming king and queen at their school. But college got them separated until they found their way back to each other, 28 years later.
By Aly Walansky    August 21, 2020

Back in the 90s, Janet Fenner and Gregory Dabice were homecoming king and queen at their school. But college got them separated until they found their way back to each other, 28 years later.

Way back in 1992,  Janet Fenner and Gregory Dabice stood side by side at Montclair State University’s football stadium. It was the real high school experience, being crowned homecoming queen and king, complete with scepters and tiaras.

Little did they know it would be over two decades, before they’d be reunited–and in love.

This week, 28 years later, they held another ceremony in that very same spot–their wedding.

He always thought she was “too good” for him

In the years before the fateful reunion, the two went on to lead separate lives, starting families with other partners. Between them they now have seven children, all of whom were present during their wedding.

Despite being the homecoming king and queen 28 years ago, Janet and Gregory did not date in college. But being part of sororities meant their paths often crossed.

He was the player fraternity boy and I was the goody-goody.

Janet, 48, was a straight-A student who ran track and was involved in student and sorority government. Similarly, Gregory didn’t feel like he was a good fit for her.

I wasn’t right for her in any way. She was too good for me and I knew it.

After divorce, they got their second chance at love

After college, Janet and Gregory two lost touch. They got married and formed families. But both their marriages ended in divorce in 2016.

That’s when things got interesting. After divorce, they both joined Bumble, and through magic of social media, rediscovered each other.

I was stunned in so many ways. She looked the same. I hadn’t even thought of her in years and there she was. It was unreal.

Gregory even sent Janet’s photo to one of his fraternity brothers to make sure it was the same girl he knew.

He told me: ‘That’s Janet, all right. Go and get your queen.’

Watch this Goalcast video that will change your perspective on love:

One message that changed everything

Gregory sent her a message: “Is that you, Janet?” and the two met that night at a bar near her home. They ended up talking for hours.

“There was instant trust and warmth,” Gregory, now 50, said.

We just slipped right into the conversation as if we were sitting in the school cafeteria. I didn’t want it to end.

“It was so heartwarming to see him, his smile, his dimple. I remembered that dimple. It was like, ‘Death by Dimple, Game Over,’ ” she said, laughing.

A proposal far from traditional

When he got home, Gregory was so excited he posted about their “fairytale” meeting on Facebook.

“He continued to post after every date and every milestone,” Janet said. “He’s quite a poet and gained quite a following.”

They had a feeling this would end up working out “almost from Day One,” Gregory said, but waited a year to make it official.

But due to the current pandemic, he had to get creative for the proposal. So he hired the help of family members, who would drive by her house, with signs that spelled out “Will you marry me? Yes or no.”

Prior to the proposal, Janet and Gregory had been separated due to the quarantine, which was very difficult. “It was killing me,” Gregory admitted.

While the honeymoon has to wait, the two have been focusing on renovating Gregory’s home, so Janet’s sons could move in. They plan to add two bedrooms and two bathrooms to accommodate for 9 people, 2 dogs and a tortoise.

So far, the merging of families has been going really well.”That’s the magic of us. We have yet to have an argument, we are both laid back. We’re goofballs.”

This is what Gregory has been waiting for his whole life.

When you’re almost 50 and have been around the block and you come across each other, you know: This is what I’ve been waiting for my whole life.

Seize your chance when the moment comes

Gregory and Janet’s story defies everyone’s expectations. In their 50s, the two were able to find love when they least expected it. But that’s also because when they found each other again, they decided to seize their chance.

Sometimes the timing might not be right, but that doesn’t mean the connection is not worth pursuing if the door reopens later.