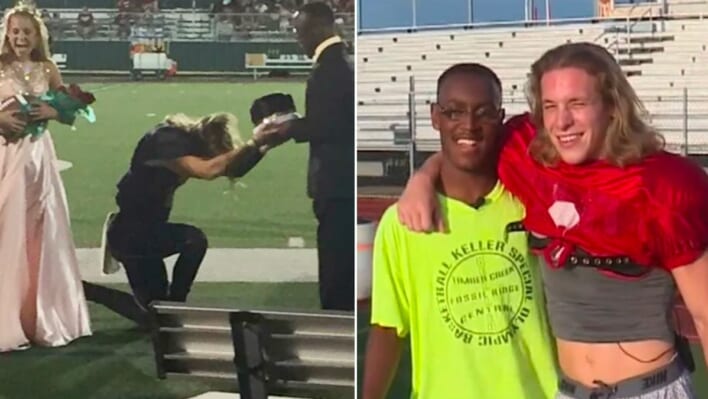 “If you spread a little bit of love and compassion around, that’s all we really need …. a little bit of positivity every once in a while.”
By Amanda Shaw    November 21, 2022

It’s not unusual for a handsome, high school quarterback to be named homecoming king. In fact, it’s expected. It is unusual, however, when he gives his crown and title away. The crowd at the football game and homecoming ceremony certainly thought so—and they cheered wildly.

Quarterback Max Akin, 17 years old, led his teammates to victory, 40 to 12. He threw three touchdown passes and ran for two more that night, but his athleticism isn’t what he’ll be remembered for.

At Fossil Ridge High School in Dallas, Texas, Akin is known for his big heart. His football coach says that he’s always cheering for the underdog. Akin was one of several contenders for the homecoming crown that year, as was the football team manager, K.L. Norwood, a fellow student with cerebral palsy.

Akin Touches the Hearts of the Entire School

In a school video, Akin commented on the homecoming competition: “I think whoever positively uplifts this school the most should win.” The competition was fierce, and there were a lot of great contenders, but Akin said he “knew exactly who deserved the crown.”

So when Akin was crowned the homecoming king at that night’s game, he paused briefly for a photo with the homecoming queen before beckoning his team’s manager up to the sidelines. Then he got down on one knee and presented the crown to K.L. Norwood.

RELATED: Woman Loses Half a Million Dollars After Refusing to Tip for Pizza – Her Server Has the Best Response

While the crowd cheered, Akin hugged his friend tight and told him he loved him. “He started crying,” Akin said later, “which made me want to cry. But I told him, hey, I still have to get out there and play in the third quarter!”

Akin said that Norwood deserved the crown because “he’s the most positive guy.”

Norwood was shocked when Akin presented him with the crown. “It was really nice of him to do that, and I’m actually glad he did, but yes, it did surprise me.” In a photo taken on the field, everybody is smiling.

“At practice, all the football guys love having him around,” Akin said. In his characteristically humble way, Akin added, “He’ll laugh at your jokes and make you feel a lot funnier than you actually are, me especially.”

In a way, Norwood shouldn’t be all that shocked that his friend gave him the crown. Not only is Akin known for his big heart, but Norwood is far from easy competition.

“Everybody loves K.L.,” Akin said. “You see him walking down the hallway and he’s shaking twelve hands at a time.”

Students lifting their peers above themselves is not something you see every day. So when it does happen, it deserves to be celebrated. Akin insists it’s an easy way to make the world a better place.

“If you spread a little bit of love and compassion around,” he explained, “that’s all we really need and something [that’s] lacking in today’s world—a little bit of positivity every once in a while. As corny as it may sound, treat everyone as you deserve to be treated, just like K.L. does every day.”