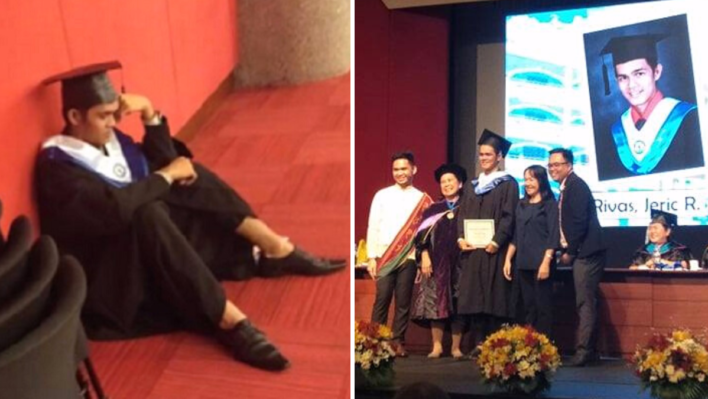 A student breaks down in tears after his parents fail to see him receive top honors at graduation.
By Amber Dowling    November 13, 2022

A student breaks down in tears after his parents fail to see him receive top honors at graduation.

Graduation is supposed to be a celebratory time — for kids and their parents. It’s a time to look back on all of the hard work a student has put in and wish scholars good luck on their journeys forward. So not having your support people there on the big day can be tough.

Why One Student Broke Down During His Graduation Ceremony

In 2019, a university student named Jeric Rivas was preparing to take the stage for his graduation from La Concepcion College in San Jose Del Monte Bulacan in the Philippines. It was a big day for him — he had graduated as the top student and hoped to celebrate with his parents when he walked onstage.

Unfortunately, his parents never showed up. Rivas tried to put on a brave face, but his disappointment was overwhelming. And so, as he walked up to accept his diploma for a Bachelor of Science in Criminology, he broke down in tears.

“I felt a mixture of happiness and sadness again,” Rivas later shared to Facebook, as translated byThe Mirror. “I looked to the right, looked to the left, and at the back and in front, all I saw were happy faces that were smiling,” he continued.

Rivas added that he tried “to hold back from crying,” but he couldn’t. So he sat down and had an emotional moment. “I felt envy,” he explained.

Why One Graduate’s Parents Didn’t Show Up

Part of the reason Rivas was so upset was that his parents had made a habit of not showing up over the years. In his post, he explained how he earned top honors in his class when he was a kid, but his parents didn’t come to that celebration either.

At another ceremony, Rivas had his friend’s parents walk up with him instead.

The graduate didn’t reveal why his parents or other relatives weren’t there, but he did explain how, when he was younger, he had been kicked out. “Stayed with relatives, but what happened to me was painful, almost no one wanted to accept me, I was always kicked out, I moved to another place to live,” he wrote in the post.

He explained how he finally decided no one could ever do that to him again, so he took on random jobs to pay for his studies. He worked in factories, was a student assistant, did the fast food chain circuit, and was also a janitor, maid, and a cook.

While Rivas was highly disappointed, again, he wasn’t alone. Not this time. As he walked towards the stage, his teachers got up and supported him. He recalled how one professor walked onstage with him.

“One of my other professors was standing there onstage waiting for me and gave me a hug. While that moment took some of my sadness away, I still ended up crying in front of everyone,” he wrote.

RELATED: Teen Skips Graduation Because Parents Can’t Make It – His Manager Steps In

Rivas then thanked his teachers and everyone else who helped him over the years so that he could get to that point.

“I hugged the professors who were on the stage one by one, just to reduce the weight that I felt,” he said. “I didn’t think of being ashamed in front of people because of my crying. When I came down, I shook hands, one by one, with my fellow graduates, and it felt good that they were saying they were proud of me.”

How a Student Realized That Family Isn’t Always Blood

Rivas’ story went viral, with more than 11,000 shares and even more likes. People in the comments were also supportive, especially with one very important message: family isn’t always blood.

There’s a saying that you can’t choose your family, but you can choose your friends. By that token, a chosen family can be just as important as the one you are born into. Rivas didn’t have his parents or relatives with him on that big graduation day, but he had his professors and friends by his side, rooting him on.

It’s a small reminder that sometimes it’s better to put our energy into those who give us energy back rather than fight for something that will never be just because of blood relation. Everyone is worthy of love and acceptance, we just need to learn that love and acceptance can sometimes come in surprising forms and ways.

And if you are a parent with a busy schedule or whose kid has maybe let you down, this story is also a great reminder that no parent is perfect. But so long as you make a point of always showing up, that’s what really counts.