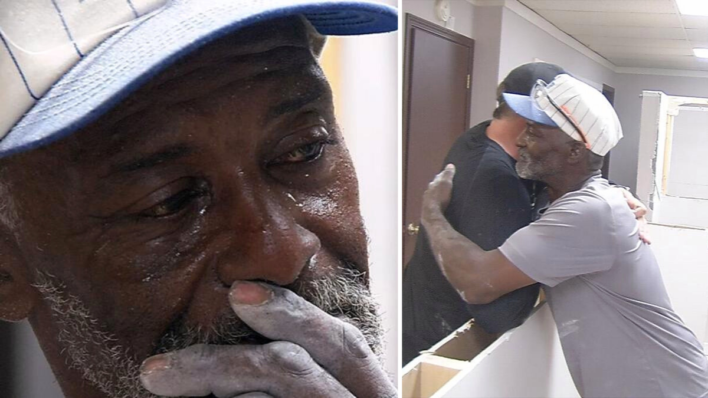 Down on his luck, one man’s humility and perseverance got him out of a dire situation.
By Sophie Babinski    May 14, 2022

Down on his luck, one man’s humility and perseverance got him out of a dire situation.

The COVID-19 pandemic changed many things for many people. Most of those changes were, sadly, for the worse. People lost their livelihoods, their loved ones, and many of the things we take for granted.

One Kentucky man lost almost everything, but his perseverance and humility helped him start getting things back in order.

Robert Simpson, based in Louisville, was working as a handyman to make ends meet for his family. When the pandemic hit, the odd jobs that made up most of his income dried up, and Robert found himself without any way to pay his bills.

He lost his apartment, leaving himself, his girlfriend, and their 6-year-old son homeless. They had to move into a motel, which still cost the family almost $60 a day — a fee they could not afford with nothing but a disability check coming in.

RELATED: Principal Helps Homeless Man Find Food at a Best Buy – But Breaks Down When He Hears His Story

Robert realized he had to take matters into his own hands. He made a sign reading: “Handyman, 25 years exp., Need work.” His sign was different from that of other panhandlers. His sign was not asking for a handout, it was asking for a chance.

Robert stood on the side of the highway every day for a week, his resolve never wavering despite the intense heat and beating sun. Passersby were impressed by his attitude– they even shared pictures of him on social media. One such photo gave him the break he needed.

The owner of Greenstar Home Remodeling, Kyle Kark, saw a photo of Robert and his sign, and decided to reach out to offer the struggling man a job. Robert explained his diverse professional background to Mr. Kark, saying that he had experience in painting, mechanical work, landscaping, and roofing. The resume impressed Kark, who brought Robert on to help with some demolition work.

Even though Kark could not offer any full-time positions, he was excited to be able to get work for Robert whenever he could. Kark even went as far as bringing Robert to and from job sites, since the latter had no access to transportation.

On Robert’s first day, Kark bought his whole family groceries, in addition to paying the man his day rate. The two men were very happy to have found each other. Kark, because he got help from a reliable and talented worker, and Robert because he was able to regain his dignity, and his livelihood.

If he’s coming to work and showing up and doing good work, and I got work for him, I’ll definitely keep him on and help him any way that I can.

How Generosity and Hard Work Sparked a Friendship Between Two Men

Robert Simpson’s humility and hard word impressed Kyle Kark so much that he decided to not only continue to offer Robert jobs, but to raise money from the community for his new friend.

But he and his family are without essential needs, such as a vehicle and a permanent place to stay, so it is Green Star’s hope that you will join us in supporting our neighbor.

“Rob is a humble man and has not once asked for a dime he has not earned,” he went on to say.

We should all take this story as inspiration for our own lives. From Robert Simpson, we can learn to be humble and continue to work hard to earn what we have in life. From Kyle Kark, we can learn to give strangers opportunities. What an amazing duo!