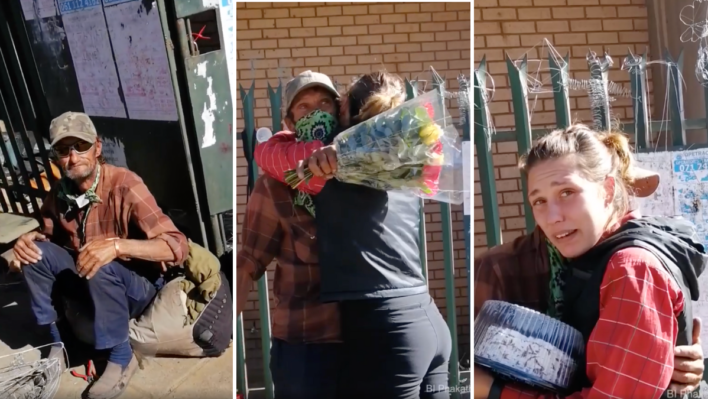 Homeless Man Tells Stranger It’s His Daughter’s Birthday – Instead of Walking Away, He Helps Plan a Surprise Party

A kind stranger came across a homeless man who mentioned it was his daughter’s birthday and he decided to help him surprise her.
By Sophie Tolias    January 19, 2023

A kind stranger came across a homeless man who mentioned it was his daughter’s birthday and he decided to help him surprise her.

A YouTube video of a homeless man surprising his daughter on her birthday went viral and it’s warming people’s hearts.

The video is on the channel of BI Phakathi, a motivational speaker, filmmaker and life coach from South Africa that helps underprivileged and homeless people with food and money.

In this video, a homeless man was sitting on the sidewalk when Phakathi walked by and started a conversation with him. During their chat, the homeless man mentioned that it was his daughter’s birthday.

The man thought that it was a simple conversation. But, after a few minutes, the kind stranger returned with a cake, flowers, and other supplies so they could surprise the homeless man’s daughter.

“Let’s hide everything,” Phakathi tells them. “We’re going to sing happy birthday to you.”

The homeless man and two of his friends, started to set up the stuff. The excited dad removed the flowers from the bag and held them behind his back while he waited for his daughter. The other two men held the cake and another surprise.

The homeless man admitted that it was the first time his daughter would have a cake on her birthday in a very long time.

RELATED: A Homeless Man With Nowhere to go Asks For Someone to Share Thanksgiving With Him — He Gets Hundreds of Responses

“It’s the first time in a long, long time that I’m doing this,” he shared.

The men hid the surprises until his daughter walked by, and they all began singing happy birthday.

Taken aback by the surprise, his daughter thanked him and they hugged while the homeless man held back tears. They said “I love you” to one another before turning to the kind stranger and thanking him for this special moment.

The kind stranger shared that he had another gift for the woman. He handed her some money, which she accepted as she made her way back to work. Before he left, Phakathi also gave the homeless man and his friends some money and they thanked him for everything.

How One Video Is Inspiring People to Do Better

The video, posted on YouTube, went viral and the comments show that it melted hearts around the world.

“The true gift you gave that day was giving a father the opportunity to make his daughter happy,” one commenter wrote.

RELATED: An Anonymous Man Is Feeding the Homeless at Night Dressed as Spider-Man

“I love how you can see that she’s still proud of him. She’s proud that that’s her dad. They both really deserved this,” another one wrote.

Along with the commenting on the beautiful moment, many people shared how this makes them want to do better.

“Watching this makes me want to be a better person,” one person wrote. And another one said, “I’d rather binge watch his videos than watch any other streaming apps out there. I’m learning a thing or two from this guy and this cures my soul.”