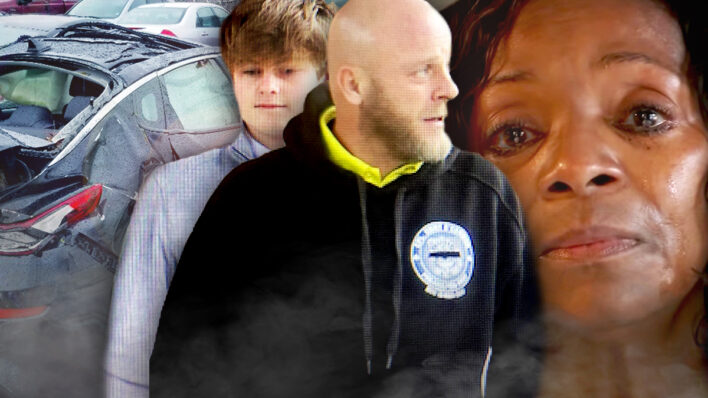 Driven by nothing but their moral compass, one awesome father-son team rescued a nurse from critical condition.
By Bryan Liquor    March 21, 2022

Driven by nothing but their moral compass, one awesome father-son team rescued a nurse from critical condition.

It was a cold evening in Fort Washington, Pennsylvania and nurse Pamela Jones was driving home from doing what she’s always done: taking care of others. However, in the blink of an eye, she’d be the one in desperate need of help, after a car hit her while switching lanes on highway 276, sending her slamming into an embankment.

Despite the obvious wreckage, cars whizzed by her without so much as slowing down. Recalling that moment to ABC, Jones said she was in disbelief.

There were at least 150 cars that passed on the turnpike, I can’t believe nobody stopped

With no help in sight, things were looking bleak for the nurse, mother and grandmother. Luckily, at just the right moment, along came Mike Lottier and his 15-year-old son Drew.

The father and son noticed debris from Jones’ mangled car scattered all over the highway and her shattered sunroof, and as they pulled over, they could hear her screams for help. That’s when father and son sprung into action.

Mike immediately called 911 as son Drew stayed with Jones to keep her calm. First responders quickly arrived on the scene, and Jones thankfully made a full recovery.

Reflecting on that night, Drew said that his motivation to act was simple:

While Jones came out of the ordeal in one piece, the same can’t be said of her vehicle, which was totaled in the accident. To raise money for a new one, Jones started a GoFundMe campaign. She writes how vital having wheels is to her helping others.

“Because I see patients in their homes, my car is basically my rolling office,” she wrote. “I can’t provide care for my patients if I cannot get to them. I am asking for any monetary amount you can afford towards helping me to buy a new car so I can get back to providing care to my many patients.”

When Another Person Needs Help, Passing by Is NEVER an Option

While the Lottiers are quick to downplay any praise, Jones knows who to thank for her being alive today.

Mike Lottier and his 15-year-old son, they were my angels on this earth, and I am forever grateful to them.

When you think about it, both are right. Jones should thank her lucky stars for the incredible father and son pair who stopped and helped when no one else would.

Yet the Lottiers have a point too: Their motivation wasn’t fanfare; they were just doing what they’d hope someone else would do for them or the ones they loved.

Chances are, if those 150 drivers who passed by Jones had a moment of self reflection , they too would realize that if the tables were turned, they’d pray that someone like the Lottiers would stop everything to help.