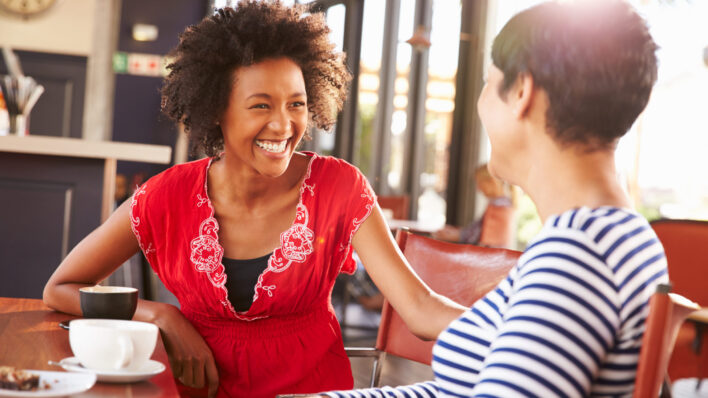 7 Quick Tips to Improve Your Communication Skills (with Anyone)

Back in high school, I could barely bring myself to look at a girl, let alone ask her out. I
By Matt Valentine    January 7, 2018

Back in high school, I could barely bring myself to look at a girl, let alone ask her out.

I was the definition of shy, with a sprinkle of social anxiety, and this was nowhere more apparent when it came to interacting with new people.

However, I’ve come a long way since then. And while I know it can be difficult especially for those that weren’t naturally gifted with great communication skills, I’m proof that it’s possible to become a better communicator if you’re willing to put in the work.

And it’s worth it, as better communication skills will help you in literally any and all endeavors you ever put your time and effort into. Below are seven quick tips to improve your communication skills. These are things I’ve picked up from years of working to become a better communicator, both through speaking, listening, and everything that happens “in between the lines” of communication.

1. Know who you’re talking to

One of the first things you should work on when looking to improve your communication skills is deciphering who it is you’re speaking to when you’re communicating.

This includes everything from where they’re from to what their personality and emotional temperament are. This affects how you communicate with someone as much as anything, from the language you use to what kinds of stories you tell to communicate a point, so whatever you can garner before and during a conversation can go a long way to improving how effectively you’re able to communicate your message.

2. Body language is as important as the words you speak

Body language is, for the most part, automatic and transmits how we’re feeling emotionally in any given moment. However, your body language also communicates to others how you’re feeling, sometimes communicating emotions we wish not to show – like a lack of confidence.

However, the good news is you can be proactive and influence your own body language, like sitting up straight instead of hunching over, widening your shoulders instead of slouching, or adopting a “power pose” akin to your favorite superhero behind closed doors before an important meeting. And, by doing so, you won’t just improve your ability to communicate, you’ll also help yourself by finding more confidence in adopting a more powerful physical position.

Other basic rules for good body language when communicating include always maintaining eye contact as well keeping an open posture (i.e. not crossing the arms and facing your chest towards the person you’re speaking with). Given the age we live in, I’d be remiss to leave out tips for communicating digitally. And this is easily one of the easiest, but also single most useful, of any I’ve found.

When communicating in a professional environment, typos can make a really bad impression. However, I’ve found that most people have an interesting mental block here and think that they always write perfectly. I have it too, but I can attest to the fact that typos don’t escape anyone– even professional writers.

So, do yourself a favor and proof your writing, whether it’s a simple email, a report, or (gasp) your resume.

4. Say just enough to get your point across

How do you do that? Before you speak, think about why you’re responding to someone, or what you’re trying to communicate, and what the essence or point is of your response. It’s a difficult skill to master but this can get you started in the right direction. The truth is, most of us are just too self-absorbed to care (in a natural kind of “that’s our nature” way, not a conceit). We’re too busy thinking to ourselves that you’re judging us often times. And if the person doesn’t care, they’re definitely never judging you the way we tend to convince ourselves others are.

What is happening within us often magnifies what’s going on outside of us, so if you can remind yourself of this when you’re communicating it will give you a sense of relief that allows you to relax and communicate more clearly and confidently.

Similar to the point above, we often feel as though we’re clearly communicating something when, in reality, we’re not being clear enough.

The average of the first group, the tappers, estimated that half (fifty percent) of the songs they tapped would be guessed correctly. Surprisingly, less than three percent of the one-hundred and twenty songs were guessed correctly.

This study displayed an important lesson: something we think we communicated clearly often wasn’t clear enough. But how do we do this? That’s where the magic of storytelling, hand gestures, and other visual mechanisms come into play.

There’s a lot you can do the communicate more clearly, but the best way is to often just give more than one perspective of the same thing so people can see it from different sides. 7. Learn how to listen (really listen, not just stay quiet)

Listening is one of, if not the, most important aspects of communication. Because communication is the process of interacting and transmitting messages with others, you can only be so good at it if all you ever work on is being a good talker.

To some degree, listening is a quality that naturally arises as someone learns to refine themselves and their ability to communicate because it quickly becomes apparent that in order to communicate effectively you need to know what the other person is saying and feeling. However, it still needs to be an intentional effort.

When communicating with another, make it a point to listen closely to not just the words they speak, but also to their body language, and the emotions they’re displaying. When communicating there are all kinds of nonverbal cues you can pick up on that will tell you how the other person is feeling and responding to your words.

Communication skills are one of the most important of all, so it goes without saying that by investing in improving your ability to communicate, you’ll be well-served. Use these quick tips to take your communication skills to a new level and reap the benefits in both your personal and professional life that come from being a more effective communicator.