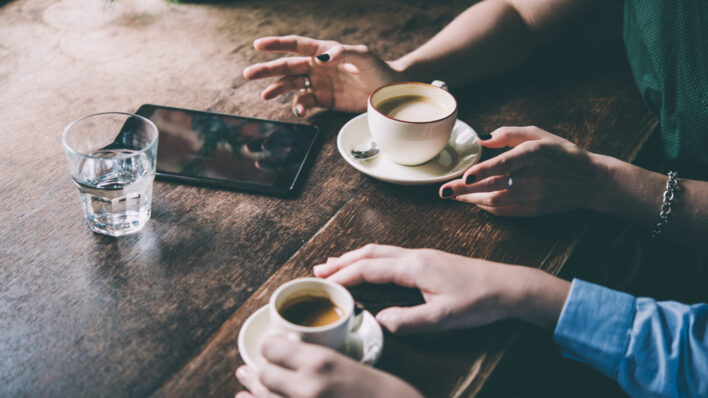 It’s only natural – we’re (mostly) all selfish. It’s no surprise that most of us have our own interests at
By Matt Valentine    November 14, 2017

It’s only natural – we’re (mostly) all selfish. It’s no surprise that most of us have our own interests at

It’s no surprise that most of us have our own interests at the forefront of our minds. For thousands of years, we had to defend ourselves from attacks and fend for ourselves in the wilderness. Harsh climates, dangerous predators, and few resources meant life was hard and we had to look out for number one.

And that’s okay to a point. Being selfish can be healthy. If we didn’t look after ourselves we wouldn’t be in very good condition. And when you’re not in very good condition, there isn’t much you can do to help others. However, there are glaring problems with this, especially in the modern world.

One of those problems is that this obsession with ourselves pours over into the way we converse with others. And it shows very clearly to anyone who pays attention. If you consider yourself a professional or aspiring entrepreneur, it’s important to work on your communication game or it could end up costing you big time. I like to listen. I have learned a great deal from listening carefully. Most people never listen.

When engaging in conversation, most of us can’t wait for the chance to talk the other person’s ear off, having less of a conversation and more of a “let me listen to my own voice” session than anything else.

But over the years I’ve noticed that high performers do something entirely different when engaging in conversation: they listen.

I started noticing it at an old insurance office I used to work for, where I got into the habit of paying close attention to the behavior of the top performers there. Most of the newer and less successful producers would talk your ear off if given the chance, and not to ask questions. They’d talk all about what they would plan to do with little to show for it. All me, me, oh….me.

When someone new came in, you could always tell the difference between whether they were going to be successful or not depending on how they interacted with the top performers. If they asked questions and expressed a desire to learn, great sign. If they talked all about what they were going to do (me, me, me), bad sign.

But the top performers were different. Completely different. They’d talk so little it was as if you were talking to a different species. They’d sit there and listen intently, occasionally asking a question who, if they were speaking with a newcomer or low-performing producer, would then proceed to ramble for another five to ten minutes and (maybe) eventually answer.

But it didn’t stop at that insurance office. Over time, I noticed this distinct communication skill in virtually all of the most successful people I would come to meet. The difference was they learned the power of listening. They learned to stop this automatic behavior, get out of their head, and communicate in a more intentional manner.

If you’re already an expert communicator, good for you. I respect anyone who has developed their communication skills to the point that they can move about in a conversation in this way. It’s truly an invaluable skill that will serve you for the rest of your life.

If you’re not an expert communicator, especially if you’re an aspiring entrepreneur or professional of any kind, it would do you much good to devote time to upping your communication game. And the power of listening and communication more intentionally is, in my opinion, the most important communication skill of all.

Not an expert communicator? What to do about it

As opposed to reacting automatically and talking about themselves, expert communicators move about a conversation consciously, intentionally, listening when important and speaking when their words will provide value. They know why they’re conversing and have a clear goal for the conversation.

This is the point you want to get to in your communication skills. And there are essentially two skills to work on to get there. The great part is you can begin working actively on both of these skills immediately with no prior training at all. It will take time to develop them, however, as mentioned the rewards for developing your communication skills will serve you invaluably for the rest of your life.

First, work on improving your ability to listen. Listening is like a muscle, you need to put in the work for it to grow. But don’t bother setting the goal to listen more intentionally in a general sense, it probably won’t work. You’re already programmed, so you need to go about it differently. Instead, make it a goal to once a day engage in a conversation solely for the purpose of working on your listening skill. If you go into a conversation with this you’ll keep it at the forefront and be far more likely to actually practice it in the conversation.

Second, work on answering intentionally. To put it simply, this is just the practice of thinking before you speak. It’s all about moving more consciously when you communicate, and both listening and speaking intentionally are two sides of that coin. To work on speaking more intentionally, do the same thing and set a goal to engage in one conversation every day with the goal to make every one of your responses intentional and conscious.

By working on both of these valuable conversational skills, your communication game will increase tenfold. And these skills aren’t just valuable in your professional life, they’ll serve you in every area of your life from professional to family for the rest of your life. So, get out there and start communicating.