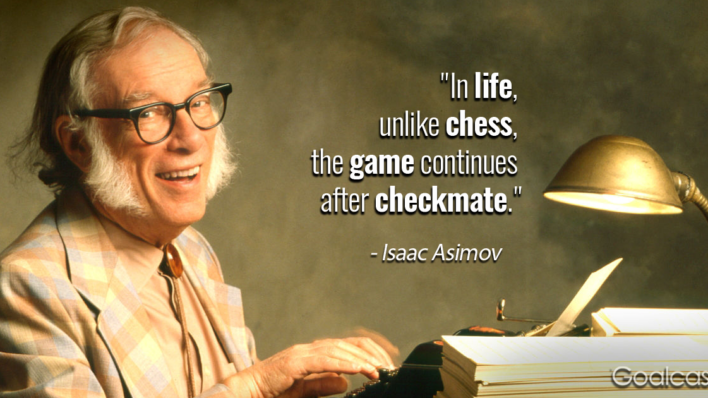 25 Great Isaac Asimov Quotes on the Science of Life

Isaac Asimov was a Russian-born American science fiction writer. Here are 25 great Isaac Asimov quotes on the science of life.

Asimov fell in love with learning from an early age. He even taught himself how to read by the time he was 5 years old.

During World War II, he worked at the Naval Aviation Experimental Station in Philadelphia, and after getting his M.A. and Ph.D., he was hired as an associate professor of biochemistry at Boston University School of Medicine.

However, Nightfall (1941), I, Robot (1950)– later turned into a movie starring Will Smith)– and the Foundation trilogy (1951) have ranked him as one of the greatest sci-fi writers out there.

While science-fiction was his favorite genre, Asimov has also written books on a wide variety of subjects, such as astronomy, biology, math, religion and literary biography.

Asimov hoped that his ideas would outlive him, and they did, as the world continues to contemplate on his literary legacy.

Here are 25 Isaac Asimov quotes on the science of life

Maybe happiness is this: not feeling like you should be elsewhere, doing something else, being someone else.

People think of education as something that they can finish.

To succeed, planning alone is insufficient. One must improvise as well.

A subtle thought that is in error may yet give rise to fruitful inquiry that can establish truths of great value.

It has been my philosophy of life that difficulties vanish when faced boldly.

People who think they know everything are a great annoyance to those of us who do.

Humanity has the stars in its future, and that future is too important to be lost under the burden of juvenile folly and ignorant superstition.

Violence is the last refuge of the incompetent.

All you have to do is take a close look at yourself and you will understand everyone else.

When stupidity is considered patriotism, it is unsafe to be intelligent.

The easiest way to solve a problem is to deny it exists.

In life, unlike chess, the game continues after checkmate.

Your assumptions are your windows on the world. Scrub them off every once in a while, or the light won’t come in.

Never let your sense of morals get in the way of doing what’s right.

The day you stop learning is the day you begin decaying.

Science-fiction writers foresee the inevitable, and although problems and catastrophes may be inevitable, solutions are not.

If you have talent, you will receive some measure of success – but only if you persist.

Uncertainty that comes from knowledge (knowing what you don’t know) is different from uncertainty coming from ignorance.

Self-education is, I firmly believe, the only kind of education there is. The only function of a school is to make self-education easier; failing that, it does nothing.

Writing, to me, is simply thinking through my fingers.