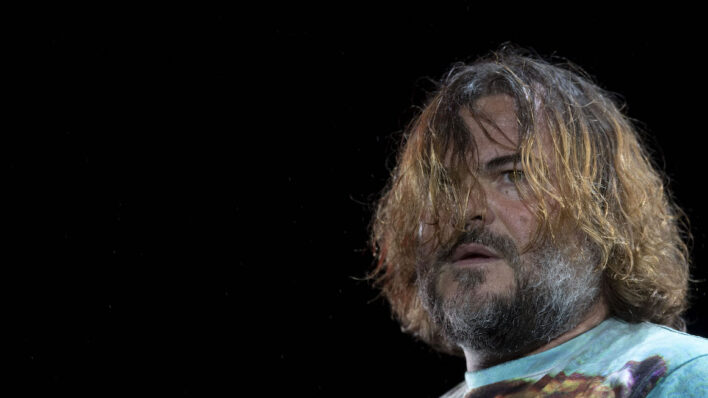 How Jack Black Battled Destructive Grief By Pushing His Limits

Jack Black lost his brother, Howard Black, when he was young, a tragedy that pushed him into a rough patch. However, he found solace in rock music.
By Aly Walansky    January 14, 2020

Jack Black lost his brother, Howard Black, when he was young, a tragedy that pushed him into a rough patch. However, he found solace in rock music.

In the earlier parts of his life, Jack Black went through a rough patch. His elder brother, Howard Black, passed away from AIDS, leading him to turn to drugs in order to cope with the terrible loss. It took him years to get on the other side and beat his unhealthy habits. And he owes part of his recovery to no other than his late brother, who introduced him to one of his passions, rock music.

Finding reflection in his roles

In 2015, Jack Black starred in a children’s movie based on the Goosebumps series, and it was a great opportunity for reflection on his own demons.

“Goosebumps was a great adventure,” Jack said in a 2015 interview with Parade. Despite being a movie aimed at children, he managed to find more profound facets to his role.

It’s about forgiveness and not letting your rage and thirst for revenge control you, but it’s also about how some of those darker emotions can be used to create great masterworks.

He could understand his character’s motivations well, which he described as “a guy with a dark past and a brilliant mind, wrestling with his own demons, literally.” It was a role he could heavily identify with.

The turmoil in his teenage years

Much like his Goosebumps character, Black has had to deal with his own darkness and fears. He was only 10 years old when his parents, aerospace engineers Judith Love and Thomas Black, divorced.

By the time he was 14, he was struggling with substance abuse and had other problems. He was a reckless teenager with wild tendencies at times, as the actor has said in interviews.

“So much so that I think I’m lucky to be alive. Teenage boys feel immortal. It’s that weird mix of hormones and not yet fully formed brains. They actually are insane. I should have been put in jail. I got into drugs and I stole money from my mum. It was a bad time,” Black said in an interview with The Guardian.

I remember just lots of turmoil from that time period,” he says. “I was having a lot of troubles with cocaine . . . I was hanging out with some pretty rough characters. I was scared to go to school [because] one of them wanted to kill me. I wanted to get out of there.

Jack Black to The Guardian

He was ultimately sent to a private school for “troubled youth” in Los Angeles. The move was not a negative one, as he found an opportunity to start again. “Most of the other kids there were expelled from other schools, but I went voluntarily,” he says. “It was a place to press the restart button.”

Speaking with The Herald Sun, he later spoke about his own past struggle with substance abuse. That struggle ultimately prepared him for becoming a better version of himself in the future. “In my wild, younger years I’ve definitely gone down some risky roads and I’m very fortunate to still be alive, to be honest with you,” he said. “I partied pretty hard, and man, I definitely had a very robust, ridiculous, idiotic period in the 80s'”

Soul searching was not always something Black found easy to do and a lot of it was due to his upbringing. “Being raised a Jew, I didn’t have any kind of confessional,” he said. “I couldn’t talk to my parents about the things that I was most guilty about.”

Despite the fact that his father loved him very much, he could not confide in him. Thankfully, he found a nonjudgmental ear in his school’s therapist. “I spilled my guts, telling him I felt guilty about stealing from my mom to get money for cocaine,” he admitted.

The experience enabled him to release the immense guilt he had been feeling and take a step towards moving on. He described it as life-changing moment:

I cried like a baby. It was a huge release and a huge relief. I left feeling euphoric, like an enormous weight had been lifted from me. It changed me.

He then discovered theater in college, and the release he found in performance. “As far back as I can remember, I loved putting on shows,” he says. “I loved acting. I loved the attention. Maybe there’s a connection in terms of finding an escape and always needing to be up onstage. The turning point was when I started thinking acting was what I wanted to do.”

He went on to continue studying at UCLA, and give himself a better chance at an acting career.

Trying acting as a career

“You can only really make a career of what you like to do,” he said. But for him, theatrical performance is more than just work or a career. It became a healthy coping mechanism, a healthy addicition, as he described:

When I come off a stage or a set after a good scene where I felt like I connected with something emotional and real, I can’t go to sleep that night. It really is a drug unlike anything else. When you get it, when you connect, it is that adrenaline rush of the game. It’s electric.

Jack’s healing led him to love and family

In his beginnings as an actor, Jack reconnected with a high school classmate, who is now his wife. They eventually got married in 2006. Jack had never envisioned marriage for himself, especially since he had lived through his parents’ divorce.

Before Tanya, I had always felt like marriage was not for me. I didn’t like the way it worked out with my parents. I didn’t ever want to be in a divorce, so I was never going to get married.

And kids came soon after. That too was something he didn’t think he was ready for until it happened. Jack is conscious that his past trauma has creeped up into his parenting. “Losing a family member is the worst thing I could imagine,” he said.

Since he has lived through it, he wants to protect his children at all cost. He admits that is “a little bit of a helicopter dad hovering above [his] kids and making sure that they never are in harm’s way.”

A loss that still haunts him

Back in 1989, Black lost his older brother Howard to AIDS. It’s a loss that still affects everything he does to this day. It is no coincidence that Black credits his current musical efforts to his brother, who introduced him to rock.

He was a big influence on me. He took me to my first rock concert. I was 11; he was 23. He was so vibrant, creative, amazing. He shaped my taste in music.

Jack Black went on to say that they “were robbed of something precious” when his brother passed away. However, despite the dark spiral of his early years, he managed to reconnect with his love for rock music.

Many actors branch out into other areas of performance art but Jack’s decision to dive into the musical scene is especially personal, considering the intimate connection rock music has with his late brother.

Jack proves there are no limits to passion

In 1994, Jack formed a comedy rock duo called Tenacious D with Kyle Glass. Initially, their work was strictly onscreen, with an HBO 3-episode television series. Eventually, they went on to release their self-titled debut album in 2001.

Combining his love of comedy and rock music, Jack went on to have a successful career in music. Whereas most people could have considered him to be a typecast actor, he has proven that he is much more versatile. And to solidify his credibility as a musician, Tenacious D won a Grammy in 2015, for Best Metal Performance and even collaborated with the iconic Jack White.

These days, his life completely revolves around family. He doesn’t “go out for wild nights” anymore and is completely focused on his family. His return to music, to his late brother Howard’s passion, has been a way to honor his brother but also a healthy move from the turmoil of grief he lived through.

In doing so, he has shown that there is always a way to bounce back from darker periods in our lives. Not only can we do that, but we can always reinvent ourselves, without needing to lose sight of what made us who we are today. To Jack Black, music may always be intimately connected with his brother but it has also enabled him to process his grief and evolve in his artistic identity.