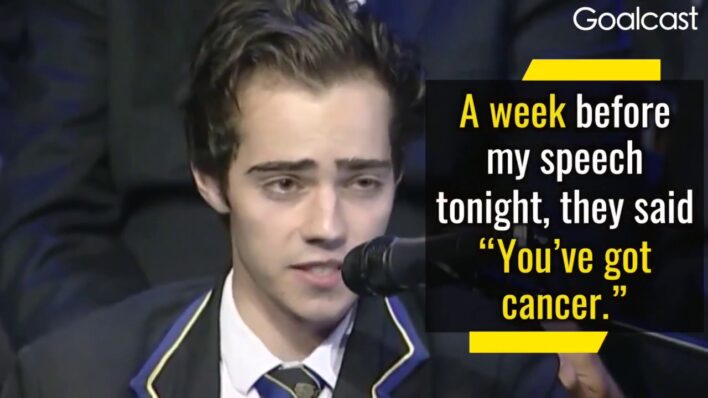 Jake Bailey | How to Face the Darkness With Dignity

Jake Bailey had just found out the most aggressive form of cancer known to science was ravaging through his body when he gave this inspiring, heart-breaking speech to his classmates.

But luckily, that speech isn’t about what’s to come. It’s about what an amazing year it’s been, and you didn’t really expect me to write a whole nother speech from my hospital bed did you? So it started like this. If I was seeing further it is by standing on the shoulders of giants. [Bernard and Chardress 00:00:38] compared us to dwarves perched on the shoulders of giants. They pointed out that we’re seeing more and further than our predecessors, not because we have keener vision or greater height, but because we are lifted up and born upon their gigantic stature and knowledge.

My middle name is Ross. I was given that not long before I was born because my great uncle Ross, he drowned in Sri Lanka. Mr. Ross Bailey was a crio search based kidney transplant surgeon. He was known for making a serious different to an extraordinary number of people’s lives back when organ transplants weer an amazing feat. And all of [inaudible 00:01:14] aside, he was the best in the world at it. He came from a working class background. The only one of his siblings to go to university. And he went on to save numerous lives because he could. Because he saw higher things. He dared to make a difference. We can’t all save lives by transplanting organs, but we can make a difference in our own way.

I wanted to share with you some words which I hold particularly close to my heart. Words which mean a lot more to me this year than they ever could before. It’s not the critic who counts, but the man who points out how the strong men stumbles, or where the do of deeds could have done them better. The credit belongs to the man who is actually in the arena, whose face is marred by dust and sweat and blood who strives valiantly, who is and comes short again and again. Because there is not effort with that area in short coming. But who does actually strive to do the deed. Who knows the great enthusiasm, the great devotion. Who spins himself in a worthy cause who at the best knows in the end the triumph of high achievement, and who at the worst, if he fails at least he fails while doing greatly. So his place [inaudible 00:02:33] with his cold intended selves that know no other victory, nor defeat.

Though you can’t be the best at everything, or even times at anything. What I can choose to have is moral strength. I wrote about this before I knew I had cancer, and now I have a whole new spin on it. Moral strength is about making a conscious decision to be a person who doesn’t give up when it would be easy to. to be [inaudible 00:02:58] because the journey is this arduous. Jim [Rong 00:03:00] said that others lead small lives, but not you. The others argue over small things, but not you. That others cry over small hurts, but not you. That others leave their future in someone else’s hands, but not you. Of course, during this moment at some point you have to face your fear of falling short. A fear of looking like a fool, a fear of not being enough. And being [inaudible 00:03:29] facing these fears everyday.

But here’s the thing. None of us get out of life alive. So be gallant, be great, be gracious, and be grateful for the opportunities that you have. The opportunity to learn from the men who have worked before you and those who work beside you. My challenge to each of you and myself is to continue to grow and develop for the better. The future is truly in our hands. Forget about long term dreams. Let’s be passionately dedicated to the pursuit of short term goals. Micro-ambitious. Work with passion and pride on what is in front of us. We don’t know where we might end up or when ti might end up. I don’t know where it goes from here for any of us. For me, for you, wherever we go and whatever we do, we’ll always be free in [inaudible 00:04:26].