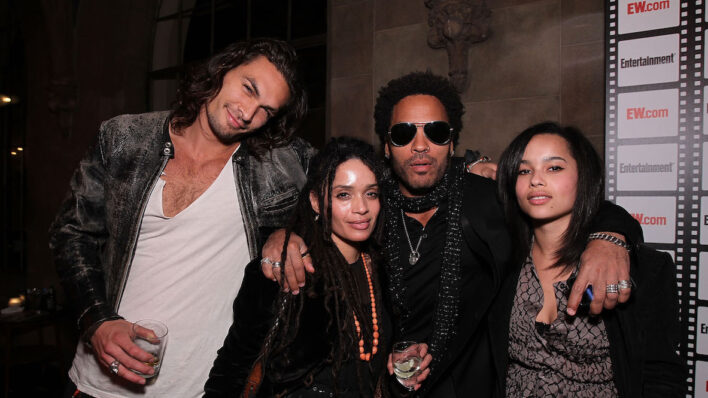 Jason Momoa’s relationship with Lisa Bonnet is perhaps one of the most wholesome celebrity romance, especially considering that it started with a love triangle involving no other than Lenny Kravitz. How did Jason and Lenny manage to make the best of a complicated situation?
By Shaoni Das    April 15, 2020

Jason Momoa’s relationship with Lisa Bonnet is perhaps one of the most wholesome celebrity romance, especially considering that it started with a love triangle involving no other than Lenny Kravitz. How did Jason and Lenny manage to make the best of a complicated situation?

It’s no secret that Jason Momoa is one of the hottest stars on the planet at the moment. The Hawaiian-born actor has been in a vast array of hit movies and television shows in recent years. From playing the terrifying Khal Drogo in Game of Thrones to an imposing superhero in Aquaman, the actor is known for tackling tough, masculine roles, which is often the norm for male actors wanting to make waves through the industry.

But a lot of people might not know that Jason is a complete softie at heart. On top of being a doting husband and dad, the actor continues to break traditions left and right. And that includes his unconventional but adorable love life

Jason got together with actress Lisa Bonet, best known as Denise Huxtable in the 80s hit television show The Cosby Show. However, being a couple may not have been that easy for them early on.

When the pair had met in 2005, Jason discovered that Lisa was twelve years older, had a teenage daughter, and had a very famous ex lurking around the corner. That famous ex happens to be rocker Lenny Kravitz.

Much like Jason, Lenny was one of the most sought-after celebrities at a certain time. In the early 90s, he became known for his outlandish fashion choices, his cool-as-a-cucumber rockstar persona, and his popularity among the ladies. As it turns out, these men had way more in common with each other than just the woman they both fell for.

They could’ve fallen into a classic love triangle

Lisa and Lenny go way back. The pair were introduced to each other in 1986 when Lisa was just nineteen. They eloped to get married on Lisa’s 20th birthday and in the following year, they welcomed their daughter Zoe. Safe to say that these developments took place much too fast for the young couple and ultimately their relationship couldn’t handle it. The pair divorced five years later in 1993.

There is nothing that unusual about divorce but when there is a kid in the mix, things become a tad more complicated. Lenny and Lisa, therefore, knew that they had to work together to ensure that their daughter was able to have the most stable upbringing possible despite the circumstances. Many might think that the arrival of a new man in Lisa’s life would upend the co-parenting efforts, but if anything, it turned to be a welcome addition for both the parents.

Jason could’ve easily gotten entangled in a messy love triangle, especially since Lenny and Lisa had nothing but love for each other. Lenny said a couple of years back that his relationship with Lisa was the most magical time in his life and that she helped to bring out the best in him over the years. Likewise, Lisa also remembers their time so fondly, saying that her heart was “blown open” from loving Lenny so much.

There is clearly a very rich history between the pair, and Jason’s appearance could’ve thrown a wrench in the works. Yet as soon as Lisa and Jason met in an L.A. jazz club in 2005, the sparks were flying and the rest is history. The pair fell in love hard and there was nothing they could do about it.

In that moment, love came and it came big, and he did not run as I think a lot of men do. He basically picked me up and threw me over his shoulder, caveman style!

So clearly, Jason wasn’t one to flee the scene when things got so tricky with Lisa’s family. He embraced her baggage whole-heartedly and began to love his stepdaughter like his own. His stepdaughter, Zoe, is an actress herself and has spoken out about how much she loves her stepdad, Jason. The two of them have been spotted at award shows together, have gotten matching tattoos, and even shared career advice with one another. Zoe even called Jason her “papa bear” in a delightful Instagram post.

But it’s not just Zoe that Jason chose to love and adore for the sake of his partner. His relationship with Lisa’s ex Lenny Kravitz is just as special for all the right reasons.

They found brotherhood in the most unexpected of places

Being able to love your stepdaughter is one thing but finding true friendship with your partner’s ex is another matter altogether. Yet these men beat the odds and found a way to truly respect and love each other despite the expectations. Over the years, as Jason and Lisa built a life together by getting married and having two children of their own, Lenny also had to find a place within this blended family. And he succeeded with flying colors.

But with the addition of Jason and Lisa’s two children, they’ve been able to create a modern, blended family. When everyone is together, they realize that they’re as whole and perfect as any other family out there.

What’s even more heart-warming is how Lenny and Jason have gone above and beyond to express their love for each other specifically. In an interview, Lenny said that Jason was like a brother to him. His social media posts reflected the same sentiment as well. A powerful love quote from Lenny Kravitz:

Our families are blended. I love [Lisa’s] husband — he’s like a brother to me — and I love the kids.

Lenny Kravitz to The Times

The same goes for Jason Momoa as well. Lenny showed up to support Jason at his SNL hosting gig and got a shout-out by him on social media — that’s when Jason revealed that the two of them have matching skull rings. The rings are said to represent the meaning of family and having each others’ backs, so we can only guess that Lenny and Jason have made that commitment to each other and their extended family.

Zoe also confirmed that both her father figures’ have a wonderful relationship. Not only do they get along with each other, but Lenny has also grown to be very close to Jason and Lisa’s two children as well.

In today’s day and age, there is no one single rule about what makes an ideal family. The conventional nuclear family may still be the norm but through Lenny and Jason’s relationship, we can tell that family is not determined by blood ties. Lenny and Jason found lifelong friends in each other and none of that would have been possible if they hadn’t fallen in love with the same woman.

Whereas others could have easily crumbled under the pressure of dealing with stepchildren and exes, Jason and Lenny decided to buck that trend and figure out their friendship on their own terms. In their case, they weren’t just willing to make it work when it came to their blended family; they actually managed to build a valuable, fulfilling relationship with each other, something that enriched both of their lives as a result.

Broken families can seem uneasy and terrifying, but if you’re able to work through it with a calm and generous mind, there is no way you can’t find those same rewarding bonds. At the end of the day, it’s the human connection that keeps us going and thriving. As long as we have people around us that love and care deeply about us, it really doesn’t matter if you’re related by blood or not.