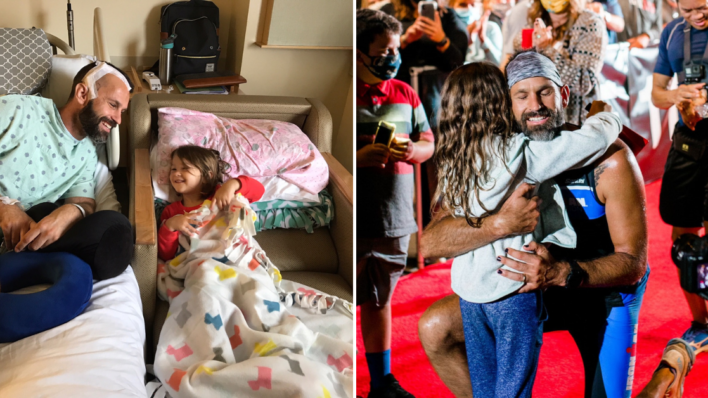 Most parents facing a premature death fret over funeral arrangements and wills. One father with that fate instead gave his
By Bryan Liquor    January 21, 2021

Most parents facing a premature death fret over funeral arrangements and wills. One father with that fate instead gave his family a gift that will live on forever.

As a boy, Jay Hewitt would watch Ironman competitions on TV, awestruck at the epic journeys across land and water. Watching with a sense of unattainable attraction, he recalls thinking that “they must be superhuman.”

His Ironman dreams faded until he and his wife Elizabeth welcomed their daughter, Hero, into the world. Suddenly Hewitt felt he wanted to be more and do more for her.

Then it came to him: When Hero was old enough to remember, she would watch her dad compete in an Ironman.

I would be able to look into her eyes and tell her that if I can do that, she is also capable of doing anything she sets her mind to

The day that changed everything

The day Hero would watch her dad compete in a competition was still years away until a seizure, and diagnosis of terminal brain cancer, gave Hewitt’s plans a new urgency.

“What popped into my mind was the promise that I’d made to myself when Hero was born. I had wanted to complete an Ironman when she was around 10 years old, but I realized I had no time to lose.”

Incredibly, following his first day of chemotherapy, Hewitt kicked off his Ironman training. He embarked on a grueling regimen to prepare his mind and body for the rigors of the race, all while battling chemo’s nasty side effects.

It had wife Elizabeth more than a bit uneasy.

Due to COVID, there was instead an Ironman VR, where racers crafted their own 140.6 mile course and competed individually.

Designing a route in his hometown, Hewitt plotted the finish line to be right in front of his garage, with someone special in mind.

“Having that moment of reunion with my daughter at the other side of the finish line, that’s gonna supply me with a lot of hope.”

With his daughter and wife sounding the opening horn, Hewitt was off to the races.

Supporters stormed the shores where he swam, police escorts corralled his bicycle and his coach even ran a mile alongside him as he grinded out the end. “I was really fuelled by joy and gratitude”, he says.

“I didn’t have much energy, but I gave my wife a kiss, handed my wife and daughter flowers and got down on my knees to say to Hero, ‘If I can do it, you can do it.’”

Jay Hewitt continues his cancer treatments, and although tomorrow isn’t promised, he knows that he’s made a lasting impact.

“Completing this Ironman was a grand gesture of love for my daughter,” he says.

“I get the sense that this experience will affect her in such a powerful, meaningful, hopeful way that she’ll carry with her forever.”

There’s no force on the planet or disease in the dictionary stronger than a parent’s love for their child.