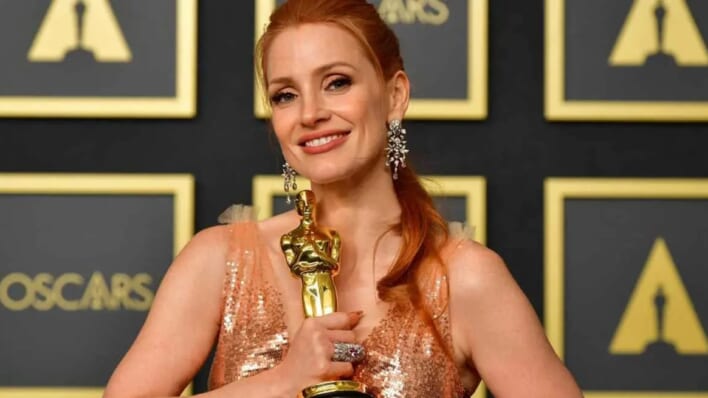 How Jessica Chastain Found Calm At Oscars After Will Smith Slap

Jessica Chastain walked onto the Oscar stage immediately after the slap heard around the world. But she found the calmness within herself to hold it together.
By Amy Lamare    August 2, 2022

Jessica Chastain walked onto the Oscar stage immediately after the slap heard around the world. But she found the calmness within herself to hold it together.

The 2022 Academy Awards will go down in history as one of the more bizarre events of the Academy’s 94 years of hosting the annual awards ceremony. The 94th Oscars even top the 2014 ceremony when John Travolta infamously mangled Idina Menzel’s name. While Chris Rock was presenting the award for best documentary feature, he made a joke about Jada Pinkett Smith’s hair, comparing it to the buzz cut Demi Moore had in the 1997 film G.I. Jane.

RELATED: Will Smith’s New Apology Video and What Chris Rock Teaches Us About NOT Being a Victim

This interaction immediately changed the vibe in the room. This was unfortunate for Jessica Chastain who won Best Actress for her performance in The Eyes of Tammy Faye. In her own words, “I walked into a very charged energy in that room, and I was trying to figure out how to just breathe and create a calmness,” she said in an interview with Net-A-Porter.

Jessica Chastain Reclaimed and Reset the Energy in the Room

Needless to say, after Will Smith slapped Chris Rock, the energy on the stage and at the Dolby Theatre was tense.  Jessica Chastain was nominated for Best Actress, the category immediately following the slap. Chastain said the night was a “weird night” overall and she was just trying to remain calm and restore order to the ceremony.

Her acceptance speech touched on discrimination, intolerance, and an exploration of what her purpose as an actress is. She didn’t have a fully prepared speech when she won Best Actress, and after the slapping incident, her emotions threatened to get the best of her. But she knew she had a global audience watching her and she had things she wanted to get across. She said, in part, “We’re faced with discriminatory and bigoted legislation that is sweeping our country, with the only goal of further dividing us.”

Chastain further channeled calmness in talking about Tammy Faye Baker’s “radical acts of love” and how inspired she is by her, saying, “we want to be accepted for who we are, accepted for who we love, and to live a life without the fear of violence or terror.”

Chastain admits she was “genuinely surprised” at her win. Not long after accepting her award, Will Smith won for Best Actor and gave a tearful acceptance speech with no trace of the animosity he displayed toward Rock just minutes earlier.

Other Celebrities Who Turned Oscar Mistakes Into Endearing Moments

Jessica Chastain’s poise and grace in the wake of the slap is inspiring and shows us that we don’t have to be part of the chaos. Take a deep breath to center yourself and move on from the moment with confidence. She isn’t the only person to have a weird moment at the Oscars, albeit she is the only one who had to deal with an issue that had nothing to do with her.

In 2013, Jennifer Lawrence won the Best Actress award for her performance in Silver Linings Playbook. As she stepped onto the stairs leading to the stage she tripped and nearly landed on her face. She recovered quickly and laughed it all off. When she got to the stage, the audience gave her a standing ovation. She said, “You’re only standing up because I fell on the stairs. I feel so embarrassed.”

RELATED: Jennifer Lawrence: Why Does Everybody Hate me?

Years later, she recalled the incident saying,  “They call my name and I’m elated and in shock. You kind of blackout…I can look back at it now that I’m a little bit older fondly…”

In 2014, John Travolta was on stage to present Tony-winner Idina Menzel’s performance of Frozen’s “Let It Go,” one of the Best Original Song nominees. But instead of saying her name, he introduced her as Adele Dazeem, and everyone was confused and worried for him. Two days after the incident, Travolta was making fun of his mistake, saying, I’ve been beating myself up all day. Then I thought … What would Idina Menzel say? She’d say, ‘Let it go, let it go…” For the record, Idina Menzel has no hard feelings over the mix-up.

In 2017, Faye Dunaway and Warren Beatty announced the Best Picture winner. They read La La Land as the winner. Only that wasn’t the winning film, Moonlight was. Somehow, the accountants that hold the envelopes with the winning names inside gave the presenters the wrong envelope. While the producers of La La Land were on stage accepting their award, the accountants were rushing on stage to correct the mistake.

What We Can Learn From These Celebs’ Difficult Moments

Jessica Chastain, Jennifer Lawrence, and John Travolta show us that even if you’re on the biggest stage in the world, mishaps and mistakes can happen. You can choose to fall apart or roll with the punches. Being able to easily assess a situation and adapt to the moment can save you from a lot of stress and angst.

RELATED: Watch 10 of the Most Inspiring Oscars Speeches of All Time

After all, we are all human and we all make mistakes, trip and fall, and occasionally have to present a calm face in a moment of chaos. If Chastain, Lawrence, and Travolta can do this on the Oscar stage in front of millions of people and not just survive but thrive, so can you.

Every single person can benefit from going a little easier on themselves.