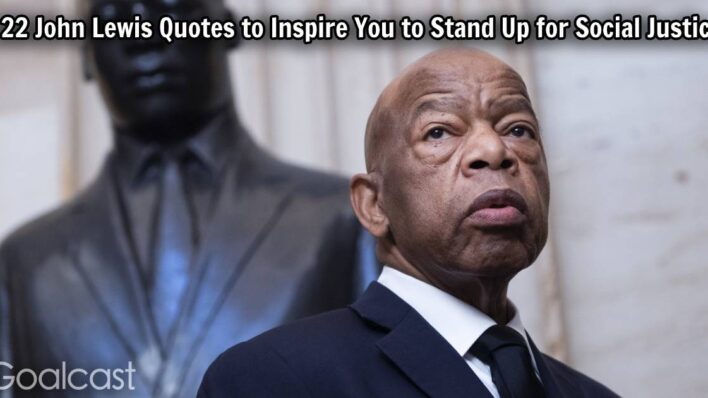 John Lewis has dedicated his entire life to protecting civil rights. Here are 22 John Lewis quotes to inspire you to stand up for social justice.
By Flavia Medrut    September 24, 2020

John Lewis has dedicated his entire life to protecting civil rights. Here are 22 John Lewis quotes to inspire you to stand up for social justice.

As one of the “Big Six” leaders, along with Martin Luther King Jr. who inspired him, Lewis dedicated his life to protecting the rights of Black people in the United States.

Although he grew up in an era of racial segregation, Lewis had a quiet and happy childhood. However, at the age of 17 he left his hometown to attend the American Baptist Theological Seminary in Nashville, Tennessee. That’s where he learned about nonviolent protests and began his lifelong journey as an activist.

Lewis is best known for his chairmanship of the Student Nonviolent Coordinating Committee (SNCC), but also for leading the march that would later become known as the “Bloody Sunday”(1965). While 600 people were demanding the voting rights they had been denied, the march was halted by police violence — Lewis was savagely beaten by a trooper.

Nonetheless, he tirelessly continued his work to get the Voting Rights Advancement Act enacted into law as a way to guarantee every US citizen’s right to vote.

Here are 22 John Lewis quotes to inspire you to stand up for social justice:

You are a light. You are the light. Never let anyone — any person or any force — dampen, dim or diminish your light…

You have to tell the whole truth, the good and the bad, maybe some things that are uncomfortable for some people.

Release the need to hate, to harbor division, and the enticement of revenge. Release all bitterness. Hold only love, only peace in your heart, knowing that the battle of good to overcome evil is already won.

Not one of us can rest, be happy, be at home, be at peace with ourselves, until we end hatred and division.

I believe in freedom of speech, but I also believe that we have an obligation to condemn speech that is racist, bigoted, anti-Semitic, or hateful.

The vote is precious. It is almost sacred. It is the most powerful non-violent tool we have in a democracy

Freedom is not a state; it is an act. It is not some enchanted garden perched high on a distant plateau where we can finally sit down and rest. Freedom is the continuous action we all must take, and each generation must do its part to create an even more fair, more just society.

A democracy cannot thrive where power remains unchecked and justice is reserved for a select few. Ignoring these cries and failing to respond to this movement is simply not an option — for peace cannot exist where justice is not served.

But we’ve come too far; we’ve made too much progress to stop or to pull back. We must go forward. And I believe we will get there.

What I try to tell young people is that if you come together with a mission, and it’s grounded with love and a sense of community, you can make the impossible possible.

These young people are saying we all have a right to know what is in the air we breathe, in the water we drink, and the food we eat. It is our responsibility to leave this planet cleaner and greener. That must be our legacy.

I believe race is too heavy a burden to carry into the 21st century. It’s time to lay it down. We all came here in different ships, but now we’re all in the same boat.

Rosa Parks inspired me to find a way to get in the way, to get in trouble… good trouble, necessary trouble.

Nothing can stop the power of a committed and determined people to make a difference in our society. Why? Because human beings are the most dynamic link to the divine on this planet.

Take a long, hard look down the road you will have to travel once you have made a commitment to work for change. Know that this transformation will not happen right away. Change often takes time. It rarely happens all at once.

Too many of us still believe our differences define us.

There’s nothing wrong with a little agitation for what’s right or what’s fair.

The scars and stains of racism are still deeply embedded in the American society.

Sometimes I feel like crying, tears of happiness, tears of joy, to see the distance we’ve come and the progress we’ve made.