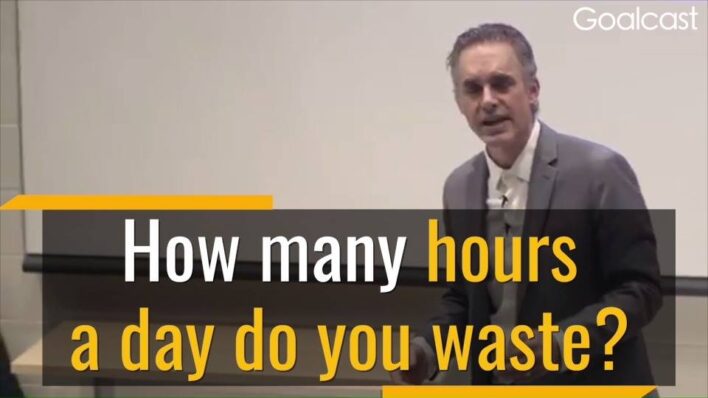 Jordan Peterson: Life isn’t Everything It Could be

Jordan Peterson – Live Your Potential Psychology professor Jordan Peterson gives a lecture about the importance of living out your
By Goalcast    September 29, 2017

Psychology professor Jordan Peterson gives a lecture about the importance of living out your true self and the impact it can have.

How many hours a day you waste or how many hours a week you waste. The classic answer is something like four to six hours a day and so if your life isn’t everything it could be, you could ask yourself, well what would happen if you just stopped wasting the opportunities that are in front of you? You’d be who knows how much more efficient, 10 times more efficient, 20 times more efficient. That’s the Pareto distribution. You have no idea how efficient, efficient people get. It’s completely, it’s off the charts. Well and if we all got our act together collectively and stopped making things worse, because that’s another thing people do all the time.

Not only do they not do what they should to make things better, they actively attempt to make things worse because they’re spiteful, or resentful, or arrogant, or deceitful, or homicidal, or genocidal, or all of those things all bundled together in an absolutely pathological package. If people stopped really, really trying just to make things worse, we have no idea how much better they would get just because of that. So, there’s this weird dynamic that’s part of the existential system of ideas between human vulnerability, social judgment, both of which are major causes of suffering and a failure of the individuals to adopt the responsibility that they know they should adopt.

If you take people, and I’ve told you this, and you expose them voluntarily to things that they are avoiding and are afraid of. That they know they need to overcome in order to meet their goals, their self-defined goals. If you can teach people to stand up in the face of the things they’re afraid of, they get stronger. And you don’t know what the upper-limits to that are, because you might ask yourself, if for 10 years, if you didn’t avoid doing what you knew you needed to do, by your own definitions, right? Within the value structure that you’ve created to the degree that you’ve done that. What would you be like?

Well, there are remarkable people who come into the world from time to time and they’re people who do find out over decades long periods, what they could be like if they were who they were. If they said, If they spoke their being forward and they get stronger, and stronger, and stronger and we don’t know the limits to that. We do not know the limits to that. So you could say, well in part perhaps the reason that you’re suffering unbearably can be left at your feet because you’re not everything you could be and you know it. And of course, that’s a terrible thing to admit and it’s a terrible thing to consider, but there’s real promise in it, right? Because it means that perhaps there’s another way that you could look at the world and another way that you could act in the world. What it would reflect back to you would be much better than what it reflects back to you now.

Now of course, that the means that the person you’re with has to deal with the full force of you in all your ability and your catastrophe and that’s a very, very difficult thing to negotiate but if you do negotiate it, well at least you have something, you have somewhere solid to stand, and you have somewhere to live. You have a real life and It’s a great basis upon which to bring children into the world for example, because you can have an actual relationship with them instead of torturing them half to death, which is what happens in a tremendously large minority of cases. Because it isn’t merely that your fate depends on whether or not you get your act together and to what degree you decide that you’re going to live out your own genuine being. It isn’t only your fate, it’s the fate of everyone, that you’re networked with.

You think well, there’s seven billion people in the world and who are you? You’re just one little dust mote among that seven billion and so it really doesn’t matter what you do or don’t do, but that’s simply not the case. It’s the wrong model, because you’re at the center of a network. You’re a node in a network, of course that’s even more true now that we have social media. You’ll know 1,000 people at least over the course of your life and they’ll know 1,000 people each and that puts you one person away from a million and two persons away from a billion. That’s how you’re connected and the things you do, they’re like dropping a stone in a pond, the ripples move outward and they affect things in ways that you can’t fully comprehend and it means that the things that you do and that you don’t do are far more important than you think.