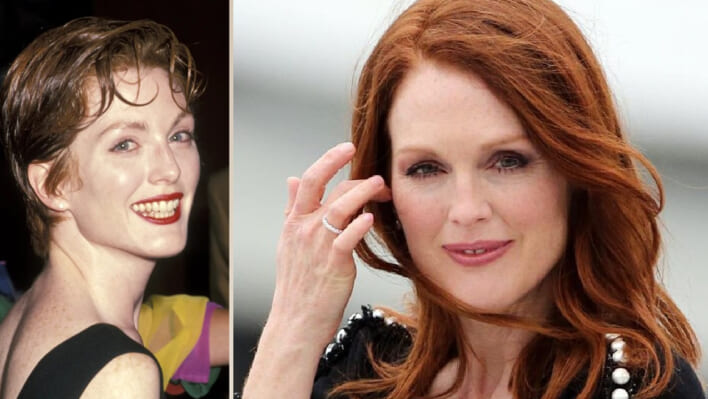 At 60 years old, Julianne Moore is one of the world’s most beautiful women. But the actress hasn’t let that go to her head.
By Barbara Pavone    November 17, 2022

At 60 years old, Julianne Moore is one of the world’s most beautiful women. But the actress hasn’t let that go to her head.

Julianne Moore is one of Hollywood’s biggest actors with a successful career spanning nearly four decades and yet, she hasn’t been immune to self-doubt. Despite being an A-lister, Moore has admitted to feeling the pressure of unrealistic beauty standards and is particularly self-conscious about her freckles.

It began when she was a child and felt she didn’t belong because of her red hair and fair complexion. As she told The Sunday Times in July 2022, “When I was growing up in the U.S., it felt as if no one had freckles [and] I just wanted to look like every other tanned American kid.”

Eventually, she realized there was nothing she could do about it and she stopped obsessing, but she admits it still bothers her occasionally. “I still see somebody in a backless dress with no freckles and I’m like, ‘Oh! I would love that!’” she revealed.

It’s a sentiment she previously shared with Tatler (via People) when, in 2019, she confessed, “I still don’t like them [and] I’d prefer not to have them.” That being said, she learned a valuable lesson over time: “It’s okay to have something you don’t love. It’s really alright.”

Indeed, these days, Julianne Moore is all about embracing who she is and inspiring others to do the same. In 2021, she made headlines when she slammed the notion of “aging gracefully” and her reasoning will both surprise and inspire you.

While beauty standards are slowly growing and evolving towards acceptance, we still have a long way to go. However, when it comes to redefining what it means to age, big names are helping to shake up the norm by stepping up and standing their ground.

Everyone from Jennifer Lopez to Cameron Diaz and Naomi Watts have publicly shut down the notion that you can’t be beautiful, successful, and thriving after a certain age. One of the most outspoken stars, though, has been Julianne Moore who is encouraging everyone to embrace aging and accept it for what it is: a mere fact of life.

Moore first broached the subject in a 2021 interview with As If magazine in which she slammed the term “aging gracefully” as “totally sexist.” Explaining her stance, she argued, “There’s so much judgment inherent in the term ‘aging gracefully.’ Is there an ungraceful way to age?” she asked, noting how aging is not a choice. Rather, everyone has to go through it, whether they want to or not. “It’s not a positive or a negative thing, it just is,” she reasoned. “It’s part of the human condition, so why are we always talking about it as if it is something that we have control over?”

That notion is rooted in some inspirational advice she received from Helen Mirren who once told her, per W magazine, “Aging is a requirement of life: You either grow old or die young.”

Not only does Julianne Moore want to banish the idea of “aging gracefully,” but she’s also a firm believer in overhauling what it actually means to age. As she told The Sunday Times, it’s not something that should be seen as a nuisance, nor should it be taken for granted. “It seems so silly to talk about it as something negative when it is a privilege to continue to age,” she mused.

RELATED: 2 Powerful Mindset Hacks to Embrace Aging and Turn It Into an Advantage

The Dear Evan Hansen star elaborated on that idea in her interview with As If magazine (via Page Six), saying it’s time to look at aging as an opportunity. “Shouldn’t aging be about inner growth?” she asked, encouraging readers to embrace life and ask themselves, “How do we continue to challenge ourselves, to interest ourselves, learn new things, be more helpful to other people, be the person that your friends and family need or want? How do we continue to evolve? How do we navigate life to have even deeper experiences? That’s what aging should be about,” she concluded.

Now in her sixties, Moore is adamant that there’s nothing to be afraid of as you get older, but she’s also the first to admit that can be easier said than done. “I don’t think it goes away entirely, I don’t think there is a person in the world who couldn’t care less,” she admitted to The Sunday Times.

It’s Time to Approach Aging From a Different Angle

Her trick to pushing age aside? Focus your energy on more important priorities. “The degree to which you are interested in that, and the fruitlessness of that, becomes apparent as you get older,” she told the mag, adding, “I think it’s because you have other things that you are interested in, such as family, relationships, work, or your community [so] being myopic about the way you look recedes.”

As Julianne Moore so rightly argues, it’s time to curb talk of “anti-aging” and approach the subject of growing older from a different perspective. The simple, undeniable truth is that aging happens to everyone and trying to fight it is a waste. As the star told Vanity Fair, “It’s not possible to age one way or another; we simply age.”

It’s up to us to make the most of life — at any age. Rather than worrying about something as trivial as a number, take that energy and redirect it towards more important endeavors, like friends, family, and career.

As we grow, we are continuously presented with new opportunities for joy and fulfillment and that’s something worth celebrating. Moore sure had it right when she said, “Every stage in your life is a valuable one.” Now that is a lesson we should all carry with us.