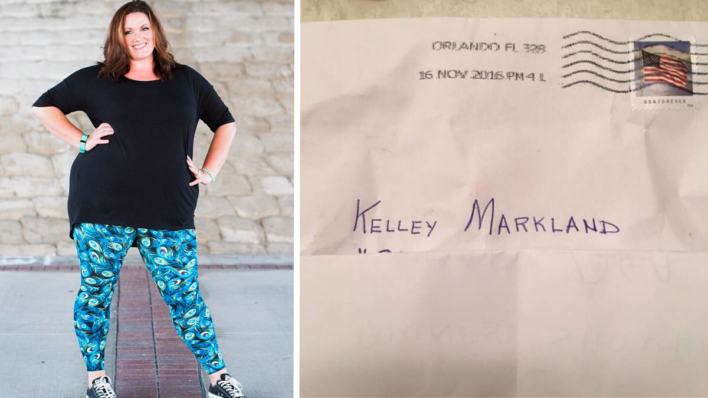 One Florida teacher was shocked when she received a note fat shaming her in her mail, but her colleagues had a supporting message for her.
By Sophie Tolias    January 25, 2022

One Florida teacher was shocked when she received a note fat shaming her in her mail, but her colleagues had a supporting message for her.

Substitute teacher, Kelley Markland, of Port Orange, Florida, thought the days of being bullied were far behind her. But one day, when returning home from celebrating her daughter’s birthday, she found an anonymous note in the mail mocking her weight and go-to wardrobe item: leggings.

The envelope included a photo of the backside of an unknown woman and picture of a meme featuring Anchorman character Ron Burgundy saying: “Your pants say yoga, but your butt says McDonald’s.” And there was a handwritten note reading: “Women who weigh 300 pounds should not wear yoga pants!” The letter wasn’t signed, and the envelope did not have a return address.

“I open my mail to find this envelope with a silly picture (not me in that picture BTW) and a note. Apparently, I weigh 300 pounds and I shouldn’t wear leggings anymore,” she wrote.

“Anyone who knows me, knows that I care deeper and stronger than many. I am a sensitive woman and I despise cruelty towards others. At 36 years old, I am STILL being made fun of. Whoever sent this, be an adult and tell me who you are. JUST TELL ME!!!”

On Monday, fearing the person who sent the note might be a student, Markland was self-conscious getting dressed. But she couldn’t let the bully win, so she showed up to school in her favorite pair of leggings.

I had to remember, if I walked around defeated and scared, then whoever sent that letter wins. And I wasn’t going to let that person win. At all.

At school, Markland received another surprise: Nearly all her co-workers, including a male colleague, came to work in leggings.

“All the teachers were coming up and hugging me and showing me their leggings,” Markland told TODAY. “So I knew at that point, it’s not about me anymore, it’s about all women.”

Her friend and kindergarten teacher, Cindy Martin, said word spread quickly after Markland posted it on Facebook. “The entire staff, we were all just heartbroken for her because she is the nicest, most giving person in the world,” she said.

We definitely wanted a message out there that we are not going to put up with bullying. We teach this in the classroom all the time.

Markland continued to receive support online, including from strangers who told her they had bought and worn their first pair of leggings in her honor.

While Markland is disturbed at the thought that someone would look up her address and mail her such a hateful note, a small part of her wants to thank the bully.

Only because they started a positive movement by sending me that letter. Their intention was for me to feel bad and stop wearing leggings. Instead, women all over will gain more confidence.

Something hurtful and senseless turned uplifting and inspiring when Markland ignored her bully’s note and showed up to school in leggings. And her colleagues’ act of solidarity sent a clear message that bullies don’t win. By standing up for the person being targeted, you show that you’re against a bully’s abusive behavior.

stand up for others
Love is always more powerful than hate.