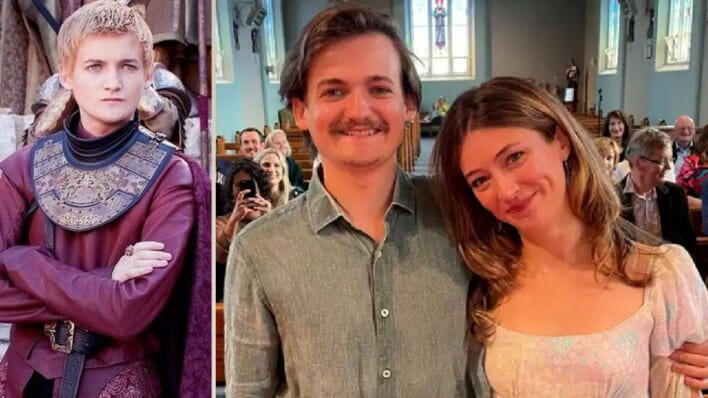 Jack Gleeson’s recent wedding ceremony was beautiful and understated. It showed us that marriage doesn’t always have to come with a big production of a wedding. He’s not the first celebrity who’s chosen privacy above all else when it comes to tying the knot. Let’s explore the details of Gleeson’s wedding and other celebrities who have paved the way for intimate weddings.
By Bianca Mercuri    September 7, 2022

Jack Gleeson’s recent wedding ceremony was beautiful and understated. It showed us that marriage doesn’t always have to come with a big production of a wedding. He’s not the first celebrity who’s chosen privacy above all else when it comes to tying the knot. Let’s explore the details of Gleeson’s wedding and other celebrities who have paved the way for intimate weddings.

If you’re a die-hard Game of Thrones fan, then you probably heard that King Joffrey actor Jack Gleeson recently got married – and his wedding was not what was expected. Sometimes we envision the big Hollywood names living a life that’s just as big. Quite the contrary, more and more Hollywood alumni are opting for quiet and peaceful weddings, the opposite of what they endure day to day.

With the unspeakable success of the series, many Game of Thrones actors try to steer clear of the spotlight in their personal lives as much as possible. Gleeson happens to be one of the most private, holding a small wedding that fits his humble personality.

Gleeson got married to his long-time girlfriend Róisín O’Mahony at the Sacred Heart Church in The Glen, Ballinskelligs, County Kerry in Ireland.  The simple ceremony was private and more casual than you’d expect. Father Patsy Lynch took to Twitter, posting photos of the couple in a button-down shirt with slacks and a pink and blue sundress. Lynch accompanied it with, “Very simple, prayerful and dignified marriage ceremony for Film Celebrity [Jack] Gleeson and Róisín [O’Mahony].” Though the Tweet was taken down shortly after.

The linen shirt worn by Gleeson and the almost iridescent dress from O’Mahony showed the playfulness of their nuptials and reflected the “happy memories” that they have in Ballinskelligs, The Glen. According to Lynch, the family had been holidaying there for years, making it the perfect location for a quaint ceremony.

Unlike the massive and dramatic wedding of his on-screen persona of King Joffrey, Gleeson’s ceremony had a “sheer simplicity that just touched everyone,” as Lynch said. “Everyone down here knows Jack and that shows they’re just part of the whole community,” he continued, “When I met him, it was as if we knew each other all our lives, he’s just that kind of person.”

This wedding reflects the calmness and serenity of the couple themselves. Gleeson’s humble nature is no small feat for a large Hollywood actor. O’Mahony is also an actress and director who knows the trials and tribulations that come from living a public life. The couple’s efforts to truly distance themselves from their fame (at least for their marriage) give us insight into how they feel about their careers and the way they choose to separate their personal lives from the public.

What Jack Gleeson Had to Say About Celebrity Culture

Gleeson’s choice of a small wedding ceremony came as no surprise. He’s made his feelings on celebrity culture known and indisputable. In fact, he criticized society’s obsession with celebrities during his speech at Oxford Union in 2014.

“Since the show has aired, I’ve been given an insider look into an ever-pervasive and yet often mysterious aspect of society, namely, our culture of celebrity,” he said, “It was an environment from which I instantly wanted to retreat. I detested the superficial elevation and commodification of it all, juxtaposed with the grotesque self-involvement it would sometimes draw out in me.”

RELATED: Jada Pinkett Smith Shares Why She and Will Smith Don’t Celebrate Their Wedding Anniversary Anymore

The words that Gleeson chose to represent his experience with fame are extremely powerful and telling. Even though 2014 seems like a lifetime ago, his opinion on the subject clearly hasn’t changed as he’s lived up to his words and chosen to distance himself from the life that he describes so harshly.

Gleeson’s dramatic delivery does put everything into perspective for those of us at home who can’t fathom the life fame has subjected him to. In true opposition to his character’s grandiose nature, he also says, “What sort of valuation of the ego would one have once you’ve let it been preyed upon by the public for years and years? Perhaps, it becomes truly just skin and bones.”

Gleeson wasn’t the first celebrity to choose privacy when it came to his wedding. We’ve seen Justin Bieber and Hailey Baldwin at the Marriage Bureau in New York City and know even less about Ariana Grande and Dalton Gomez’s wedding. Let’s look at some other understated Hollywood weddings.

Another Game of Thrones star also felt the need to keep hers low-key. Sophie Turner, known for her role as Sansa Stark, got married to Joe Jonas in May 2019. They got hitched at the Little White Chapel in Las Vegas which is iconic and perfectly represents the humor and playfulness of their relationship.

Hilary Duff and Matthew Koma chose to tie the knot in their own backyard! In December 2019, Duff and Koma got married surrounded by close family and friends in the comfort of their own home. Their wedding was held a secret until the day of, and even involved their daughter Banks who Duff held as she walked down the aisle.

More recently, Jennifer Lopez and Ben Affleck recited their vows in a secret ceremony in Las Vega on July 17. Like Turner and Jonas, they also chose the Little White Chapel. Their second ceremony on August 20 took place at Affleck’s Georgia home with their children, family, and close friends. Both ceremonies were focused on love rather than publicity, which made their photos all the more special to see.