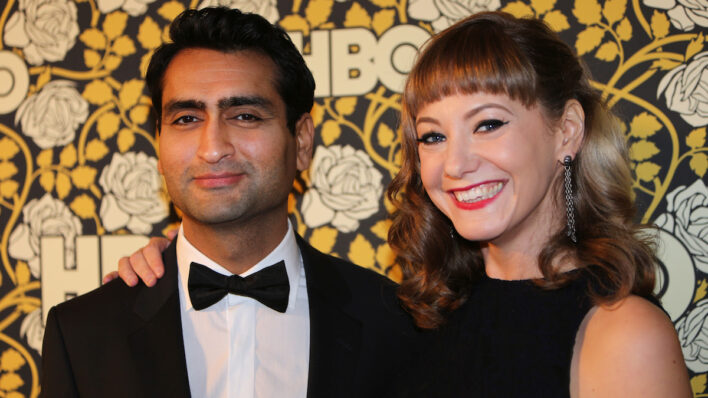 Kumail Nanjiani is quickly rising in the Hollywood ranks and part of his success comes from the movie ‘The Big Sick.’ Based on the true story of his relationship with his wife, it details the incredible obstacles they have to overcome, include her life-threatening medical condition, before their love prevailed.
By Maya Khamala    April 3, 2020

Kumail Nanjiani is quickly rising in the Hollywood ranks and part of his success comes from the movie ‘The Big Sick.’ Based on the true story of his relationship with his wife, it details the incredible obstacles they have to overcome, include her life-threatening medical condition, before their love prevailed.

Those of us wishing hard for life to return to ‘normalcy’ would do well to turn their attention to Kumail Nanjiani’s romantic comedy The Big Sick (2017). Nanjiani plays himself in the movie, which he co-wrote with his wife, Emily V. Gordon. It’s based on their real-life love story, and Gordon’s real-life illness, and is ultimately all about our inherent vulnerability as humans and the constant possibility of being flung carelessly into the great unknown.

See, eight months into dating, Gordon got mysteriously sick and was placed in a medically induced coma while doctors scrambled to stop her organs from shutting down and figure out what on earth was wrong with her.

This is a soulful, emotional, and important film to us as all, especially right now as the entire world as we know it is going through a “big sick” of its own and countless facets of normal, modern life we’ve come to take for granted are showing their flimsiness.

And, because every one of our perceptions of life as we know it overlaps with X number of other people’s perceptions, the film also explores the cultural challenges faced by this Pakistani-American couple.

In sickness and in health

Talk about love prevailing against all odds: first off, Gordon must survive her illness in order for this storied love to stand a chance—which she does, thanks in part to Nanjiani randomly mentioning to the doctors her notably slow healing process post-ankle injury.

That’s when they realized she has adult-onset Still’s disease, an extremely rare form of arthritis found in one in every 100,000 to 500,000 people. The condition can shut down the body’s vital organs and, well, kill a person. Serious, yet treatable once diagnosed!

And by complexity, I mean the intersections that run up and down and all around this world, creating a beautifully intricate and totally not straightforward picture of human experience.

I’m talking gender, race, class, age, and all the different ways we as humans are affected by various outside elements: like tax rates, government policies, and global pandemics—just off the top of my head.

As if the whole health debacle wasn’t enough, Nanjiani and Gordon also had their parents’ reservations to contend with, particularly Nanjiani’s folks, who disowned him when he told them that he was not taking their arranged marriage suggestions seriously on account of his feelings for Emily, a white woman.

And let’s not forget Gordon’s parents’ obliviousness to the realities facing non-white immigrants.

Love against all odds

In order for the doctors to figure out what her condition was, Emily was put in a medically-induced coma that lasted 8 days. During that time, Kumail realized right then and there that all the obstacles of their relationship didn’t matter. He knew right then that wanted to marry her.

Nanjiani has written that the days Gordon spent in a coma remain “the longest we’ve gone without speaking since the day we met.” He recounts passing his time playing Mario Bros while stuck in torturous limbo.

I remember thinking how unfair it was.

Kumail and Emily had a happy ending to their tumultuous courtship. That’s because he learned that when you care about someone enough, all the obstacles become insignificant when faced with the reality of possibly losing them.

As we are going through difficult times during the coronavirus pandemic, their story reminds us that we should stay connected with the people we love and cherish.