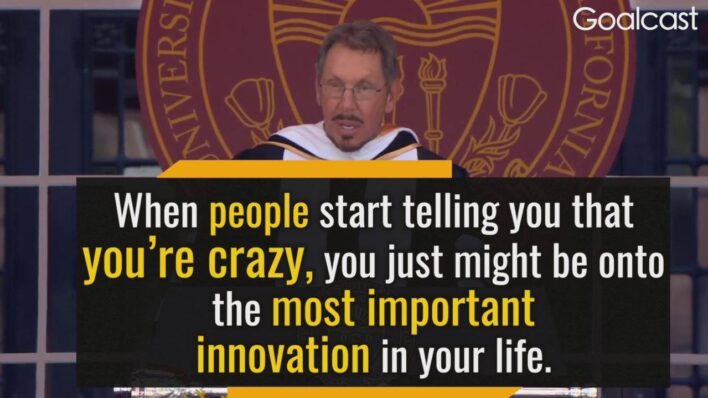 Larry Ellison -Discover Yourself Larry Ellison gives a speech about his relationship with Steve Jobs and how Jobs made him
By Goalcast    August 22, 2017

Larry Ellison gives a speech about his relationship with Steve Jobs and how Jobs made him realize that it’s not all about the money but rather about contributing to society in a meaningful way.

When people start telling you that you’re crazy, you just might be onto the most important innovation in your life. My 30 year friendship with Steve Jobs was made up of a thousand walks. If there was something he wanted to talk about, and there always was, we’d go for a walk. We’d climb to the top of Windy Hill, hike around Castle Rock or through the sands on the beach at Kona Village. Over the years, one particular walk stands out. We had a lot to talk about that day. We jumped in the car, put the top down, and headed out to Castle Rock State Park in the Santa Cruz mountains. It was over 20 years ago back in middle-1995. Steve was finishing up Toy Story at Pixar and running NeXT, the computer company he founded after he left Apple. Apple was in severe distress. It had gone steadily downhill during the 10 years of Steve’s absence. The problems were now so serious people were wondering if Apple would survive. It was all too painful to watch and stand by and do nothing. The purpose of that particular hike through the Santa Cruz mountains on that particular day was to discuss taking over Apple Computer.

Steve just shook his head and said, “I’m not doing this for the money. I don’t want to get paid. If I do this, I need to do this standing on the moral high ground.” “The moral high ground?” I said. “Well, that just might be the most expensive real estate on Earth.”

But I knew I had lost the argument. Steve had made up his mind right there and then at Castle Rock in the summer of 1995 to save Apple his way. At the end of the hike right before we got back into the car, I said, “Steve, you created Apple. It’s your company, and it’s your call. I’ll do whatever you want me to do.” I went on the Apple board. Then I watched Steve build the most valuable company on Earth. The lesson here is very clear to me. Steve was right. After a certain point, it can’t be about the money. After a certain point, you can’t spend it no matter how hard you try. I know. I’ve tried hard. But it’s impossible. In the end, the only practical option is to give nearly all of it away. Why did Steve go back to Apple? Why did he devote so much of what remained of his life to his job? I believe deep inside of all of us, all of us, there’s a primal desire to do something important with our lives.