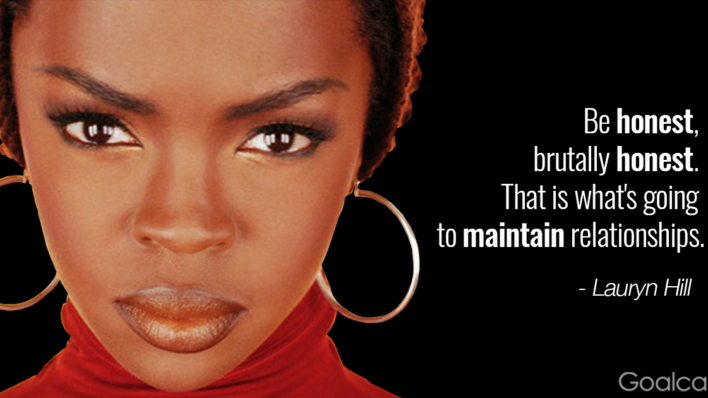 18 Lauryn Hill Quotes to Help You Stay True to Yourself

Lauryn Hill enjoyed success at an early age as an actress but knew international fame after becoming a member of
By Flavia Medrut    August 29, 2018

Lauryn Hill enjoyed success at an early age as an actress but knew international fame after becoming a member of the Fugees, along with Wyclef Jean and Pras Michel.

Hill was only 18 when the band made its debut and after two years she got to the hearts of everyone with the cover of “Killing me Softly”. She soon decided to leave the group as she never got the appreciation she wanted. The public perceived Wyclef as the group’s musical genius, so Hill planned a solo career that would outshine the Fugees’ success.

Said and done, The Miseducation of Lauryn Hill received massive critical acclaim and established her as a rapper, world-class singer and producer. But the public persona she created made her feel like she wasn’t Lauryn anymore.

Lauryn didn’t exactly dislike herself, but she simply could no longer cope with the fact that she needed an impeccable look and behavior every time she left the house. Ms. Hill took a break from all the fame and made some impromptu comebacks every now and then.

Here are 18 inspiring Lauryn Hill quotes and lyrics that you should know. We can’t plan life. All we can do is be available for it.

How you gonna win if you ain’t right within?

All of humanity is living in a dream world, but suffering real consequences. Tomorrow is always another day to make things right.

The only way to know is to live, learn, and grow.

Wake up, you’ve been sleeping. Take up your bed and walk. Stop blaming other people. Oh, it’s nobody else’s fault.

Don’t be a hard rock when you really are a gem!

That strong mother doesn’t tell her cub ‘Son, stay weak so the wolves can get you’. She says, ‘Toughen up, this is reality we are living in.’

The only wealth I have to give is not material and if you need much more than that, I’m not available.

And deep in my heart. The answer, it was in me. And I made up my mind. To define my own destiny. Be honest, brutally honest. That is what’s going to maintain relationships.

Wisdom is better than silver and gold. I was hopeless, now I’m on hope road. I need to be surrounded by people as passionate and as dedicated as I am.

Let’s love ourselves then we can’t fail to make a better situation tomorrow. Our seeds will grow, all we need is dedication.

My emancipation don’t fit your equation.

I wrote these words for everyone who struggles in their youth, who won’t accept deception instead of what is truth.