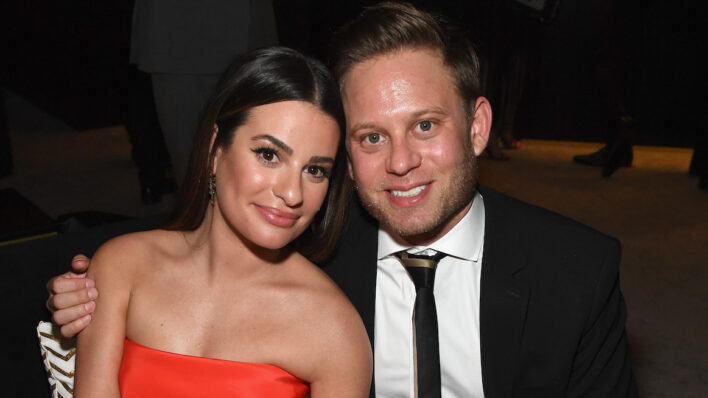 Lea Michele lost Cory Monteith to a drug overdose and had to live her grief in front of millions. Yet, she pulled through and found love again.
By Aly Walansky    May 11, 2020

Lea Michele lost Cory Monteith to a drug overdose and had to live her grief in front of millions. Yet, she pulled through and found love again.

Lea Michele had the life millions envied – a beautiful star on one of screen’s most beloved shows, dating the most popular guy onscreen…and offscreen! But then a tragedy turned her world upside down, and all the plans she had for herself went with him…until she, somehow, found strength and happiness to live once again.

An love story that moved beyond the screen

The two immediately hit it off when they first met on the set of Glee. Lea recalls that Cory was intimated at the prospect of meeting her. His role as Finn was his first acting gig in his life whereas Lea was a seasoned performer. But she was immediately charmed.

From the minute I met Cory, I was like, This is the most handsome man I’ve ever seen in my whole life.

While they secretly dated during the first season, Cory and Lea only made it official later in 2011. “One day we just looked at each other and we were like, ‘You wanna do this?’ We knew,” Lea told Elle Magazine.

And then, in March 2013, Cory entered a rehab program, signaling his history with drugs to the public. A few months later, he was found dead in a hotel room in Vancouver, from an apparent drug overdose. Their beautiful future was in the past.

The loss changed her

Lea’s love for Cory was obvious to many. It went beyond the characters of Rachel and Finn and fans saw it bloom right before their eyes. When Cory met his tragic death, it completely changed her. She had to carry on as the show’s lead without the love of her life.

“I never thought I would be in this position in my whole life,” Lea confessed. Glee went on a hiatus when Monteith died, but then the fifth season started and Michele had to continue her private mourning in public.

Cory and Lea had formed a powerful pair on the Glee set.

Before Cory passed away, Lea was definitely the leader on set, and so was Cory. She has been an absolute trouper. She’s the reason we’re back at work right now instead of taking a season off.

She shared her grief with millions of fans…

Michele also felt the need to pull her life together for the fans, who had suffered a loss as well. It was actually the thought of remembering Cory that pushed her onward to finish the show.

Now that I am in this position, you can choose to rise, and that’s what I’m going to try to do. I know that Cory would want nothing more than for me to take this situation and use it to help people. I don’t know if I will. I don’t know how.

Michele continued to work and perform a variety of high-profile roles in the public eye while privately mourning her great love, but there was a light at the end of the tunnel.

I wanted to make sure that I was a whole person again and that no one was coming into my life to put me back together.

Lea dated Matthew Paetz for nearly 2 years, but alas, that relationship was not meant to last. In fact, it freed her for her second chance at a happily ever after.

They had their siblings as their best man and maid of honor, but we were sort of the closest in the friend area, and we sat next to each other.

At first, the two didn’t get to talk, as the bride insisted on sitting next to Lea. But fate would have them run into each other again, as they shared similar friends and went to the same events. Soon enough, Lea and Zandy started dating.

The change in her was immediately noticed.

I’m very happy and I think that you can tell. I don’t really talk a lot about my personal life, but I’m also the kind of person where I always say, ‘You will see how happy I am just by looking at my face.’ I can’t hide it.

A big part of Michele moving on was finding joy in the memories, rather than be devastated by how the joy ended. “There are some who bring a light so great to the world, that even after they have gone, the light remains,” she posted to Twitter in 2018, as a way to remember Cory.

But the talented actress also turned to her craft to remember him: singing. In 2014, she released a solo album called Louder, in which she commemorates Cory. One of the songs, “If You Say So” is titled after the last words he ever spoke to her and was a collaboration with Sia.

The process was not easy but it certainly was therapeutic. “I said [to Sia], ‘I feel like I’m starting to just sink in it, and he would never want me to do that,” Lea confessed to Elle. “I need to remember that you have to live, because you can want to die.’ ”

To Lea, the process of remembrance has become a positive one. In fact, it was integral to her recovery.

We may not have gotten to share a lifetime together…but the memories…they’re the best of my life.

Her resilience not only honors Cory, but it also proves that we are capable of moving forward, even from tragedies we think we could never survive. Lea’s very mature approach to grieving has led her to meet the second love of her life, when she was mentally ready for a relationship to bloom.