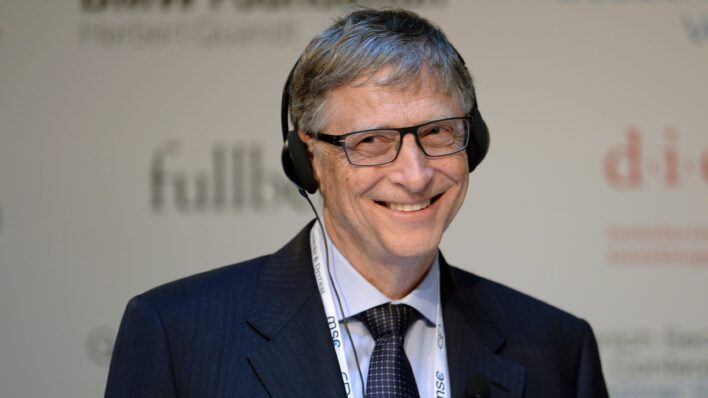 As the founder of Microsoft Corporation, Bill Gates is a legendary pioneer in science, math and computers, revolutionizing the world
By Lindsay Tigar    March 4, 2019

As the founder of Microsoft Corporation, Bill Gates is a legendary pioneer in science, math and computers, revolutionizing the world with his research and expertise. These days he works part-time while running the Bills & Melinda Gates Foundation, an expansive charitable initiative he runs alongside his wife of 24 years.

Though he is known for many feats — including being the second richest person in the world with a networth of $89.9 billion –there is one great love is he outwardly vocal about: reading. Every year, he release the books that changed his perspective, taught him something new or impacted him greatly. These have included everything from fiction and non-fiction to biographies and beyond.

RELATED: According to Bill Gates, This Book Will Teach You to Stop Worrying and Start Living Anxiety-Free

If you want a glimpse into the type of reads Bill Gates couldn’t put down, here are a few to add to your reading list.

If you want to unique perspective on the world we’re living in now and how we are positioned for the future, this might be the type of investigative, riveting read you’re looking for. Especially since it’s at the top of the list for Microsoft’s founder. Gates doesn’t simply like this book, but says it is the best book he’s read in a decade and if he could recommend just one book for someone to read, it would be this one. “I’m all for more reason, science, and humanism, but what I found most interesting were the 15 chapters exploring each measure of progress,” he raved. “Pinker is at his best when he analyzes historic trends and uses data to put the past into context. I was already familiar with a lot of the information he shares—especially about health and energy—but he understands each subject so deeply that he’s able to articulate his case in a way that feels fresh and new.”

For Gates, the beauty of this deep-dive is just that: how willing the author is to use data sources to pull out ‘unexpected signs of progress.’ “I tend to point to things like dramatic reductions in poverty and childhood deaths, because I think they’re such a good measure of how we’re doing as a society. Pinker covers those areas, but he also looks at more obscure topics,” he wrote on his blog.

Measure What Matters by John Doerr

If you work at a start-u — or any forward-thinking type of company — you’ve probably heard the term ‘OKR’ as a way to measure goals and progress. This concept was developed by the author of this book, and is something Gates is a fan of. On his blog, he detailed a personal experience when he put himself in a tricky situation that taught him a valuable lessons. In the early days of Microsoft, he was confident in his coding skills but was still getting a grasp on project management, which he shares became ‘abundantly clear’ when he promised Intel that he’d deliver a form of their basic software in four weeks. “They thought I was crazy to promise it that fast, and it turned out that they were right. We were two weeks late,” he shared.

To his rescue — and serving as one of his mentor — was what Gates called a ‘precise, hard-driving guy’, Andy Grove. “…Andy oversaw their strategy and operations, and he championed the idea of management by objective. Andy and I became friendly over the years, I studied several of the business books he wrote early on, and Microsoft adopted some of the methods that Intel used. I consider Andy one of the great business leaders of the 20th century,” he explained.

And the way Andy ran the show? It’s based on Doerr’s OKR — Objectives and Key Results — management system. This book describe why this is an effective way of measuring employees, company metrics and beyond. “I’d recommend John’s book for anyone interested in becoming a better manager—and I’d say that even if I hadn’t been interviewed for a super-nice chapter about the Gates Foundation,.” he shared in his blog.

Little known fact about Gates that might not be all that surprising: while he usually feels as if he can’t put a book down, he doesn’t subscribe to the genre of ‘page turners.’ Except for this one read that he said was so compelling, he couldn’t tear himself away from each and every last paragraph. So what’s it about? A gripping glimpse into the reality of the Silicon Valley, based on a true story. “Bad Blood tackles some serious ethical questions, but it is ultimately a thriller with a tragic ending. It’s a fun read full of bizarre details that will make you gasp out loud. The story almost feels too ridiculous to be real at points—no wonder Hollywood is already planning to turn it into a movie). I think it’s the perfect book to read by the fire this winter,” he shared in his blog.

Prepare to cry, since this one will definitely get right to your soul. Even for Gates, who didn’t love ‘The Last Lecture’ or ‘Tuesdays With Morrie’, two of the most infamous tear-jerkers about death. Though he’s a fan of this best-selling book as a hole, he called out the epilogue specifically as a time when he chokes up, where the wife of the author writes: “I visit his grave often, taking a small bottle of Madeira, the wine of our honeymoon destination. Each time, I pour some out on the grass for Paul … and rub the grass as if it were Paul’s hair. Cady [their daughter[ visits his grave before her nap, lying on a blanket … grabbing at the flowers we’ve laid down.’

It’s one of those books that Gates knows he’ll read again, just to take more away from the pages. “This short book has so many layers of meaning and so many interesting juxtapositions—life and death, patient and doctor, son and father, work and family, faith and reason…,” he continued. “I don’t know how Kalanithi found the physical strength to write this book while he was so debilitated by the disease and then potent chemotherapy. But I’m so glad he did. He spent his whole brief life searching for meaning in one way or another—through books, writing, medicine, surgery, and science. I’m grateful that, by reading this book, I got to witness a small part of that journey.”

Gates calls this recent best-seller an amazing story—and one that reminded him of the Netflix documentary, ‘Wild, Wild Country.’ “Both explore people who remove themselves from society because they have these beliefs and knowledge that they think make them more enlightened. Their belief systems benefit from their separateness, and you’re forced to be either in or out,” he explains.

He appreciates Westover’s approach to detailing her upbringing, never being what Gates considers cruel, but being honest. “It’s clear that her whole family, including her mom and dad, is energetic and talented. Whatever their ideas are, they pursue them,” he continued. “I was especially interested to hear her take on polarization in America. Although it’s not a political book, Educated touches on a number of the divides in our country: red states versus blue states, rural versus urban, college-educated versus not.”

A tantalizing look into the education system, family dynamics and self-imposed expectations, Gates says Westbrook captures all of these growing pains beautifully. “It’s the kind of book that I think everyone will enjoy, no matter what genre you usually pick up. She’s a talented writer, and I suspect this book isn’t the last we’ll hear from her. I can’t wait to see what she does next,” he raved in his blog.