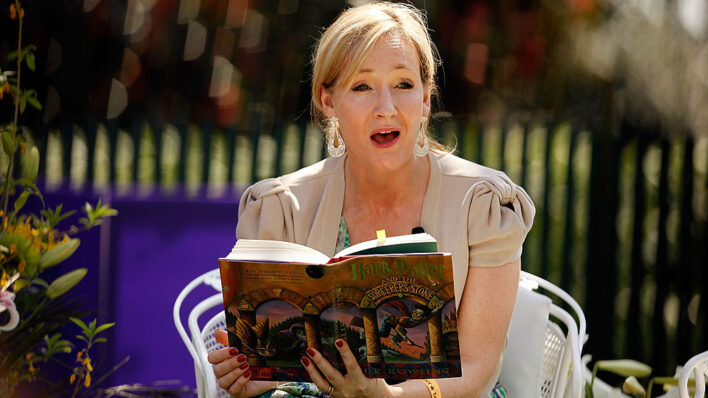 One thing is for sure: if the planet’s most successful author recommends a book, you can probably rest assured it’ll
By Lindsay Tigar    April 3, 2019

One thing is for sure: if the planet’s most successful author recommends a book, you can probably rest assured it’ll be a page-turner. As the only writer to create a billion-dollar fortune — not only as a woman but between both sexes — JK Rowling is a legend. She penned the iconic and beloved Harry Potter series, rising from a suffering single mother to one of the planet’s more regarded wordsmiths.

Many writers will credit their constant flow of inspiration to reading the work of others like them, and Rowling is no different. She reads a bit of everything but unsurprisingly, mostly fiction. If you want a glimpse into what this British author reads and adores, here are a few of her must-reads:

The Woman Who Walked Into Doors by Roddy Doyle

Rowling calls Roddy Doyle a genius — and her favorite living writer. Though she’s read much of his work, she a particular fan of this novel. In an interview with The Oprah Magazine, she raved: “This novel in particular — about a woman’s relationship with a violent man — was one of the most important books in her life. “I don’t think I’ve ever encountered such a believable, fully rounded female character from any other heterosexual male writer in any age.”
>> SEE IT ON AMAZON.COM

Ever find one of those reads that you quite frankly, can’t put down? Every reader is lucky to stumble upon a book they become mesmerized with from time-to-time, and this is one for Rowling. “I lived in it the way that you do with truly great books; putting it down with glazed eyes and feeling disconcerted to find yourself in the 21st century. I met the author at a reception in the American Embassy in London last year, and I was so excited that I was bobbing up and down on the spot like a 5-year-old,” she told The New York Times.
>> SEE IT ON AMAZON.COM

Every author reaps fodder from different sources, whether its art, other novels or daily living. For Rowling, this book particularly impacted the Harry Potter series. In fact, she told The Oprah Magazine that more than any other book, she turned to this one. “Goudge was the only one whose influence I was conscious of. She always described exactly what the children were eating, and I really liked knowing what they had in their sandwiches,” she shared.
>> SEE IT ON AMAZON.COM

Little Women by Louisa May Alcott

While Rowling penned characters that will last generations — and then some — Louisa May Alcott did the same with her legendary classic, Little Women. It struck a chord with Rowling and perhaps, influenced her decision to be a wordsmith. “My favorite literary heroine is Jo March. It is hard to overstate what she meant to a small, plain girl called Jo, who had a hot temper and a burning ambition to be a writer,” she told The New York Times.
>> SEE IT ON AMAZON.COM

The Iliad by Homer

Another famous read that many page through in high school or college, there’s definitely a staying power that comes with Homer’s work of literature. In the end of Harry Potter and the Goblet Of Fire, Rowling referenced this Greek household read, and even discussed her reasoning with Entertainment Weekly. “That really, really, REALLY moved me when I read that when I was 19. The idea of the desecration of a body, a very ancient idea… I was thinking of that when Harry saved Cedric’s body,” she shared.
>> SEE IT ON AMAZON.COM

One of those books that you oddly can’t put down, but you’re also uneasy reading is this provocative classic. Often raising questions and challenging ethical standards, writers digest these difficult reads and allow them to inform their next work. For Rowling, this book evokes emotion, according to what she shared in an interview with BBC Radio 4. “There are two books whose final lines make me cry without fail, irrespective of how many times I read them,” she continued. “One is ‘Lolita.”
>> SEE IT ON AMAZON.COM