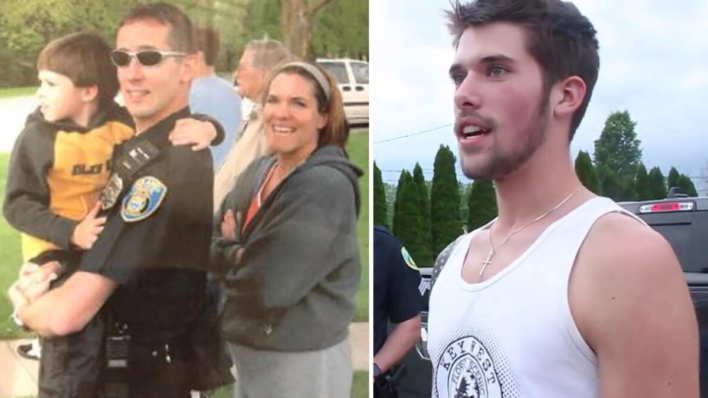 One young man from Michigan was touched when his father’s old colleagues showed up to support him on his special day.
By Sophie Babinski    June 17, 2022

One young man from Michigan was touched when his father’s old colleagues showed up to support him on his special day.

Graduating from high school is a big deal for any person. It signals the end of childhood and the beginning of a new life as an adult — one with more independence and the freedom to live by your own values and principles.

For one young man in Michigan, high school graduation meant more than just an important step towards the future, it was also an important way to honor the past.

Why One Young Man Invited Michigan Police to His Graduation Party

Micah Schieber was only six-years-old when his police officer father collapsed and died while running a marathon in 2007. The young father, who was only 35-years-old then, left behind three children including Micah and a 33-year-old widow. The family was able to pick up the pieces thanks to Micah’s father’s wonderful colleagues on the police force.

At his funeral, hundreds of fellow officers showed up to pay their respects and express their love for the fallen officer. This outpour of love and support had a profound effect on Micah, who always remembered the officers’ presence and held them close to his heart. That’s why, on the day he graduated from high school, he called on the officers once again for support.

When Micah decided he would have a graduation party, he decided to invite all of the local cops. While he hoped that some of them would show up, he didn’t get his hopes up since his party would be on a Friday night — one of the busiest nights of the week for the police force.

RELATED: Former Police Officer Fired For Saving A Life On Duty Gets Vindication

However, on the day of the party, he got an amazing surprise when 18 officers pulled up to the party, lights flashing in celebration of their old friend’s son. Micah was overcome with pride and joy, and he gave the police officers gift bags he had made for them, as well as a gift he had crafted in his welding class in their honor.

Having that little part of him within the police station come to my party was very important to me just so that I felt like my dad was still with me.

Micah was so proud and happy to have the police officers, who mean the world to him and his family, at his celebration. Even though he lost his dad when he was very young, he tries hard every day to keep his memory alive.

People talk about my dad with such high respect that I want to be just like him. I want people to talk about me like that.

Luckily, those around him have also kept his memory alive and Micah can rest assured that wherever he goes and whatever he accomplishes, his father is right there by his side, cheering him on.

honor your loved ones
“What we have once enjoyed deeply we can never lose. All that we love deeply becomes a part of us.” — Helen Keller
Tags
Share
← Prev Post Next Post →