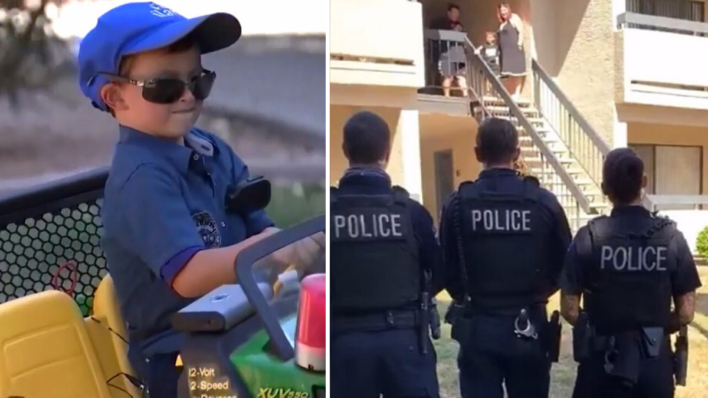 As children, many of us learned the hard way that any toys left outside were likely to be stolen. A boy from Tempe, Arizona, learned this lesson too. But in his case, some officers made it up to him.

Four-year-old Gerald was playing outside with his Gator, a small battery-operated car he could drive around. But in a quick second while nobody was watching the car was stolen.

When Peter Philbrook, the boy’s father, realized what had happened, he was heartbroken.

Peter and his son had spent months working on the vehicle, which they found by a dumpster. It was more than just a toy, it was a bonding project.

Peter posted the story to Facebook and explained how he would sell whatever he could as a reward for someone to bring it back to him.

The wife of Patrol Sergeant Andrew Brooks saw the heartfelt request and showed her husband.
“My wife said to me, ‘Hey you have to take care of this dude. You have to do something,’” Sgt. Brooks told FOX 10.

After unsuccessful attempts to find the Gator, Brooks reached out to a local Walmart and the Tempe Officer’s Association to secure enough money to buy Gerald a brand new one.

Brooks and Gerald’s parents organized a small event to surprise him with his new gift.

He thought he was just coming out to meet some friends at the park. Little did he know he was meeting some adult friends here to make a kid’s day.

How Tempe Police Surprised a Little Boy With a Thoughtful Gift

The heartwarming event was recorded and as we see Gerald walk out of the apartment, a line of officers parts to reveal a shiny green John Deere Gator.

“We deal with so many negative things in the world and there is so much negativity. Just to be able to bring some joy is awesome. It’s a good feeling,” Patrol Sergeant Andrew Brooks told FOX10.

Shocked, Gerald walks up as Brooks explains why he’s giving him the new toy. Nothing can replace the time and bonding that went into the original toy, but this surprise comes close. Thanks to these officers, a sad childhood memory turned into a special memory Gerald will always remember and cherish.

Kindness Lasts Forever
“An act of kindness may take only a moment of our time, but when captured in the heart the memory lives forever.” ― Molly Friedenfeld
Tags
Share
← Prev Post Next Post →