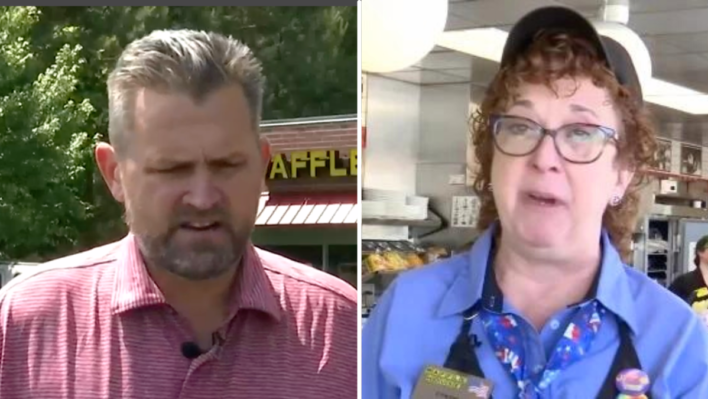 The community would not let one woman fight the battle alone.
By Sophie Tolias    November 16, 2022

The community would not let one woman fight the battle alone.

Cynthia Morrison, a server at the Waffle House along Dallas Acworth Highway in Paulding County, never forgets a customer’s face.

Employed at Waffle House for 37 years, with the last eight years at this location, Morrison says her favorite day to work is Christmas Day. She never misses it, and that’s another reason she’s so popular.

“Most of the time I know their order, their drink, their name,” said Morrison. “If you know their name, it makes them feel special.”

Her customers think she’s special too.

Joey Godfrey is one of those customers. He has been a regular at the restaurant for six years and Morrison and her smile are the main reason.

“It’s just rare these days that every time you interact with somebody, they’re smiling and happy,” Godfrey told WSB-TV.

When Morrison missed a few shifts, Godfrey noticed, and he asked her what was going on. It turned out that behind that smile, Morrison had been keeping a secret.

“She leaned in and said, ‘I got diagnosed with bone cancer. I was diagnosed back in March,’” Godfrey said.

RELATED: Pastor Receives Incredible Service From His Pregnant Waffle House Waitress – So He Decides to Change Her Life

Morrison said she was diagnosed with stage 1 multiple myeloma. She had had been quietly undergoing chemotherapy at home and had a poor reaction. She had many more weeks of treatment and a bone marrow transplant ahead of her but never planned to share her diagnosis with customers.

Morrison’s health scare comes months after she lost her brother to cancer and her mother to COVID-19.

Last year, Godfrey lost his stepdad to cancer and has a close friend of his is currently fighting the disease. So, Morrison’s health news hit him hard, and knowing she wasn’t the type to ask for help, he felt he had to do something to assist her.

The day she opened up to him, Godfrey left her a $120 tip. But his generosity didn’t stop there, he also set up a GoFundMe page for Morrison and rallied up her loyal customers (and there are a lot) to contribute.

How a Community Came Together to Help Their Favorite Server

He drove away that day and pulled into a parking spot a few blocks away and cried.

“I cried like I haven’t cried since the day I got the call my mom had passed away. I don’t know why but this absolutely tore me up to the point it took almost 20 minutes for me to compose myself. I don’t know if it’s because she has waited on me dozen of times since she got the news and I had no idea or maybe because I know she has been with Waffle House for almost 30 years and was proud she had only missed a handful of days,” he wrote in a Facebook post.

“I post this not to say look at me I did something good today! I post this because I want this lady to get absolutely showered with love and money by everyone that passes through. You never know what someone is going though no matter how normal they look on the outside. If you are near the Waffle House at the corner of Cedarcrest and 92 stop in and ask for Cynthia,” the post continues before he shares the GoFundMe link.

Four hundred and seven donations have been made on the GoFundMe page and they have raised $20,200 of the $25,000 goal to help Morrison with her treatment and her time off work.

How One Server Appreciates the Kindness Coming Her Way

“My Saturday morning won’t be complete while you are out. Much love for you!” someone who donated wrote on the GoFundMe page.

“Always a smile! You got this Ms. Cynthia,” someone else wrote.

“We’re newer to this area, but we’ve met Ms. Cynthia a few times already. She’s always so sweet to our children. You truly never know what someone else is going through! Praying for her,” another one wrote.

RELATED: Waitress Gets Caught On Camera Helping Elderly Man Cut His Food – What Happens Next Changes Her Life

She said she appreciates the money, but nothing beats the kindness coming her way.

“I’ve had a few tears along the way,” she told WSBTV. “Hearing them say I was their favorite waitress really lifted my spirits.”

They say that tough times reveal true friends. Morrison knows she’s not alone in her battle. Everyone she has treated with kindness, clearly wants to return the love.