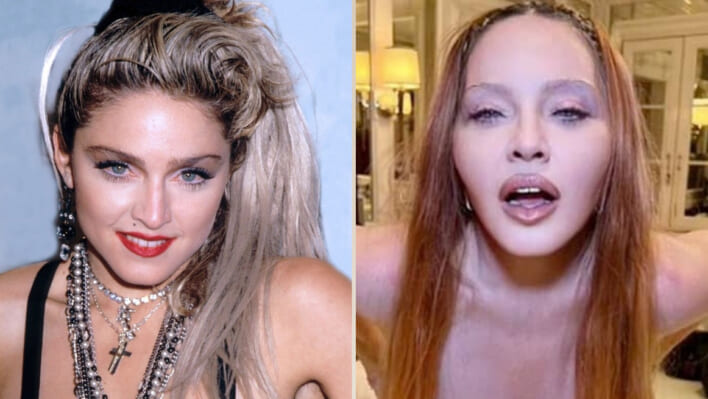 At 64, Madonna Upsets Everyone With a World Tour—Proving She Doesn’t Care What You Think

The biggest-selling female artist of all time proves that her crown is not set to retire anytime soon.
By Rhea Kristen    January 19, 2023

The biggest-selling female artist of all time proves that her crown is not set to retire anytime soon.

At the age of 64, an age when many artists are set to a low profile, Madonna is set to take the world by storm (again). On Wednesday, the singer, songwriter, actor and director announced that she is going to embark on a world tour.

RELATED: 5 Times Madonna Completely Destroyed Your Perception of Women Over 50

The “Celebration Tour” was announced in typical Madonna fashion—completely unpredictable. The mother of four deleted all of her social media posts on Instagram and has now dedicated her page exclusively to her tour promo.

She spilled the news during a game of Truth or Dare with a surprising group of A-listers including Jack Black, Lil Wayne, Amy Schumer, Eric Andre, Bob the Drag Queen, and Diplo.

Madonna As the Polarizing Icon

Madonna is no stranger to the creation of headlines, and the most notable aspect of her career has been her ability to stir news and controversy wherever she goes.

When she reached global stardom, she often chose to break the rules in all ways. Her fashion, which popularized the use of the crucifix necklace drew attention for her attempts to sexualize religion.

One of her greatest hit songs, “Papa Don’t Preach,” was criticized for encouraging teen pregnancy back when it was released in 1986. In 1989, Pepsi pulled a commercial with Madonna over her choice to kiss a Black priest in her music video for Just Like A Prayer.

And who could forget that moment from the 2003 VMA’s when Madonna kissed both Britney Spears and Christina Aguilera on stage. It’s safe to safe that Madonna has always done things on her own terms, and while it’s paved the way for other pop divas like Lady Gaga and Britney Spears, some say that her actions are too controversial, and now, she’s too old to do these things.

Madonna is touted as an artist who birthed a new style of tours, with glitzy stage sets, unconventional dancing and insane stage production. As of 2022, Madonna remains the highest grossing female touring artist of all time, according to Billboard. She has embarked on 12 world tours, and while many have questioned why she has decided to embark on perhaps the biggest tour of her career- and the best answer to that might be from an interview Madge gave back in 2021 to V Magazine.

During her Madame X Tour in 2019-2020, she experienced ill health and complications, but that didn’t stop the songstress. Nothing seems to.

RELATED: Tupac’s Letter To Madonna Reveals The Sad Truth About Their Romance

“I had no cartilage left in my right hip, and everyone kept saying, ‘You gotta stop, you gotta stop.”

In the same interview, Madonna added, “I don’t think about stopping. I could have done a stadium tour, greatest hits, and made a billion dollars.”

Critics may say what they want, but Madonna has solidified herself as one of the greatest performers in history. Her records alone have sold 300 million units worldwide, and her tours are consistently breaking their own records. Her new tour might just make history once again.

Always Be True To Yourself

Ageist comments towards the artist are simply white noise to the icon. Madonna’s life and career are the perfect examples of not listening to anyone and staying true to yourself.

RELATED: Madonna Reveals the Ugly Truth About Being a Woman and Turning 60

There will always be haters and detractors, but being able to stay true to your authentic self (no matter how plain or outrageous) is what counts the most, and will lead you to your personal success. However we feel about Madonna, she has dedicated her life to creating her own image and not letting others tear her down. As we all should.