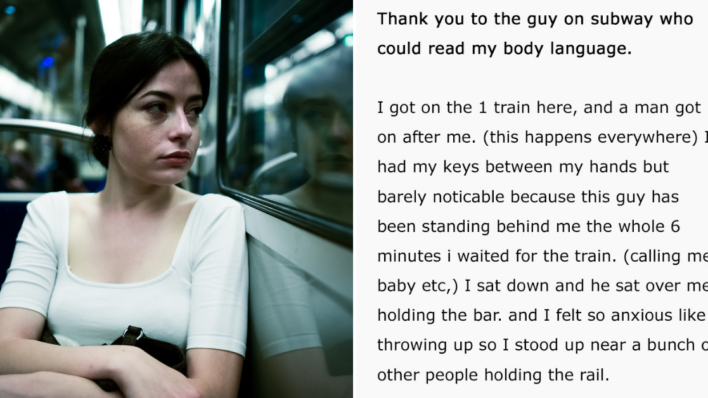 Being a woman alone on a subway can be a scary situation, especially in lonely and isolated locations – and
By Aly Walansky    January 25, 2021

Being a woman alone on a subway can be a scary situation, especially in lonely and isolated locations – and recently a woman’s worst fears were realized when she was nearly attacked on a subway.

A scare on the subway

Recently, a Reddit user shared a story about how she was en route to visit a friend when she was approached by a creepy man on the subway.

“I felt so anxious like throwing up so I stood up near a bunch of other people holding the rail,”

“I got on the 1 train here, and a man got on after me. (this happens everywhere) I had my keys between my hands but barely noticeable because this guy has been standing behind me the whole 6 minutes I waited for the train. (calling me baby etc.) I sat down and he sat over me holding the bar. and I felt so anxious like throwing up so I stood up near a bunch of other people holding the rail. Then this guy says to me “hey Lauren. you going to Jeff’s dinner party too?”

I was confused for a sec because he was staring at me and my name isn’t Lauren. it took me like 10 seconds to even realize what he was doing. I said yeah. and he said ‘perfect timing we can walk together. what stop were you going to get off on” and I told him. then he says look what Jeff texted me and handed me the notes app which had ‘are you ok?’ and he kind of moved to side so I could write in it.

I told him this guy was following me. He ended up getting off my stop with me and walked me all the way to my friend’s apartment. When he was supposed to get off at 103. The guy soon left mostly because this guy was way bigger than him thankfully. I have never been in a spot like that and I always told myself what I’d do in a situation like that but I just froze and shut down. I am so thankful men like him are out there and aware of situations like that. In New York most people really keep to themselves so thank you very much Michael. wherever you are. I am sorry I made you late. But you were like my guardian angel,” she posted on Reddit.

Thankfully, this woman did not become a statistic and was helped out by a stranger in her moment of need. Not only did the stranger, named Michael, step in at the right moment, but he also took the time to make sure she got to her friend’s place safely.

Be an everyday hero

We need more people like Michael in the world. Always pay attention to your surroundings and always, if you can, be there for a person in need. There’s no telling how much of a difference you can make just by trusting your gut or noticing something seems off.