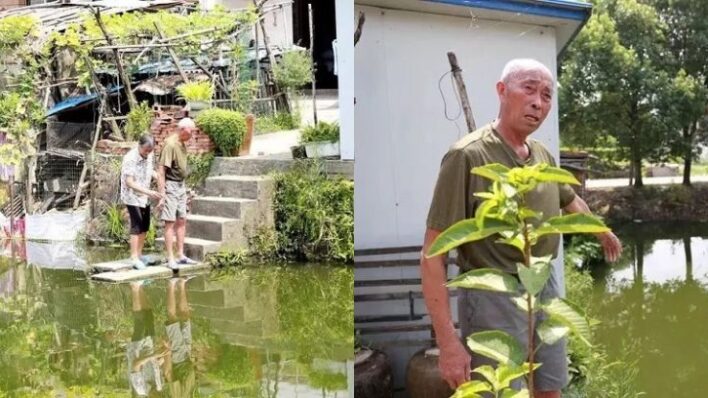 Hero of the Week: 80-Year-Old Saves Drowning Child, Only to Realize He Also Rescued His Father 30 Years Prior

The world can be a dark and dangerous place, but selflessness has the power to prevail in the most heartbreaking
By Eliza Theiss    August 10, 2018 80-year-old Xu Weifang lives a quiet retired life in the town of Zhutang, Jiangsu Province about 30 miles from the Classical Gardens of Suzhou, the 1,000-year-old UNESCO World Heritage gardens. But life by the river sometimes gets rather exciting — in fact, sometimes it becomes downright scary. The river can be treacherous, especially for those who can’t swim, as one young boy was about to find out.

On the morning of August 3rd, Xu and his wife’s peace was suddenly broken when they heard frantic cries for help from the river, shanghai.ist reported.

They both rushed out to see what was happening and found an 8-year-old boy who was barely staying above the water. He had been playing with his grandmother by the river and fell in, as they would later learn. Having lived by the river for decades now, this wasn’t the first time Xu and wife Wu Xiaomei saw people’s lives threatened by the river. And just like before, they jumped into action.

In fact, the octogenarian had a bad fall down a flight of stairs two years ago, and never managed to fully recover since then.

But that didn’t stop him from doing everything he could to save the young boy. He got into the water with the help of his wife and pulled the boy to safety, making the boy the fifth person the couple rescued from the river.

Not content with simply pulling the boy from the water, the couple couldn’t help but wonder if he was OK.

Xu went to the hospital to see if the 8-year-old was doing better and got a massive surprise: he knew the boy’s father.

The most incredible part? Xu knew the father, because he had rescued him from the same river some 30 years prior. Although back then Xu was more spry. “When I was younger, [the boy’s father] was drowning in the river and I jumped to save him,” he recalled for Jiuangsu Television.

Since that fateful day 30 years ago Wu and Xu have saved four other people from drowning in the same river. Always willing to lend a hand, the hero couple does hope that their help won’t ever be needed again though, as their age might soon prevent them from rescuing others.