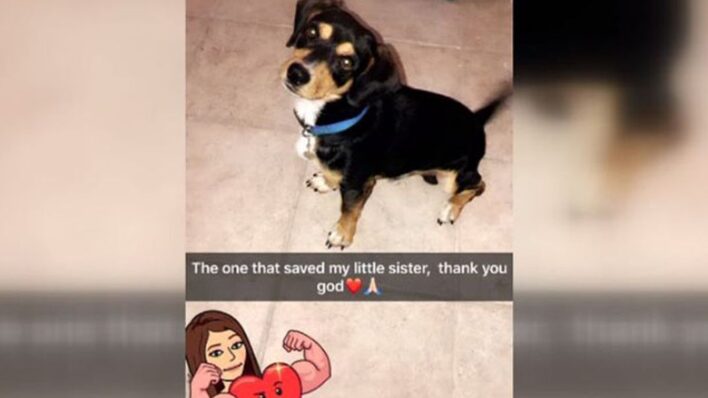 Hero of the Week: 15-Pound Beagle’s Loyalty Saves Young Girl from Kidnapper, Teaches Us a Universal Lesson in Bravery

It was supposed to be an uneventful day in Pasadena, Texas. Ray, a cute-as-a-button beagle mix was out for his
By Eliza Theiss    September 7, 2018

It was supposed to be an uneventful day in Pasadena, Texas. Ray, a cute-as-a-button beagle mix was out for his walk, enjoying his time out-and-about. It was supposed to be just like a million other trips around the block for the tiny pupper. Walking him was one his many human buds, an 11-year-old girl, part of his extended human family. Ray, as always, was enjoying himself. But things took a dark turn for the beagle. And even darker, and more dangerous, for his walker. For her own protection, authorities have not released her name, but Ray’s sixth-grade walker came close to a nightmare. In fact, the 11-year-old’s life has already changed, faced with the darkest sides of humanity.

Because this regular walk in the neighborhood turned out to be anything but ordinary. As the 11-year-old’s sister Bianca Hernandez told media outlets, the young girl noticed a man “looking at her strangely.” That in itself was disconcerting enough, but the suspect then followed through with his dark looks.

The man actually got out of his car and grabbed her. The young girl resisted to the best of her efforts, but this was an adult man preying on a child. She was loosing the battle. But Ray was not going to stand by and let someone hurt his friend. He may weigh only 15 pounds, but the 2-year-old pup bravely jumped in with all he had, and bit the attacker. As the victims’s sister Bianca told local outlets, the pup quickly realized something was not right. “The dog was like, ‘Uh-uh, this is not a regular person greeting her’, so yeah, he went for a bite in the leg, and that was the only way for her to free herself,” Bianca Hernandez disclosed.

And Ray’s quick reaction and loyalty allowed the young girl to free herself from the attacker’s grip and run home, miraculously unhurt. Ray too, got away unhurt. When the young girl’s family realized what had happened, they quickly took action. Uncle Alan Aguilar chased after the suspect on foot, but the attacker got back in his car and got away.

For now. As it turns out, the terrifying incident took place within the Willow Oaks Townhomes, a housing complex equipped with surveillance cameras. And the eye in the sky got a clear picture of both the suspect’s face and license plate, giving police a major advantage in investigating the case.

Meanwhile, the young survivor is home safely with her family, and Ray, the 15-pound protector, is being hailed as a hero online for rescuing her from kidnapping.  At home, Ray is probably enjoying more belly rubs and puppy treats than he knows what to do with — as any brave pup should.

While authorities continue to investigate the harrowing incident, information remains scarce. One thing remains certain: Ray’s loyalty was crucial to the young girl’s escape, and we can only hope he chomped down on the attacker with all his 15-pound might.

For more Hero of the Week: